A Blaster of 2017 Stadium Club

I was recruited to be a substitute summer softball coach for an 18U ASA tourney this weekend, which was hosted in a nearby town. We had a little downtime between games so I hit their local Wal-Mart and was surprised to find a number of Stadium Club blasters on the shelves. The three big blue stores in my neck of the woods were devoid of the product, so I gleefully snagged a blaster and made my way to the checkout counter.

In a pretty exceptional mood after my purchase, I wondered across the parking lot and treated myself to a plate of Bob Evans' biscuits and gravy. Typically, this is something I only treat myself with after donating blood, but I felt like celebrating.  I feel the gravy helps thicken up my blood after losing a pint. At least that's what I tell myself!

Don't get me wrong, I was happy to finally find a blaster and not have to pay LCS prices, but I feel I picked the wrong one.  Let's dive in and you'll see why.

Everyone is after the Aaron Judge cards and the autos, but I'm here for the photography. 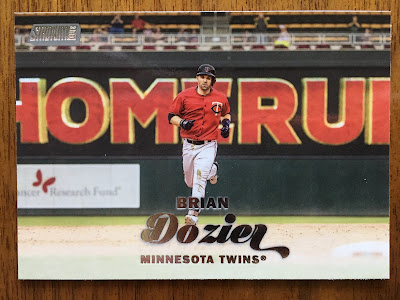 What a neat shot of Brian Dozier during his home run trot. 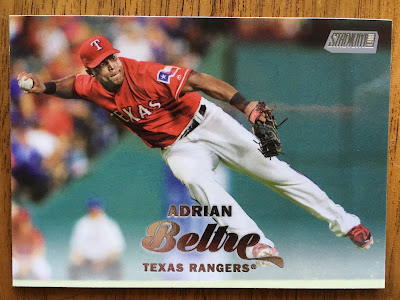 The bare-handed play by a third baseman is probably my favorite defensive play in baseball. I would argue this takes more skill than robbing a batter of a homer. Adrian Beltre is perfectly framed in this photo. What a gorgeous card! 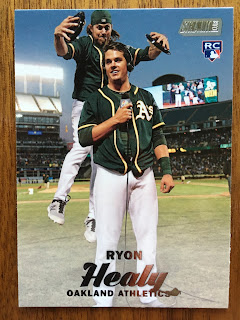 Sneak attack! If you've ever been around the game, then you know a baseball team is about camaraderie. It's one of the reasons I still coach... it's really special to feel you're a part of something bigger, like a team. I think Ryon Healy will feel that in just a moment! Great, great card! 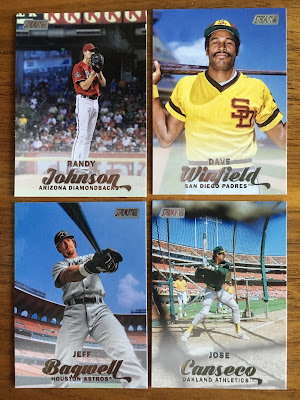 The Dave Winfield is my favorite from this bunch. I love the mustard yellow jersey and his facial expression, which reads "I'm one bad dude and I know it." The Jose Canseco picture is from the outer side of the batting cage, which is a first for me. 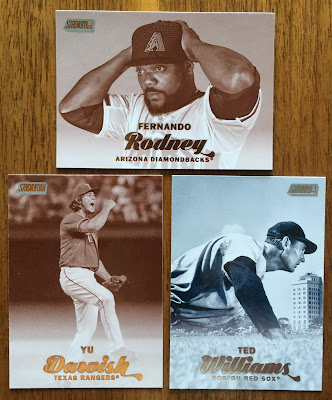 Above are the parallels I enjoyed the most. There's gold and black foil, but I really dig the sepia. Do you think Fernando Rodney is looking into a mirror to make sure his hat is crooked enough to his liking?  I thought the Ted Williams card was a black and white parallel, but I've come to learn this is the base card. Teddy Ballgame doing pushups in spring training?  Pretty cool!

Two Cubs in the blaster and I suppose I can't complain. Fifteen of the 300 base cards are Cubs, which is exactly 5% of the set. Five percent of 40 cards in a blaster is two. 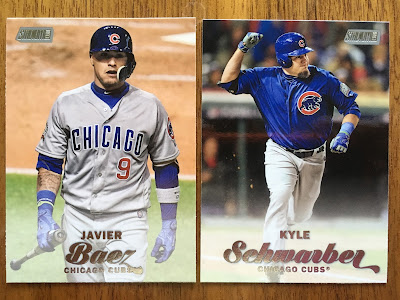 I wish it would have been Ryne Sandberg, David Ross or Ben Zobrist. Derrek Lee would have been cool, too. I still believe in Schwarber and I'm not quite sold on Javy Baez being with the Cubs on August 1st. I'd trade him straight up for 2.5 years of Sonny Gray, but I'm no Theo Epstein.

I pulled a couple of other inserts, but nothing fancy, so let's show what did raise an eyebrow. 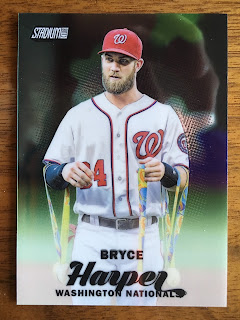 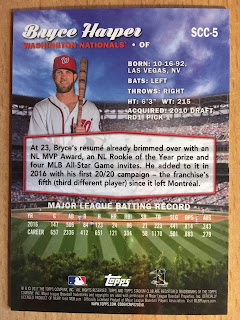 I had no idea what this card was at first, but I've since learned it's one of the chrome cards that are new to Stadium Club this year. There are also chrome refractors, but this is not that version. Bryce Harper isn't a bad pull. For the record, I believe those are exercise binds draped from his arms.

Here's why this blaster was not meant for me. First, allow me to remind you that I live on the border between Cardinal and Cub territories. Also, I've now pulled two autos this year and they're of the same player. Argh. 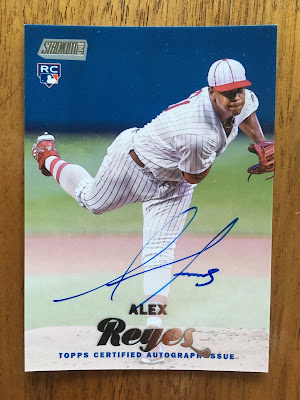 Alex Reyes is sporting a throwback jersey, which is kind of neat, but he is a Cardinal. With my luck, there's probably a Cardinal fan in the area cracking into a blaster right now and pulling a Cub auto. It is what it is.

I road tripped to a card show this weekend, in Milwaukee, but I couldn't find any of the thirty dealers who had busted any Stadium Club. I was hoping to find some in a dime box or maybe buy a starter set on the cheap. One dealer was selling hobby boxes for $120 and another for $110, but I decided to pass on those. I think I'll skip the set building again this year and instead turn my focus to chasing the 2017 Vogelmonster cards.

I hope your weekend was full of fun cardboard, too! Thanks for reading!