I was at my grandfather's residence yesterday watching a little baseball and Jean Segura made another nice place and threw a short-hop over to the Mariners' first baseman Danny Valencia. I thought it was an easy pick, but somehow it caught the heal of Valencia's glove and the runner was safe.

"Vogelbach could have made that play."

Yeah, that was the first thought in my head. Vogelbach has been playing first since high school, and honestly probably before that. He's not known for his range or footwork, but the dude can flat out pick it.  Danny Valencia? He's not a natural first baseman and is kind of learning the position on the fly in 2017.  For what it's worth, Valencia's current OPS of 0.764 is 19th out of 24 first base qualifiers in the MLB.

Then this popped up in my Twitter feed this morning:
Yep. That's the same Mike Montgomery, a pitcher, who was traded to the Cubs for the Vogelmonster last July. Baseball is a funny game, but this is just not right! 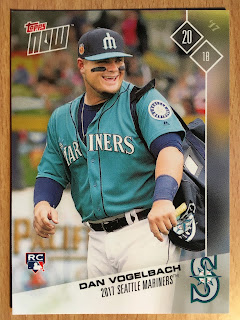 Vogelbach is hitting 0.368 over his last ten games for Tacoma (AAA) and according to his Topps Now card, he appears to have his bags packed and ready to go!