A Home Run of an Addition

Last Monday evening Aaron Judge grabbed America's attention with the mammoth home runs he was hitting in Miami. Maybe you didn't know, but at about the same time Dan Vogelbach was in Tacoma making his way through the AAA version of the home run derby.

The Vogelmonster hit seven homers in the championship round, but was bested by Bryce Brentz, from Pawtucket of the International League. Rumor has it Bryce Brentz has been drug tested every day, and twice on Sunday, since the derby. (Yeah, not a legit rumor, but it makes me feel better about Vogelbach coming in second.)

Vogelbach is my favorite player in professional baseball right now. Part of it is because I truly believe he can mash, but it's also because he's a very hard worker AND he's a great guy.  Here's a little snippet from the above linked article backing up his character:

Wow, Vogelmonster mashes his way to the finals and gives the credit to his bullpen catcher. Outstanding!

To celebrate a nice night in Vogelbach's career, how about a new card?  I've been sitting on this one for awhile and it's the crown jewel of my Vogelbach player collection. 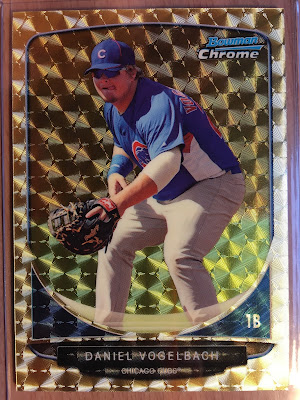 Yep, it's first my superfractor and it's simply glorious in all of its shiny refractory! 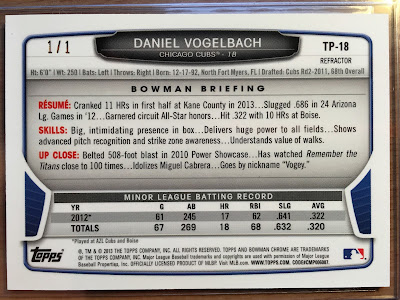