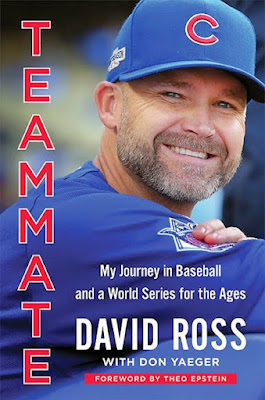 Ease of Reading: This was a really quick read for me. The print is fairly large, it's well written, I'm a fanboy of David Ross and the World Series Champion Cubs. The 242 pages really never stood a chance.

Synapse: The formatting of the book really kept things flowing. In chapter one the book starts with the morning before Game 7 of the World Series, but also in chapter one we learn about David's baseball path before he was drafted by the Dodgers. Periodically, journal entries from Ross' iPhone are introduced to chronicle the play of the 2017 Cubs throughout the season. As the chapters increase in number, the story lines of Game 7, David's career, and the Cubs 2017 season continue to move to a common culmination. I found it fascinating how there seemed to be a lot of give and take between the three different story lines and how easy it was to follow each of them as the pages turned.

Comments: I thoroughly enjoyed reading how David Ross blossomed into a clubhouse leader and truly embraced the role even though he was "just" a back-up catcher. I could sense his passion for winning, family, and his teammates and he detailed the peaks and valleys of attempting to balance all three without pulling any punches as an author. As a high school baseball coach I was looking for some characteristics which Ross really thought were important in being a good teammate and leader. Here's how I interpreted his words:
1. Work Ethic - Work hard and with pride. It's an easy way to gain respect.
2. Trust - Being a part of a team is as much about trusting in your teammates as anything else.
3. Make an effort to get to know everyone and what makes them tick.
4. Don't be afraid to call someone on the carpet when it needs to be done. This is probably the most difficult for many people. If you do the first three points though, then this last one is maybe a little easier for others around you to swallow.

Grade: I asked my sister to give this book to me as a birthday present when I first learned about. I waited a little while to get my hands on it, at no fault of my sister, but when I finally had a copy I pretty much devoured it. I haven't ripped through a book at that torrid of a pace in quite some time. Is it forevery baseball fan?  Probably not. It helps to be a Cub fan or be to be interested in being a better teammate, and it certainly helps to be both, like myself. Heck, if you're into baseball biographies and autobiographies then this one is for you, too. I may be a little biased, but I'm going to grade it out as 'A' material. It hit all my expectations and even brought occasional tear to my eye. Well done, Mr. Ross.
Posted by P-town Tom at 7/23/2017 01:14:00 PM