... of 2017 Bowman. Zippy Zappy got me with this "click-bait" title the other day, and then finished it with a repack. The repack was fun and all, but it left me craving freshly released Bowman. 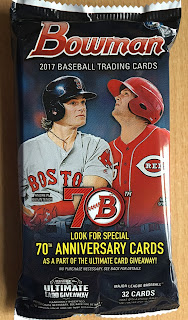 We cancelled baseball practice on Friday due to the soggy weather and the fact that we weren't scheduled to play Saturday. This little extra bit of free time was all I needed to sneak away to my LCS and purchase the jumbo pack seen above. 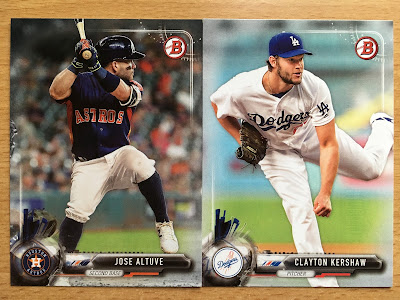 I found a couple of nice stars on top of the pack. Altuve and Kershaw would actually qualify as superstars in my book.

I really like the design of this year's Bowman offering. I'm tempted to buy a box, and probably would if it were summer, but I'm just too busy right now to really sit down and enjoy ripping a box of cards nice and slow like. 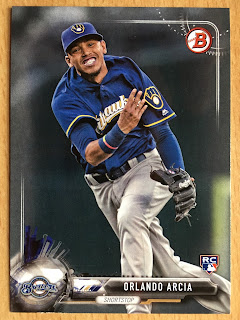 Here's a couple of prospect cards of guys whose names I recognize. Brent Honeywell throws a pretty solid screwball from what I have read. Rafael Devers will soon make all the Boston fans forget the Pablos Sandoval experiment at third base. 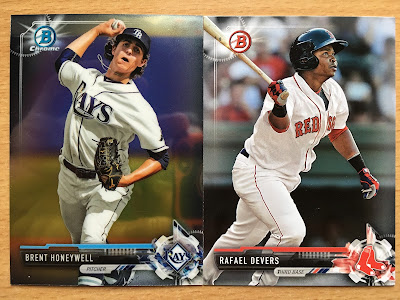 For what it's worth. I think the chrome cards are very sharp looking.

Thirteen cards into the thirty-two card jumbo pack and I had already pulled four Cubs. 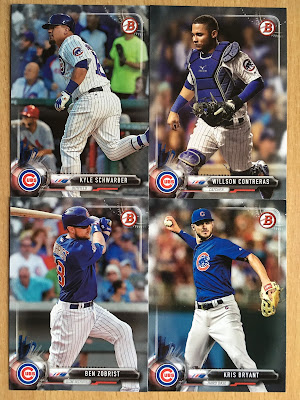 Talent Pipeline?!?  These cards are great looking in hand and I love that there's one player representing each of the three main levels of the minor league system. 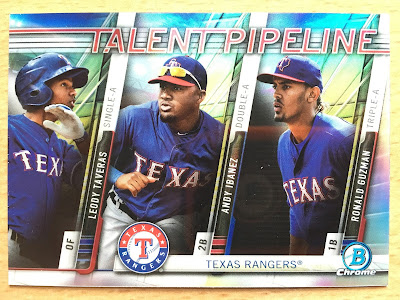 The above card was hiding an auto. Yeah! 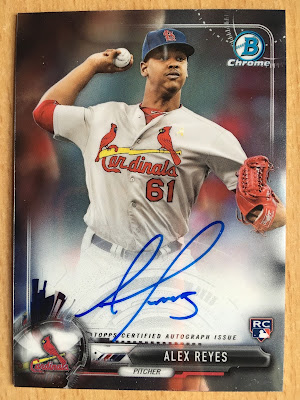 Of a Cardinal. Who blew out his elbow. Booo!  Man, so I guess this pack wasn't meant for me.

I did find one more Cub in the back half of the pack, and it's of the prospect who has arguably the highest ceiling in the system. 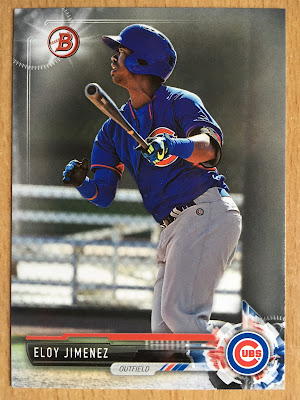 This isn't Eloy Jimenez' first Bowman card, but it's a nice get for a Cub fan like me. This card was selling for three bucks at the LCS and I almost pulled the trigger. Glad I didn't!

So, there's my Bowman jumbo pack, which scratched that pack ripping urge that Zippy Zappy planted in my head a few days ago. I don't think I did too badly either.

If anyone is interested in the Alex Reyes autograph, then give me a holler. Otherwise, I'll probably sit on it for a couple of years and then sell it when he's back healthy and making batters look foolish.