AJ, the blogger known as The Lost Collector, has become one of my most frequent trading partners.  I seem to pull quite a few Yankees when I'm ripping packs, and AJ is the beneficiary of my cardboard which features players in those classic pinstripes.

Let's see what The Lost Collector sent back this time.  He seemingly has a never ending supply of Cubs cards!

Below is a 1997 Topps Stadium Club card doesn't mention which team Jody Reed plays is playing for.  The Cubs were bad in 1996 and I would be hard pressed to name five other Cubs not named Grace or Sosa.  I don't think Reed played for the Cubs, and he was a middle infielder, so I'm guessing he's the one turning the double play. 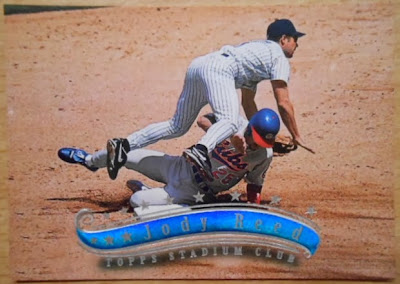 A quick flip to the back and my hunch is confirmed.  Reed is the Padre turning the twin killing.  Officially, this is not a Cubs card, but no matter.  Who is the Cub taking him out at second base?  After a little research on baseballreference.com I've deduced it is none other than Luis Gonzalez.
It's still a sweet double play card even though Luis is making the cameo and not Reed.

Here's another card featuring a play at secondbase, but this time I think it's a straight steal.  This 1998 Upper Deck card of Doug Glanville will soon find its way into a binder.  Yes, I have a mini collection of Glanville cards.  I appreciate his baseball insight, he's a good Twitter follow (@dougglanville), and he's a pretty decent writer.  So yes, I'm hoping someday to bump into and get his autograph. This just might be the card! 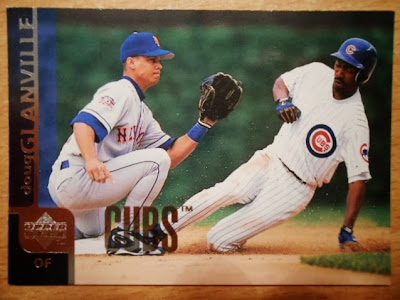 Here's two more cards of random Cubs who I have deemed to be "Binder Worthy."  Heathcliff Slocumb is one of the first Peoria Chiefs I remember watching in person to have success with the Cubs.  This 1993 Topps card is one of his earlier cards.  Turk Wendell?  Yeah, quirky pitchers need to stick together, so I have a couple pages of Turk as well. 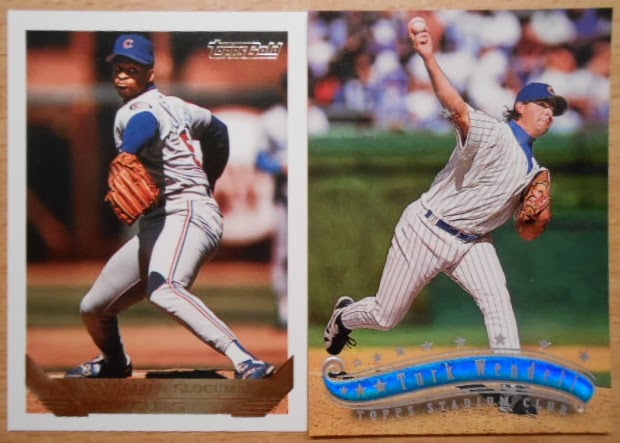 Here's a couple of my favorite outfielders from past Cubs squads.  The 1995 Donruss card of Tuffy Rhodes reminds of when launched three home runs on Opening Day in 1994.  The card on the right is a 2012 Topps Series 2 card of Kim DeJesus' husband.  I was sorry to see David and Kim get traded to Tampa this past season.  Bummer. 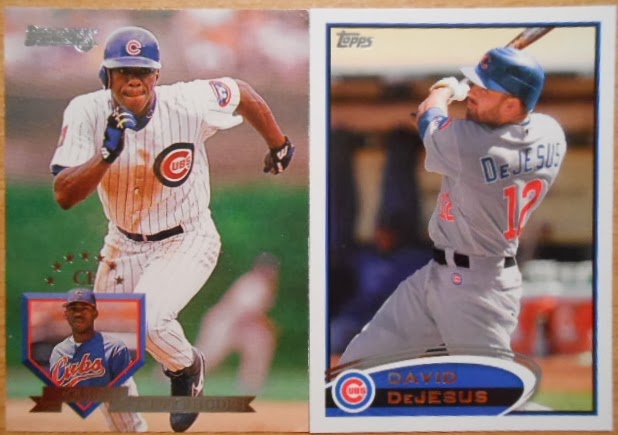 Faux vintage and real vintage.  The Bill Buckner on the left is 1982 Topps wannabe from the 2012 Archives release, and the Mike Tyson is a legit 1981 Topps card. A couple of things to note here:
1. Buckner and Tyson each are batting with only one batting glove.  Huh.
2. I love the powder blue uniforms with the white pinstripes.
3. That Cub patch on the left sleeve needs to make a comeback.
4. Both of these men would be No-Shave-November contestants.

More vintage?  I'm not if the Hippo Vaughn card counts.  It is from the Conlon Collection and was produced in 1993, but it features Hippo's 1918 season.  Hmmm.... 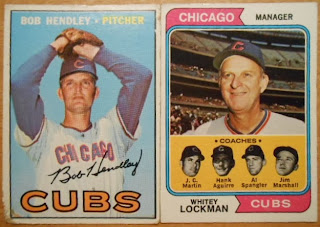 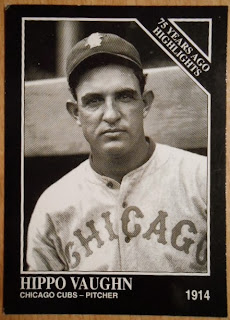 The Bob Hendley card is from 1967 and seems to have been used as a teething device for a toddler (see bottom left corner).  Is it strange that I'll probably put this card into a top loader despite the condition?  I don't have many cards from the '60s.  The 1974 manager card is a new one to me as well.  I like the manager cards, and I like that this one features coaches!  It would be great to see if you could fit five signatures on the face of one card!  I think Topps should bring this back!

Oooooooh!  A 2005 Upper Deck jersey card of Mark Prior.  Man, when healthy, Prior was the goods. 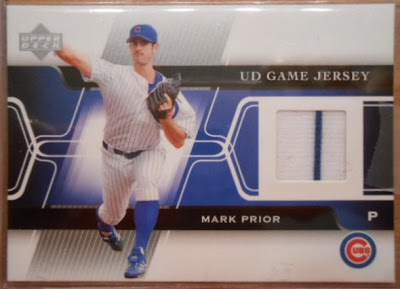 Here's the other card that AJ sent which arrived in a top loader.  It's a 1996 Pinnacle insert card.  The holographic home plate actually photographed really well.  I'm not a huge fan of Sammy, but that's a pretty sweet looking card.  I guess I missed out on a bunch of really well done inserts while I was out of the hobby in the late 90s. 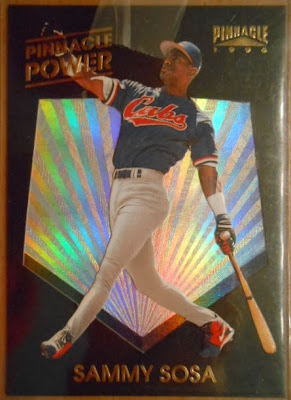 Yes, that is scotch tape at the top of the hard protective sleeve.  AJ ran out of blue painter's tape, but he apologized on a post-it, so it's all good.  I'm a big advocate for the blue stuff! 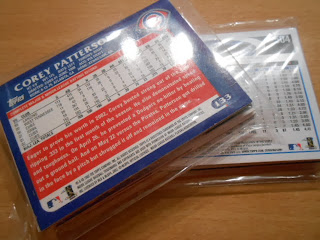 More?  Sure, there's more: two team bags worth, but you've seen the best, and I fear that if I show any more Cubs I'll lose the majority of my followers.  Haha.

Thanks for a great trade, AJ!  I'm on a bit of a pack breaking hiatus, but I'll start piling up Yankees again for you next spring!