I never took the time to enter Thorzul's Nightmares on Cardboard Contest in the past.  But, I decided with the break between my coaching duties, fall middle school softball season and winter high school girls basketball, that it would be a good way to make use of time. 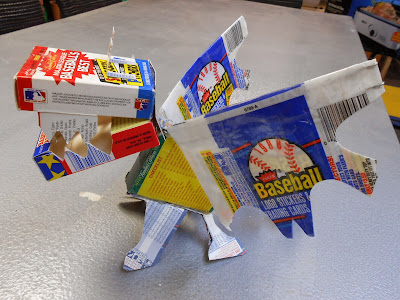 This year's contest was titled, "Fear the Fleer."  To my surprise, I had very little Fleer product in my collection.  I made off for my LCS and purchased some '88 wax packs, found my wife's glue gun, and got to work.  Just check out those wax pack wrappers!  They make great wings!

Yep, I created the first, to my knowledge, Cardosaurus in history.  Pretty epic!  I have to give Thorzul credit for the species name.  I was trying to make a dragon, but dragons aren't far removed from the prehistoric beasts.  So, Cardosaurus it is.

Here's a close up of Juan smiling for the camera. 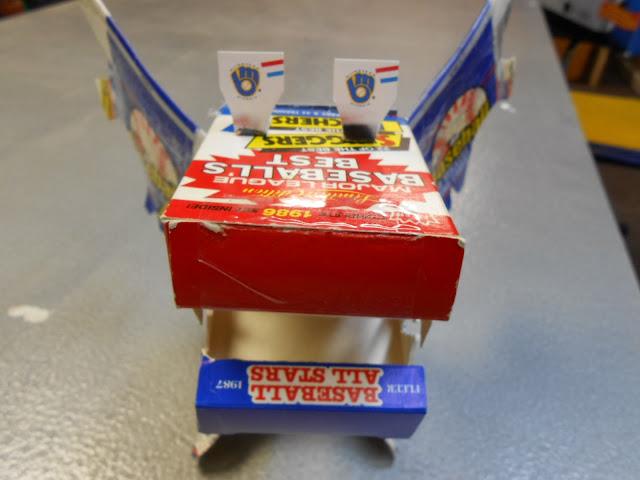 Notice his eyes are Milwaukee Brewers logos from '88 Fleer cards.  Hey, you have to play to your judge!

In all, Juan was created from six baseball cards, four wax pack wrappers, quite a few team logo stickers, and three mini boxes of those limited edition all-star sets that Fleer made so many of in 1980s.   All of it was Fleer products.  Well, except for the hot glue and some wire to create a spine and the structure of Juan's wings.

Why did I name him Juan?  Well, I needed something to cover up his vertebrae.  You know, where everything connected: head, body, wings.  So I found another Brewers card and cut him to fit the delicate area.  The card? #158, Juan Castillo.  You can see about two-thirds of the card in the picture below. 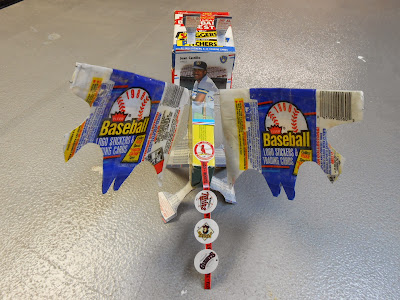 What's Juan up to now?  Well, he's protecting my man room, of course! 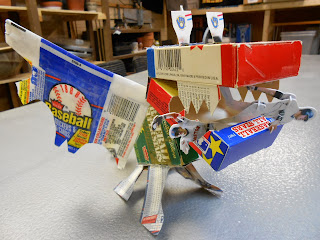 Above is a picture of Nomar Garciaparra and Jason Giambi being chomped on by Juan.  Juan's favorite treats are players of American League East powerhouse franchises (Garciaparra of the Red Sox) and noted steroid users (Giambi). I try to keep him well fed.

Here's one last snapshot of Jaun flying around my man room.  He looks right at home! 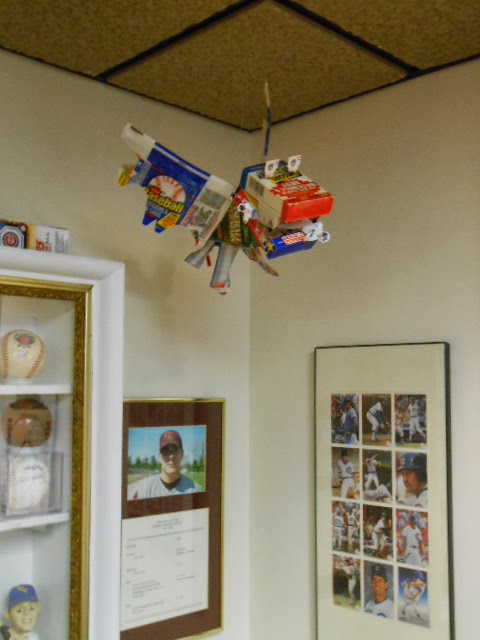 Sometimes I need a fun creative outlet, and Thorzul's Nightmare on Cardboard VI Contest certainly provided that!  I was even awarded runner-up!  How cool is that?