A Prospecting We Shall Go

I love my Cubs prospects.  Recently I've even added a new binder to my collection that features cards of the Chicago Cubs future.  I have a few odd balls, some minor league cards from stadium giveaways, Bowman cards, and a few from Topps Pro Debut and Heritage.

If  you have cards of Arismendy Alcantara, Albert Almora, Javier Baez, Paul Blackburn, C.J. Edwards, Pierce Johnson, Dillon Maples, Jorge Soler, Duane Underwood, or Dan Vogelbach cluttering up your desk then just give me a shout!  I would be more than happy to complete a trade for your unwanted Cubs prospects.

Today marks the release of Bowman's Draft Picks and Prospects set.  Many of the above names will be found in the set and a new one!  Time to add another page to the binder! 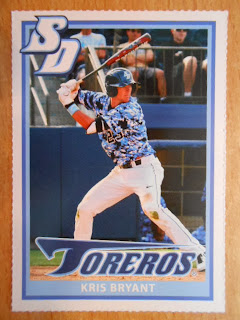 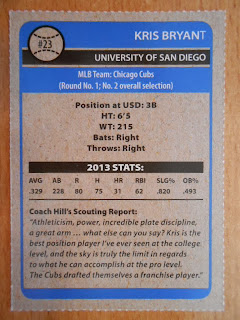 Kris Bryant was Cubs' #1 draft pick out of San Diego this past June and he has made quite a splash during his first professional season. I'm not sure of the origins of this card, but the perforation marks make me think it was a giveaway of some sort.  Pretty neat!

Bryant started with the Boise Hawks in July and then was soon promoted to Daytona of the Florida State League to help the D-Cubs win a championship. 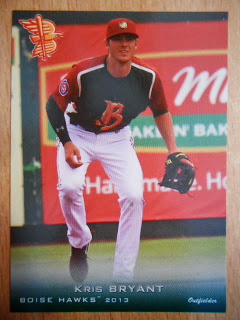 A couple of weekends ago he started at third base and batted third in the All-Star game in the Arizona Fall League.  My fingers are crossed that this won't be his only appearance on an All-Star game roster! 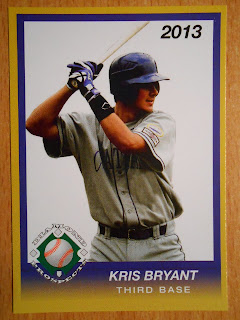 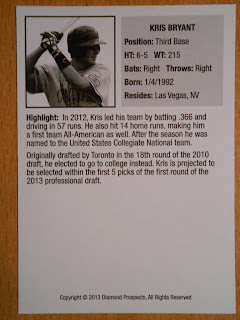 Of the cards above I pick one up from Listia and two from Ebay.  Is it too much to hope that fellow prospectors will trade me their 2013 Bowman Kris Bryant cards?  Only time will tell!