I believe I have mentioned before that my friend, Jeff, is a Chicago Cubs seasons ticket holder.  Unfortunately, Jeff has since relocated to Texas and it's less than convenient for him to make it to random season ticket holder events sponsored by the Chicago Cubs.

He dropped me a line a couple of weeks ago and mentioned that he had three passes to the On Deck event at the Bank of America Theatre that he was looking to pass on.  Nice!  Jim, my sister, and I swooped in and took advantage of Jeff's generosity and took a day trip to Chiacago. 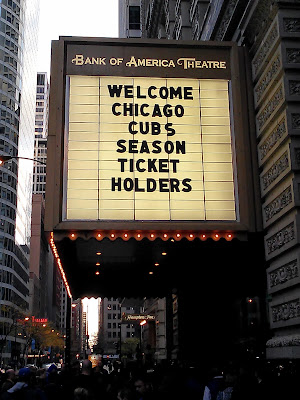 Downtown Chicago can be a little intimidating if you're not a frequent visitor of the city.  Luckily, we serendipitously ran into some signage (above) that helped us out. 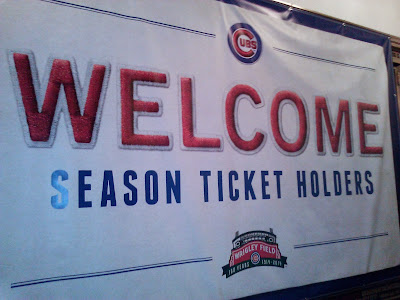 Once inside we found that the ornate theater, which is the oldest in Chicago, was decorated in my favorite colors!   Did we feel guilty that we were attending this event and we weren't truly season ticket holders?  Heck no.

We found our way upstairs and piled into the front row of the mezzanine level.  It had a great view! 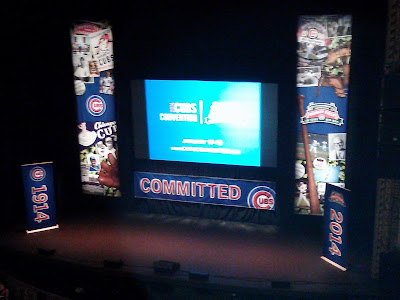 Next we made our way to the concession stand and exchanged our vouchers for a beverage and sugar.  Score! 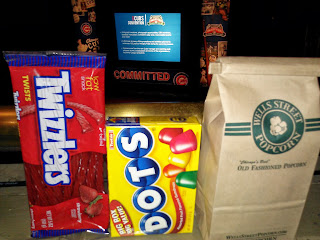 My two companions scoffed at my selection of candy, the Dots, but I didn't mind.  The green ones are totally worth chewing through a bunch of pink, orange, red, and yellow to get to. 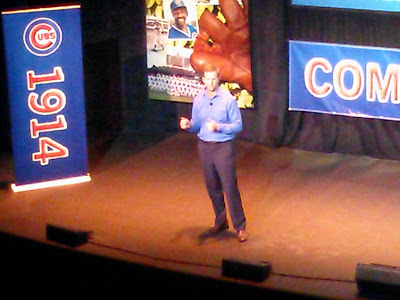 Crane Kenney, President of Business Operations, was the first to speak.  My opinion of Mr. Kenney before the event wasn't very high, because I thought he meddled too much on the "player side" of things before the Ricketts family stepped in and bought the team.  Perhaps tying some of the free agent signings to Mr. Kenney was the media looking for a guy to vilify in the papers.  Conversely, I found him to be very pleasant overall and he seems to cherish working with Theo Epstein.  Additionally, he's a fantastic orator and he appears to be genuinely invested in the Cubs and bringing a winner to Chicago.

Mr. Kenney introduced us to video footage of the new spring training complex in Mesa, Arizona, the new player development facility in the Dominican Republic, and new artist renderings of the modernized Wrigley Field.  The franchise is certainly moving in the correct direction. 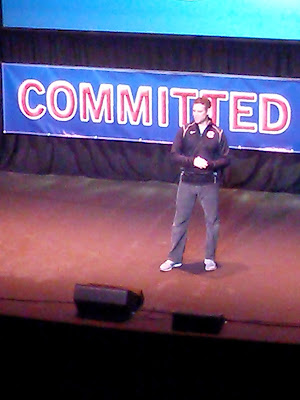 Oh, and my thoughts about Wrigley?  There was a period where I would have been okay with the Cubs moving out of Wrigleyville and breaking new ground.  But now, after seeing the pictures?  They have to stay.  It is GORGEOUS, and the new additions around the ballpark will help the community.

Theo spoke next and he talked specifically about rebuilding the franchise from the minor leagues up.  He apologized for the losing seasons, but added that the front office was going to stay the course and continue to build assets through the amateur draft, trades, and international signings.  He empathized with the fans when he said, "I don't get up in the morning and say, 'I'm going to be patient today.'"  He knows the season ticket holders and the fan base, as a whole, want a winner and we're tired of a less than stellar product on the field.

Theo said he knows that it's tough when your favorite player is traded for a bunch of minor league players, but then he threw some data at us: he has traded eight veteran players with a combined four years of control left with an average age of 32.5 and has converted that into 14 players averaging 23 years old with 78 combined years of control. (hat tip to Cubs Den for the numbers)

Oh, and the 14 players mentioned above aren't a bunch of nobodies either.  One was just voted minor league pitcher of the year!

Theo then turned to the large projector screen like Mr. Kenney before him did, but this time we were introduced to the likes of Kris Bryant, Albert Almora, Jorge Soler, CJ Edwards, and Javier Baez.  I don't know how you can be a Cubs fan and not be familiar with the five players above.  They're certainly more exciting and offer more promise than we have seen in recent memory. 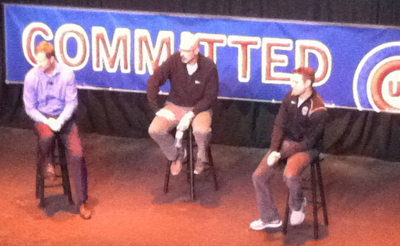 Lastly, Jim Deshaies, the color commentator for the television broadcasts, brought Mr. Kenney back out to join Theo and they took about six or seven questions from the audience.  The questions were good and insightful.  Mr. Kenney and Theo didn't dodge the queries and they didn't pull any punches.  All too often athletes speak in cliches and I appreciated that they answered them honestly and directly. 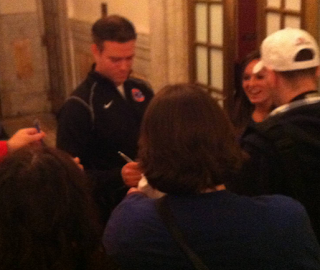 Afterwards we headed down to main lobby and my sister was lucky enough to score Theo's autograph on one of the free season ticket holder hats the Cubs were giving away.  Jeff should be happy when he receives my package!

Here's a couple of cool things we learned at the two hour long event:
1. Every seat in Wrigley, even the bleachers, will be replaced as part of the renovation.  Man, I would love to add a couple seats or a section of the bleachers to my classroom at school or my man room.
2. The Cubs will celebrate the 100th anniversary of Wrigley Field in style this year.
A. Each Friday home game will feature a promotional bobblehead giveaway of a famous Cub from each of the ten decades.
B. Each Sunday home game there will be 5,000 "toys of decade" given away to the children as they walk through the gates. Perhaps an Etch-a-Sketch or a Rubix Cube?
3. A new seating patio will be built on the back side of the upper deck of Wrigley Field, which will offer more concession stands and restrooms.  As someone who sits in the upper deck from time-to-time I must say I'm pretty happy to learn of these plans!
4.  Rick Renteria was a good hire.  He's a people person, knows how to communicate, and is HIGH energy.  My type of guy!
The day was a great respite from what has already started to become the baseball-less doldrums of winter.  We even hit a Chicagoland pizza place on our way home: Papa's Pizza. 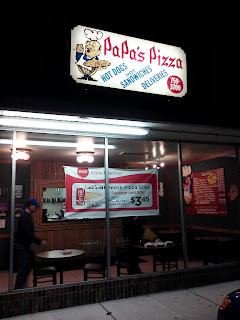