The Lost Under Shoes Package

A quick and simple post tonight, but don't let that be a reflection of it's impact on this blogger.


There were five cards in my "Top 5 Most Wanted Cards" in the side bar, and I had a feeling one of them might fall when I read this post from Judson.

This post should have went up yesterday, but wife got the mail and buried the package from Judson underneath her new shoes. Yes, my wife has a little bit of a shoe "thing" right now... no joke. I may need to find a ten step program for her if it gets any worse. It wasn't really affecting me, so I haven't said much, but the delaying of awesome cards is not cool. 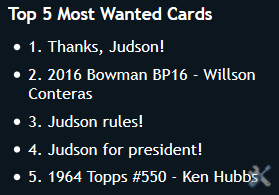 Speaking of awesome, the above screenshot shows how my "Top 5" list has been altered since the arrival of what I'm now calling the "Lost Under Shoes Package". 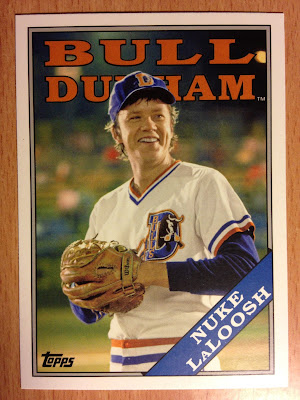 Bull Durham is definitely one of my favorite movies of all-time. Nuke LaLoosh is the lovable pitcher with the million dollar arm and a ten cent head. Just a classic character from a really well written script and Nuke's part was superbly acted out by Tim Robbins.
Extra Bonus: 1988 Topps are the first cards I owned as a collector, so this design really hits home with me. 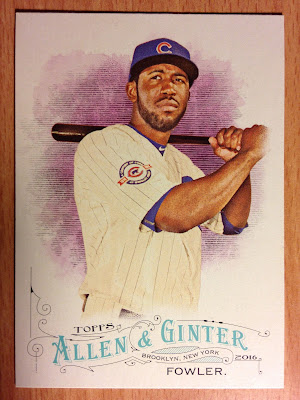 I am a closet member of Fowler's Howlers, which is Dexter Fowler's fan club. He's a genuinely good person, fun-loving, talented, plays a good center field, and does a wonderful job as the lead-off hitter for my favorite team. I was ECSTATIC when the rumors he had signed with Baltimore turned out to be false and he returned to Chicago. I'm hoping he signs for a couple more years and the Cubs tap the breaks on Albert Almora. Oh, but back to the card . . . artsy, love the purple background, and a strong pose. I don't have many cards of Fowler in a Cubs uniform (maybe thirteen now), but this one tops the list. 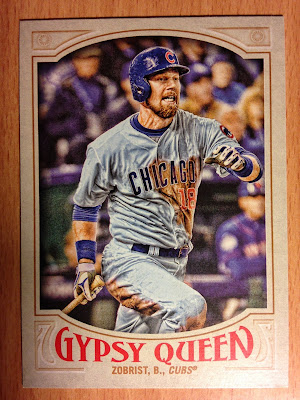 This picture of this card seems a little dark, and maybe it's photo-shopped, but it's a modest GQ design of a guy who just gets it. He's a true family man, has his priorities in line, and he loves the game of baseball. It doesn't hurt that he is a local product and I've met him a couple of times. Ben was just getting hot when the regular season ended and I'm hoping he carries that into the postseason. This card was at the top of my want list for a couple of months and I could have picked it up from my LCS for a buck, but that didn't feel right. 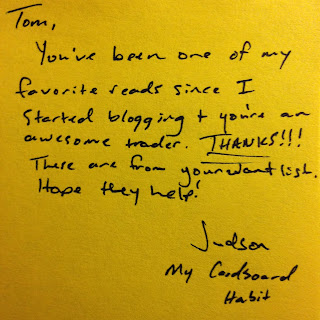 Words. Man, do I love me some words.  Yes, I'm a numbers guy, but words like these refuel my blogging battery and put a little extra zip in my step.

Judson, thanks for the terrific trifecta of cardboard. Packages like this really make my day. :)