the old garvey cey russell lopes blog in its heyday would churn out more than a post a day, and I don't think you'll find one capital letter in all of those posts. jim's blog was one of the first baseball card blogs I found back in the day, and to honor it you won't find any uppercase letters here either.

jim has since moved on to other blogging projects such as frankendodger, which ran its course back in august, and cards as i see them, which seems to be jim's new posting ground. even if new posts aren't going up jim still keeps things pretty up-to-date on the gcrl blog, as evident by his trade tracker: 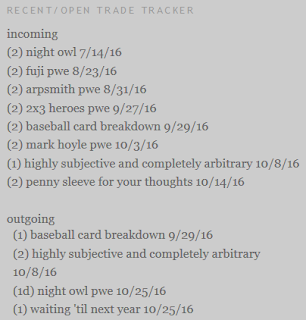 see? there i am at the bottom! actually, i had to edit his list of outgoing packages because it was way to long for a single screen capture to take in at once.

i believe, if i'm not mistaken, that i sent jim a few cards during this month's great cardboard purge. if not, jim, please let me know! regardless, here's a note and some cards he sent my way via a stuffed pwe: 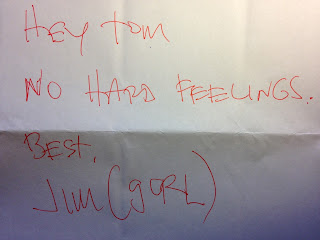 my cubs knocked his dodgers out of the playoffs and he seems cool with it. i'm writing this post sunday morning and the cubs are still alive, but if they fall to the indians i'll be much of the same mind. twenty-nine teams are going to fall short of their goal this year and i feel it's silly to harbor ill will against the one that comes home with the prize. the cubs are built for the long haul and if they don't do it this year, they'll have another crack at it.

oddly enough, here's a card that seems a little confused about whether it's a cubs card or a dodgers card. 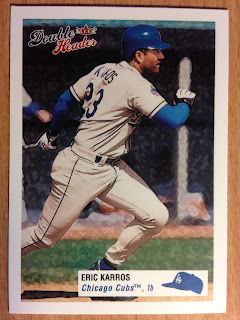 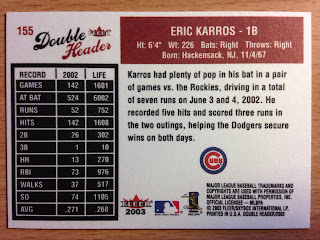 luckily the dodgers' grays aren't much different than the cubs' road uniforms. for the purposes of my collection i'm calling it a cubs card! 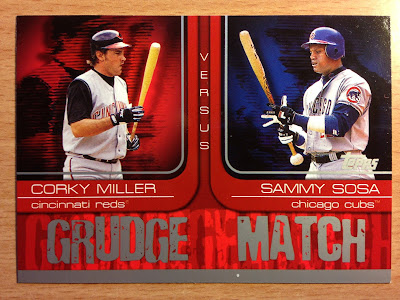 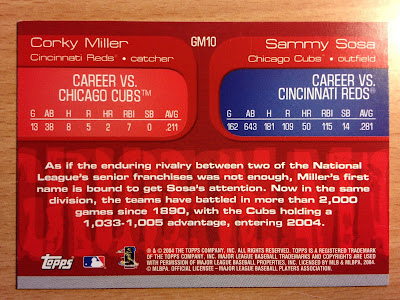 i don't know that corky miller and sammy sosa have ever had a beef with one another, but i do know sammy was caught using a corked bat in june of 2003. well, there you go, that was good enough for topps.

hall of famers always make for an excellent pwe inclusion! 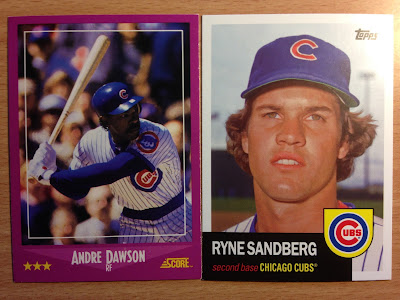 the 1988 score template is one of my favorites to use when i made cards for my high school baseball team last spring through the rookies app. 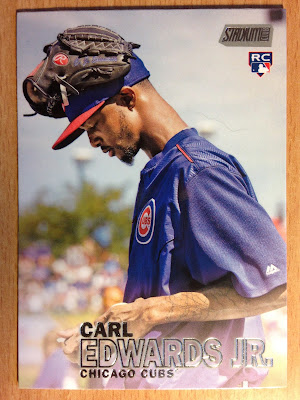 carl edwards, jr., seems like a fun guy. i have high hopes for him filling the 7th or 8th inning bullpen role next year for the cubs. here's more evidence of carl being a fun guy: 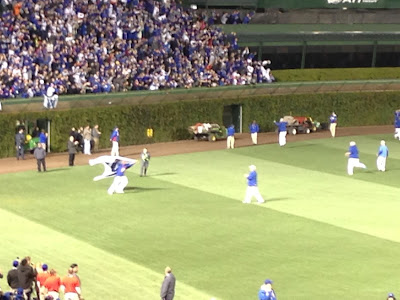 this photo was taken from my seat at wrigley during the on-field celebration after the cubs clinched the pennant. it's really hard to tell, but that's carl running around the outfield using the "w flag" as a cape!  here's a better one i swiped from the daily herald: 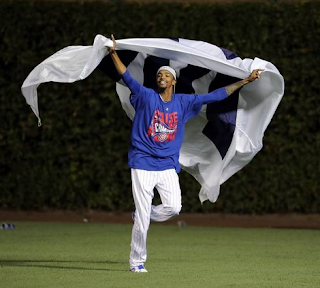 lastly, jim included some conlon cards for my set build.
unfortunately, these are all duplicates, but that's on me because i think it was difficult to distinguish between my wants and my needs. i've corrected this issue and now i am only listing the needs in the google docs file.