A couple of posts ago I broke down a package from I Love the Smell of Cardboard in the Morning, but I didn't really understand how awesome it was until I was listening to the Cubs lose on the radio last night. Yes, I do a lot of my card sorting and collating during baseball games. The Cubs' radio guys do a fantastic job and it allows me to effectively multitask with cardboard.

So I was checking the cards from Tim against my Cubs FrankenSet and that requires me to turn over each card and look at the number for each. (For the record, Tim added a few to the ol' FrankenSet.) 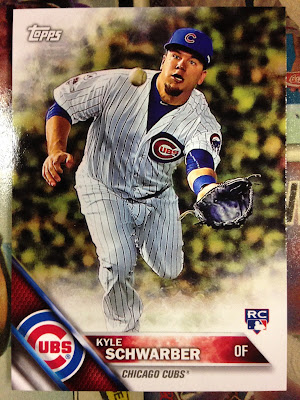 At first glance I thought this was just the regular edition of Kyle Schwarber's 2016 Topps card. I didn't buy any flagship and I'm still working on my team sets, so I didn't know any better.

Here's a picture of his regular base card:

As it turns out I have the Topps Series 1 card, but it didn't register until just now.

Here's the back on the card Tim sent me: 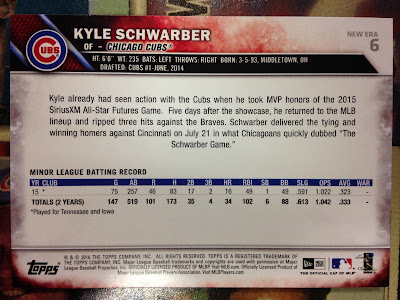 I never thought I would be able to score this card when the promotion was first unveiled, because prices were pretty high on Ebay. But now this one has fallen into my lap, even if unnoticed at first, and it was such a pleasant surprise!