A couple of months ago I put together an order through sportlots.com to knock out the remaining cards from the 1999 Upper Deck Century Legends set. If I recall correctly I was missing about a dozen cards and after the order I was still missing one, because the seller mistakenly pulled the wrong Chipper Jones card for me. Bummer. 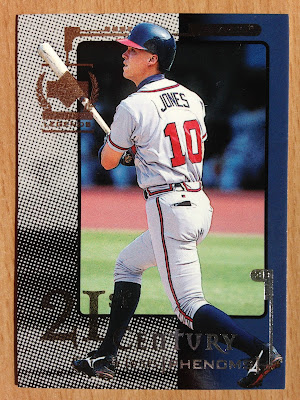 This card has been sitting in a want list all by its lonesome since that time until yesterday. Mark, from My Best Friend collects Chipper Jones, sent me a power packed PWE. I'm not sure if this is a duplicate from Mark's best friend, as his blog name would suggest, or maybe it's from Mark's collection. Regardless, it completes the set for me and I'm feeling a great sense of accomplishment this morning because of it, even if it wasn't of my own doing.

The second card in the PWE was a 1959 Topps card, which are pretty scarce in my collection. 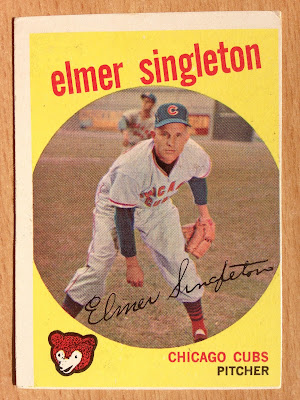 According to the back of the card, Elmer Singleton sported a 0.00 ERA in 1958. I will add that if he hadn't been injured he would have lead the NL in ERA. (Sorry, Joe Buck's man crush of Clayton Kershaw during the NLDS is still firmly rooted in my mind.) 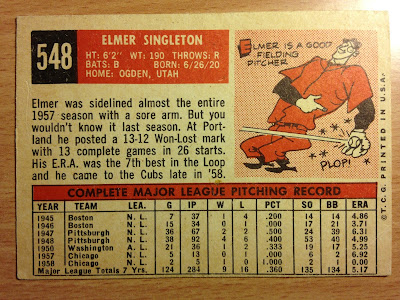 The importance of this card is in its number, #548, which fills a hole in my Cubs FrankenSet. Only four vacancies remain and once those are filled I'll only be looking to update the cards in the folder. The MIA cards are #627, #651, #653 and #661.

Thanks for the PWE, Mark!  I've prepared a few cards for you and they'll go out tomorrow!