Woof and a Brew

The VOGELMONSTER made his MLB Debut on September 12th so I treated myself to a bit of a shopping spree.

Of the cards I purchased this was the big one: 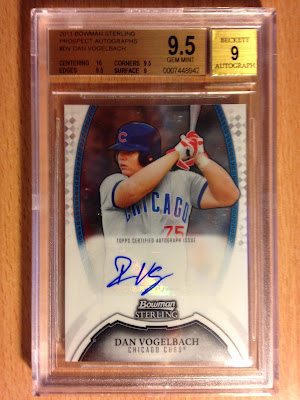 Woof.  It's a graded and autographed Bowman Sterling card of the VOGELMONSTER!

"Woof." I think that's what TLC and ZZ would say in such a scenario. Not bad for $7.50 shipped. I'll take that everyday and twice on Sundays.

On to the brew.

I wanted to pick up a six pack to bring to my friend's house for Monday Night Football. Oh, and if you haven't heard . . . the Bears are NOT good. (I'm predicting a top 5 draft pick.)

Anyways. I was looking for O'Fallon Wheach, because a good fruit wheat beer is hard to find in these parts. But, right next to the Wheach in the cooler was this: 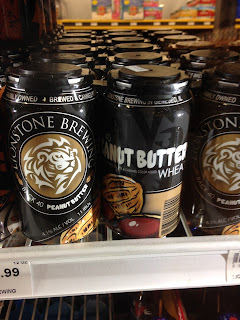 Lionstone Peanut Butter Back 40 Wheat Ale. For the record, I love anything peanut butter. We usually run out of spoons in the flatware drawer first because I can't help but take a spoonful of peanut butter when I pass through the kitchen. I think I need a 10-step program. It's that bad.

The beer?  Nope. I tried one, was able to get it down and I left the rest of the six pack in my friend's refrigerator. It was very peanut buttery. Supposedly, it should be paired with doughnut holes or fruit pizza. My friend said I should pour it over a slice of break and make a PB&J sandwich. I'll try anything once, but I won't be trying this beer a second time.

That's it from Central Illinois where everyone is thinking baseball. It's a fun time of year.