But the entire state of Illinois didn't have one to offer. Usually I can bank on the suburbs to host at least one show, but the closest to me this weekend is in Urbandale, Iowa. I've been to that show once before, but at the time I was able to pair it with an Iowa Cubs game. The nearly 8 hour round trip drive seemed worth it to me because minor league baseball is awesome.

I simply can't justify it today. Thankfully, I've been saving a yellow padded mailer from Judson just for this occasion. Judson held a man room/card cave contest on his blog, My Cardboard Habit, and I came away with first place! 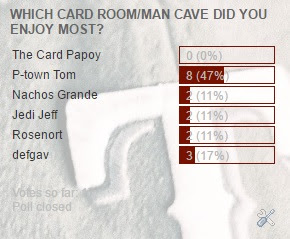 Prize packages are cool! (Especially when you were hoping to hit a card show and drop some coin on some Cubs cards.) 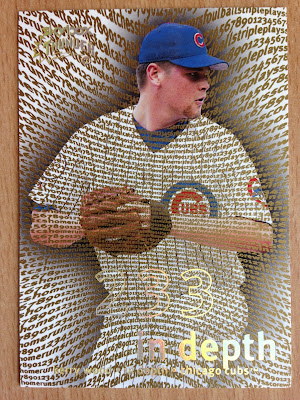 Boom!  Right out of the gate we have new card to add to a player collection. This one is a little trippy, but as a math/numbers guy I can get behind it. This is the 476th different Kerry Wood card to add to my collection.

Jake Arrieta picthed yesterday and was cruising along at about eleven pitches per inning through the first five frames. Three outs later we was over one hundred pitches. Yes, the Brewers were patient and lit him up during the sixth inning. Frustrating. 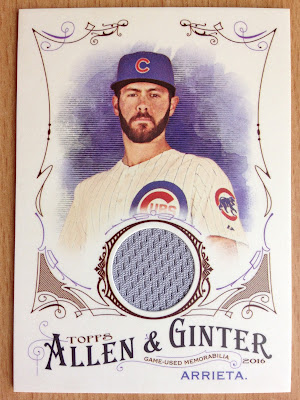 The Cubs are going to need Jake to find his command if they hope to make a deep run into the play-offs. 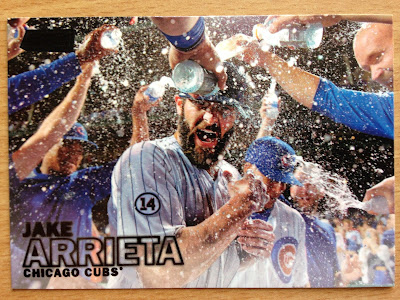 Hopefully he'll be able to harness the movement of his pitches and we'll see more celebrations like this one during the next six weeks. Love me some Stadium Club! Oh, and I should mention this is a black parallel. (My wife thinks it is no different from the base except that it had an unfortunate run-in with a black permanent marker.)

I've never been a John Lackey fan. He has a nice track record in the play-offs, but his personality comes off as a bit abrasive at times.  Maybe it's his constant "cowboy up" mentality. 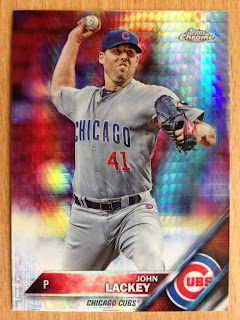 Regardless of my feelings towards Lackey, I've been on the search for one of these prizm refractors from Topps Chrome since the product hit store shelves last month. If I was able to go to a card show today I definitely would have picked up one of these beauties. 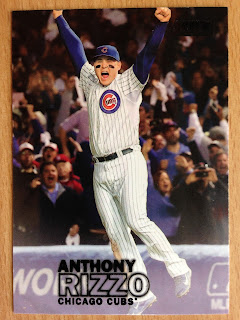 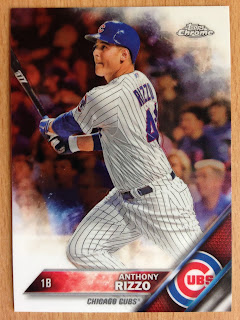 Speaking of beauties . . . Stadium Club and Topps Chrome are two of my favorites this year. Stadium Club is known for its gorgeous photography and they delivered again this year. I'm not a big fan of the flagship design, but I really like it in Chrome. The smoke in the corners really looks cool with the chromey finish. 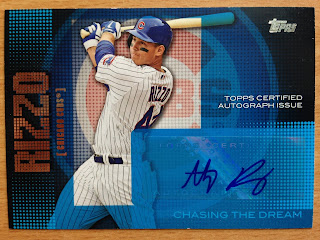 This is only my second auto of Anthony Rizzo. The other one I own is from 2009 TriStar Obak and Rizzo was wearing a Greenville Drive uniform on the card. I busted a few boxes of the product back in '09 and at the time was I disappointed with the Rizzo pull, because he was Single-A player for the Red Sox.  Oh, how things have changed! Wow, Judson.  You have outdone yourself! 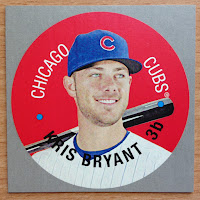 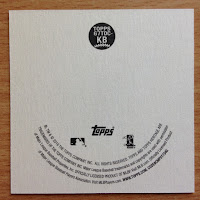 Card shows are always a great place to pick up cards that were never on one's radar, much like this 2016 insert of Kris Bryant. I'm assuming this one is from Archives or Heritage.  Yes?

I just picked up the Kyle Schwarber Perspectives card yesterday and now . . . 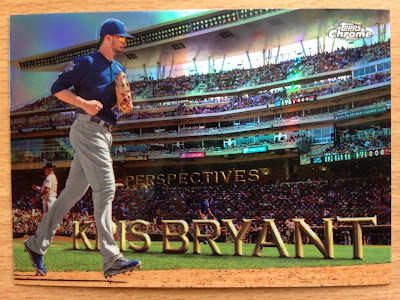 Perspectives is my favorite insert set this year and they look so sweet on chrome stock. Beautiful.

Judson, my goodness!  What a package and just the pick-me-up I was looking for after I couldn't find a card show within driving distance.  Thanks!  Good luck to your Rangers in the play-offs this year!
Posted by P-town Tom at 9/18/2016 11:24:00 AM