So I walk down the stairs of my in-law's house, in the south suburbs of Chicago, and my mom-in-law hands me a sheet of uncut baseball baseball cards from this morning's paper. I was still wiping the sleep out of my eyes, but once my eyes focused I was quite alarmed. 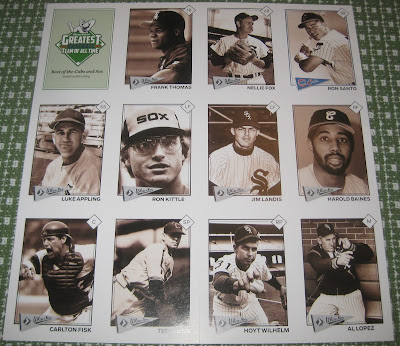 One Cub?  Seriously?
Ron Santo is the lone representative from the north side. Honestly, I'm a little surprised Robin Ventura didn't make it. Perhaps it has something to do with Ronnie playing his last games for the White Sox. 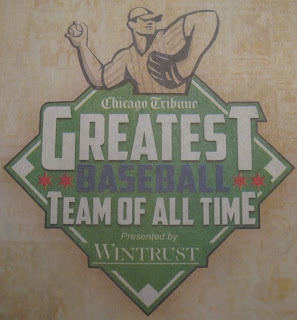 The Chicago Tribune's Greatest Baseball Team of all Time was voted on by the Tribune's readership. For those who live in our "great" state I know I don't need to rehash Illinois' voting and political history. Some things don't change I guess.

Here's the one selection I really can't argue with at all:
Yeah, the Big Hurt makes Frank Chance and Mark Grace look like amateurs.

But, somehow the voters left off the likes of Ryne Sandberg and Ernie Banks (among others) from the team. Nellie Fox and Luke Appling were great ballplayers and I can see them garnering some votes over the aforementioned duo. But still, it raises a few eyebrows.

But, in my mind the most glaring omission was Billy Williams. Ron Kittle in left field over Billy Williams?  Wow. Kittle's career WAR was 4.7 and Billy Williams had a WAR of that amount or higher in six separate individual seasons!  How in the world could Kittle get voted in over Williams?  Again . . . vote early and vote often.

I shouldn't complain. I stopped reading the Chicago Tribune when they started charging for their on-line content and by the looks of the roster I'm thinking many Cubs fans did the same. It is what it is, but the lopsided results of the composition of the team are a little astounding!

I'm sure JediJeff will have something to add to the discussion and I'm hoping Wrigley Wax creates a digital custom card of Billy Williams to correct this glaring omission.

Edit: RIP Jose Fernandez. He seemed like a fellow who was just coming into his own as a leader and was also on the cusp of becoming one of the elite pitching talents in MLB.
Posted by P-town Tom at 9/25/2016 08:52:00 AM