Tony,the proprietor of Off Hiatus Baseball Cards, has asked the members of the blogosphere to show off their favorite baseball card show find. I have frequented quite a few shows since I started this blog back in 2011, but my favorite is from a show in the early 1990s.

I was probably thirteen at the time and my dad would take my sister and I around to local card shows. I would spend what money I had on expanding my Ryne Sandberg player collection or on finding the last cards to complete my '90 Score set or my '91 Upper Deck set. Packs usually ran fifty cents to a dollar, dime boxes were the norm, and sometimes dealers would throw in extra cards during a purchase.  It was a good time to be young collector!

At most of the local shows there was a dealer who would have the dice game available to play. You are all probably familiar with the game: six dice, cards numbered from six to thirty-six, and each roll of the dice was a buck. Usually there was a pack of 1990 Topps around number eighteen or nineteen. Perhaps an '88 Topps Traded Mark Grace around numbers twelve or thirty. The tough rolls, six and thirty-six, might hold an '89 Upper Deck Griffey, an entire wax box of cards, or some cool vintage.

Cool vintage . . .  I only ever had enough money to buy wax packs and Sandberg singles when I was younger. The oldest cards I ever purchased were from 1983, because I was never patient enough to save my money to buy anything older than Ryne Sandberg's rookie cards.

Usually when I was down to my last dollar I would purchase a roll to end the card show on a bang. In this scenario it was quite a bang!  I don't remember if I rolled six 1's or six 6's, but I walked away with the oldest card in my collection: a 1966 Roberto Clemente. 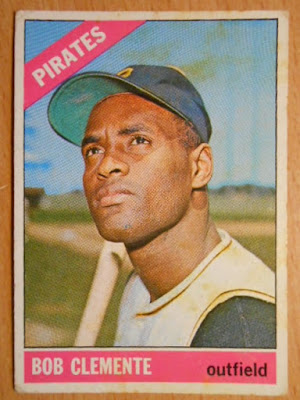 Yes, it's slightly loved.  But isn't that the best kind of vintage? 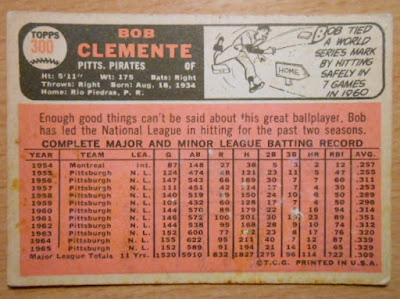 Clemente was one heck of a ballplayer and an even better human being.  I've always been a fan and this card has been in my collection for nearly twenty-five years and that is where it will continue to stay.

I'm not sure if this qualifies as a "find" as it's more of a win, but it's my favorite card I've walked away with from a card show.