I was browsing Ebay yesterday evening looking for any good deals on the remaining cards I need for my 2015 Bowman Chrome Dan Vogelbach rainbow.  I have yet to see the red version or the superfractor show up yet, which makes me sad, but at least my wallet is happy for the time being.
Yet, I did see something new: 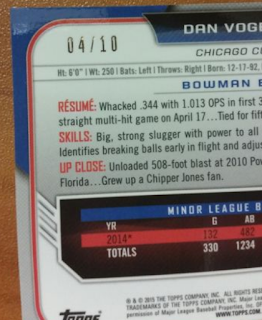 I guess the answer to that question is since they started giving cards away on Twitter. The card community has officially dubbed these Twitter Blue refractors.


Obviously, some Ebay sellers don't know much about economics. (Or maybe they know too much about baseball card economics?) To the price gorging seller I say, "Your mother was a hamster and your father smelled of elderberries!"
Yes, I went there.
End Mini Math Rant.

The Bowman Twitter account has been giving these new blue refractors out to its followers the past couple of weeks. I figure all ten Vogelmonsters will will be given away at some point and I plan on trying to win one of these packs of Twitter Blue Parallels. Each pack of cards comes with nine blue refractors and one autograph. If I manage to win one, then I can probably turn a couple of the ten cards into a Vogelmonster and set the rest free amongst the blogosphere!