Past Me was pretty smart. 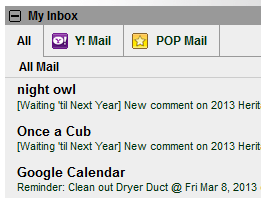 So, this message from my "Google Calendar" was waiting for me in my e-mail this afternoon.  I ignored it, started a load of laundry, and told myself that I'll check the dryer duct later this weekend.

Past Me was trying to do Present Me a favor by setting up a reminder through e-mail to get my chores done in a timely matter.  I should have listened.

When I went to check on the clothes in the dryer they were warm, yet damp.  Shoot.  What's wrong now?

Weird.  The reminder shows up in my e-mail box and we're having dryer trouble?  Very weird.


We've been this house for nearly five years now, and I've never done anything more than check the duct work around the machine itself.

The problem was not there.  It was in this longer pipe that was tucked away in the drop ceiling of the basement.   No, it's never easy is it?

Air flow was coming from the left and dryer lint was catching in the seam where it fit into the other pipe.

I was able to turn a piece of the pipe 180 degrees so that the dryer lint won't pile up in a seam and eventually clog again.
Hopefully Future Me will heed Past Me's e-mail warning next time.