I went to my local card shop yesterday and I hoping  to pick up a pack or two of some new product.  I've already taken a pass on Topps flagship, but was thinking that Heritage might suit my collecting interests.

Bummer, a day early!  So I splurged on a shiny Anthony Rizzo and headed happily home.

I returned to my LCS today and bought just a pack of Heritage.  I never really purchase more of a product unless I've decided to collect the set.  So, one pack was it and I was really to perform a taste test of sorts.  I've always liked the 1964 Topps design, so expectations were high!

Here's the first card that was staring back at me: 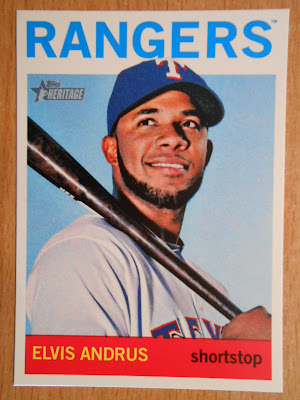 It's a nice shot of Mr. Andrus.  He's been my fantasy baseball team's shortstop the last three years. In my eyes, a good way to start a pack. 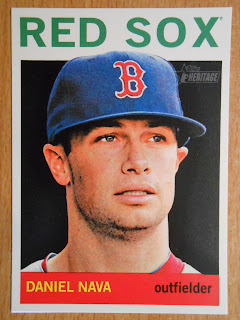 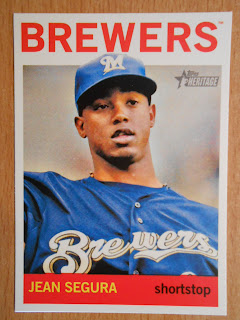 Daniel Nava and Jean Segura?  Huh.  Heritage is a 500 card set.  That's roughly 16 or 17 cards for each team on average.  So, I guess finding a couple of names that I'm not really familiar with shouldn't be too shocking. 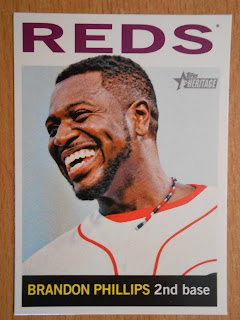 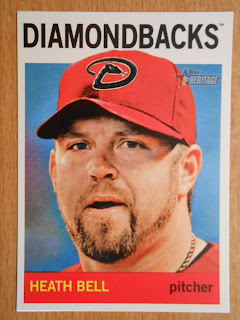 There we go!  Much better, a couple of guys that have played in the Mid-Summer Classic.
Side note: The "REDS" is purple.  Wouldn't it make more sense for it to be, um, I don't know, red?  Come to think of it, "Red Sox" on Nava's card is green.  Weird.  Is there rhyme of reason to the color schemes?  Was it this mind boggling back in 1964? 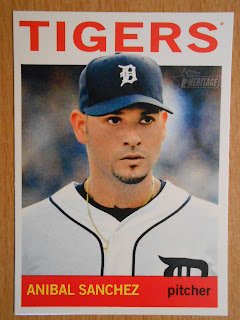 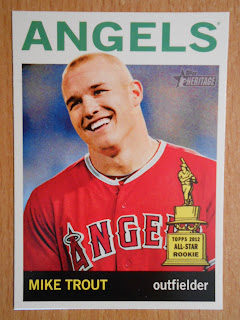 A guy who almost signed with the Cubs, but still no Cubs.  Bummer.  The next card is of some guy that must be good or something, because he has a rather large trophy on his card.  Turns out the Trout is a short print, which are planted in one of every three packs.  Win for me!

Here's how the pack finished off: 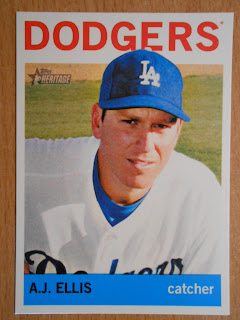 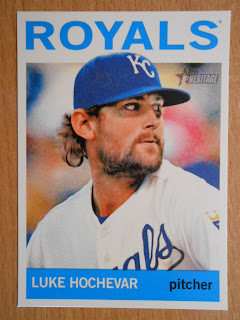 Huh, players from two teams with similar team colors.  Yet, Ellis' name is in black while the position's text is white, and Hochevar's is just the opposite.  I think I'm becoming more OCD as I age.  Why do things like this bother me?

Final Verdict:  Nope, this will be last pack of 2013 Heritage I'll buy.

I'm really happy with the Trout, but the I just can't get over the color schemes.  I've done a little research, and all the Dodgers cards back in 1964 were the same color scheme: Dodgers in red, player name in black, and position in white.  (FYI: The Royals weren't around in '64.)

For the record, Pete Rose's card from '64 also features "Reds" in purple, just like my Brandon Phillips.

Okay.  So Topps didn't really change the model.  Good for them for sticking to what apparently works.  I still don't like it and I can't sink a wad of cash into something that's going to drive me crazy.