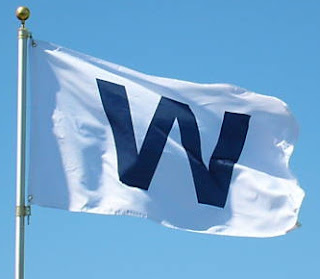 I have a "W" flag hanging on one of the walls of my classroom.  Some kids get it, but there have been more than a few in recent years that have no idea what it stands for or why it's there.  It's always fun seeing a student's expression once I finish explaining how the Cubs raise the "W" flag after a win so the passengers on the 'L' can see if the Cubs Won or loss as they zoom by Wrigley on the public transit system back in the 1940's.

Today the "W" will not be raised and instead the Cubs' front office has decided to wave the ol' white flag.  You know the one... the one that means they're giving up on the 2012 season.

Well, in all seriousness, I never expected the Cubs to compete this season.  And really, who actually did?  In my pre-season prediction post, I had them slotted to finish only ahead of the Astros this year in the NL Central.

If Theo and Jed, the baseball minds that be at Wrigley, have a 3 to 5 year plan for bringing the Cubs back to the post season, then I just hope they don't trade away integral pieces that could be difference makers within that time.  Starlin Castro would be one individual that I would hesitate to offer up.  No ballplayer is perfect, but Castro is still improving and I think he's a piece that anyone could build around.  Depending on the return I could see (and wouldn't mind seeing) Garza, Dempster, Marmol, Soto, and Soriano all switching uniforms before the season is over. Obviously, I'd like to see a nice return on Garza and I'm hoping they wouldn't have to eat all of Soriano's contract.  It'll be interesting to see what shakes out.