Cat on a Leash - FAIL

So it's another beautiful mid-western morning and Laura's in the yard planting flowers and I'm cleaning up around the house.  Gus, naturally, is pacing like a lion near in kitchen trying to make his get away to the great outdoors.  He and Mooshie had already managed to sneak outside earlier in the morning.  We keep explaining to them, "You're inside cats!"  Apparently there is some sort of communication barrier or something?

Laura suggested that we tether Gus down outside.  I was okay with that and after a few minor scrapes I was able to secure the harness on Gus.

So we tried the back patio first.  Victory!  He was finally quiet and decided to settle down a bit.  Before long Gus wanted some shade and made his way over to the patio table and chairs.  Unfortunately, he found out rather quickly that it is far too simple to become entangled amongst the legs of the furniture. 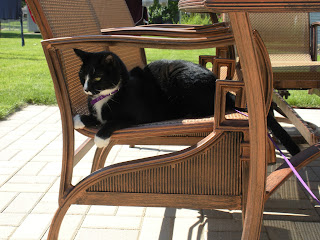 Okay, next location.  The driveway seemed like a nice place.  Sun, shade, and no grass for him to trouble his bowels with.  You would think that a brick wouldn't be enough to deter a cat from relocating oneself.  Well, it was...  at least for a while! 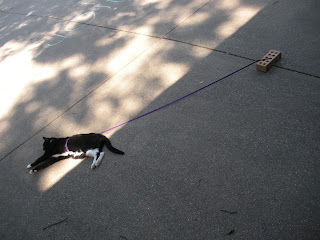 Laura and I were in the backyard and Gus was in the front.  No biggie. He was tethered down.  Mmmmmeeeeooooow!  What?  He's in the backyard now?  From what we can figure he didn't like the neighbor's leaf blower any more than he likes the vacuum cleaner.  Poof!  He becomes Houdini!

For the record, the brick is NOT heavy enough to keep him in one place.  He must have scampered through the garage, dragging the brick, until the brick became lodged.  Gus then somehow finagled his way out of the harness and escaped the horrors of what would be the leaf blower. 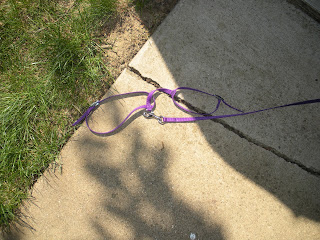