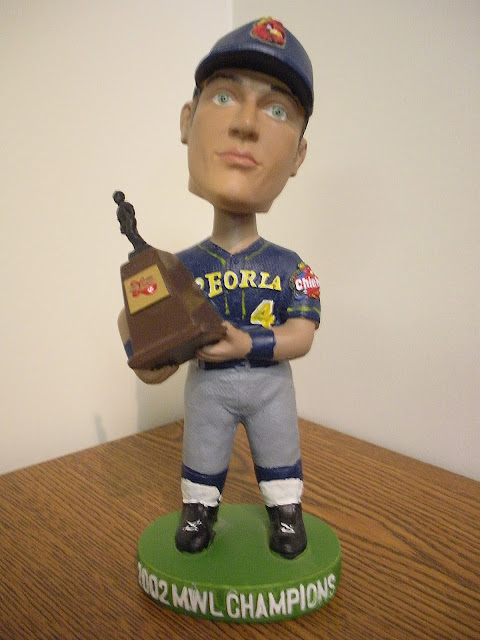 Bobblehead #19
Name: Shaun Boyd
Position: Second base
Team: Peoria Chiefs
Description: 7 inches; holding 2002 Midwest League Championship Trophy.
Relevance:  My sister worked as an intern for the Peoria Chiefs in 2002.  How do I say this without incriminating myself or those that I love?  Hmmm.  Let’s just say that I went to more than my fair share of games that year.
How Acquired: Giveaway promotion through the Peoria Chiefs in 2003.
Other Notes: The Chiefs are celebrating the 10 year anniversaries for both the opening of the “new” ballpark and the 2002 MWL Championship.  I remember the 2002 really well and it is probably my 2nd favorite team to come through Peoria. The team featured seven future major league ball players including All-Stars Dan Haren and Yadier Molina.  The only downside to that season was that the Chiefs were an affiliate of the St. Louis Cardinals and I didn’t like the thought of cheering for future Cardinals.  Bleck.
For the record, Boyd played nine seasons of minor league ball, but he was never called up to the majors.  He was the team MVP that season, thus the reason for why he was chosen for the bobblehead over Haren or Molina.
Posted by P-town Tom at 5/28/2012 08:00:00 AM