So Kyle at Just a Bit Outside, a baseball card blog for those not in the know, was selling off part of collection, by team, at the low price of two cents per card.  The deal was I had to send him payment that covered the shipping and handling plus two cents for every card that I felt was worthy of my collection.  Well, as it stands right now, my collection is all over the Man Room floor.

They were all Cubs, so they were all worthy.  Well, maybe not the Milton Bradley card, but that's a post for another day.

Here's eight of my favorite from the 189 that arrived in the mail yesterday. 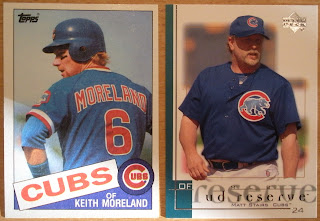 Keith Moreland in uniform for the 1984 playoff bound Cubs.  I wasn't sure about Keith as a radio broadcaster at first, but he and Pat have become a solid broadcast duo.   Matt Stairs is one of the legitimately good guys in baseball.  Love the facial hair by the way. 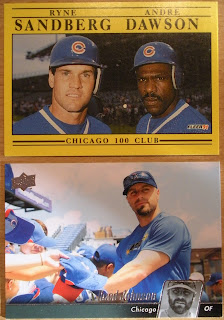 Sandberg and Dawson on the same card.  Really?  Doesn't get much better than that.  Reed Johnson is one of my favorites in baseball.  He trains hard, takes as many reps as possible, and ALWAYS hustles.  Sure, he's on he wrong side of 30, but he's a gamer and grinder.  I hate it when he grows that thing off of his chin, but the beard here is a much better look. 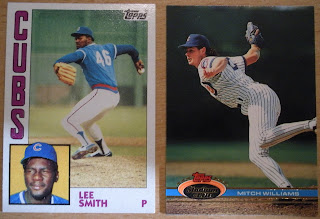 Closers.  Nice.  Lee Smith is a big man, and I once saw him in person hold a baseball in his hand.  Except it didn't look like a baseball.  It looked like my hand holding the cue ball from the billiard table.  Big Man.  Mitch Williams gets some love because he does a decent job on the MLB Network and because he was my mom's favorite from the '89 playoff team.  He was truly "Wild Thing." 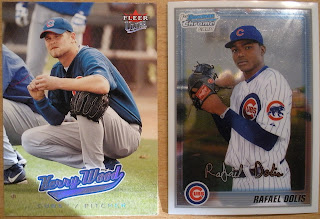 Four closers and no Carlos Marmol, you ask? Yes, Marmol was in the lot, but there's no love for him here.  As you may have sensed in past posts, I'm not a fan of players earning eight-figure salaries and under performing. Sorry Carlos, but it had to be said.