Two days ago I placed down a few early bids on some silent auction items at the annual P-town card show. I wasn't very hopeful of winning anything, but I received a phone call yesterday informing me that I won an item. 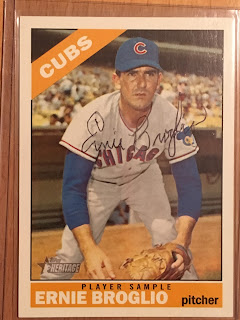 I was hoping for the Bruce Sutter autograph, but a certified Ernie Broglio auto isn't bad for five bucks!  For those who don't know, Ernie Broglio was the main piece coming back to the Cubs from the Cardinals for Lou Brock. Yes, that Lou Brock.

Once I got the card home I noticed the auto was in ballpoint pen and the words "Player Sample" were above Ernie's name.  So I did a quick Ebay search and swiped this photo: 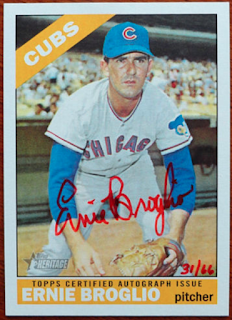 Huh, red ink, numbered, and "Topps Certified Autograph Issue" is written above the name. From what I can tell, the backs are identical, including the bit about "The signing of all autographs is witnessed by a Topps representative to guarantee authenticity."
So, what do you all make of this variation?

Yesterday morning I was gifted my first Cody Bellinger card from a co-worker. 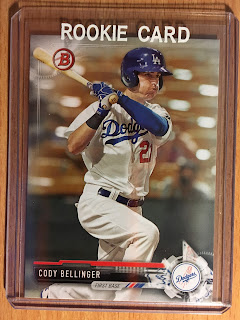 He likes to the support the local park district too, so he attended the show later in the afternoon. From what my co-worker said, he purchased this from the dame dealer who sold me my Sandberg autograph. I guess the wound up talking about me somehow. Funny how the world works sometimes. Anyways, we coach together and talk baseball from time-to-time. He's a swell guy and it was a really nice thing of him to do.

Lastly, my wife was attending a conference for work last week in Texas. While game seven was being played in Los Angeles my wife was in downtown Houston.  Here's the view from her hotel room the morning after the Astros won the World Series. 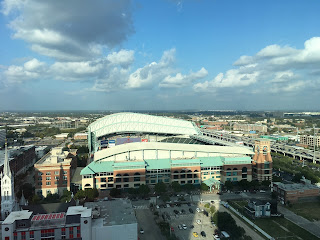 Before her conference kicked off she walked to the ballpark and stood in line for a half-hour to enter the team store. 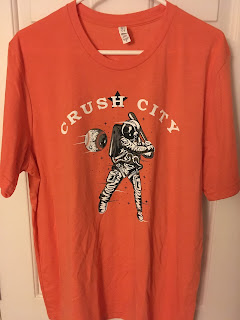 World Series gear was flying off the shelves, so she picked me up this super soft Crush City t-shirt. Orange is one of my favorite colors and I really dig the astronaut on the shirt. The baseball is very much like the moon, but with baseball seams or stitches. Oddly enough I keep thinking it looks like an eyeball. LOL

Moon or eyeball, I will proudly wear this t-shirt around next spring once it warms up!  Yes, I am a Cubs fan, but I'm also a baseball fan. I've owned Rockies and Rays shirts in the past and eventually had to throw them out because they got too thin. I currently have a Pirates shirt in the rotation to go along with my new Astros shirt.