P-town only has one card show a year and today was the day. The show serves as a fundraiser for the local park district, so before I made way around to the vendors I penciled in some bids on three of the silent auctions. Being one of the first through the doors, per usual, I was the initial bid on all the bid sheets. I think I've one once in the last five years.  But again, it's all for a good cause, so I'll give myself a pat on the back for driving up the item price if I come up empty one more time. It'll probably surprise no one that I only bid on autographed items by Cubs legends. Hey, at least you know what you're getting when you visit this little corner of the blogosphere. 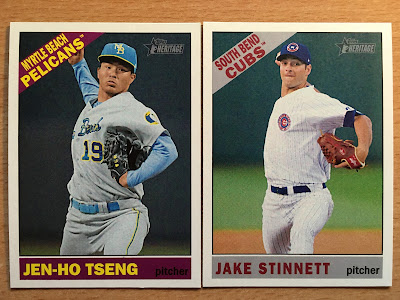 Who's getting ready for IP autos at the Cubs Convention in January? THIS GUY!  Above are couple of pitching prospect for the Cubs from 2013 Heritage Minors. The Tseng may be a little dark for an auto, but the Stinnett card will work just fine. These were both dime box finds! 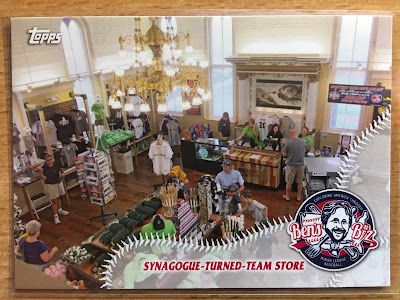 I didn't buy any 2017 Topps Pro Debut, and if I did I probably would have tracked down this insert earlier in the summer. 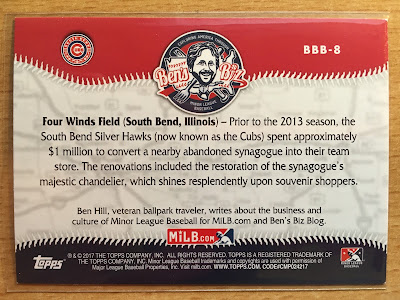 I visited Four Winds Field during last summer and was really impressed by the team store. Now there's a card of it in my collection. Nice!

This Ryne Sandberg was part of my 2nd largest purchase of the day. The table read $1 each or 10 for $5. Challenge accepted! There were three monster boxes to flip through, I pulled up a chair, and dug in. I chatted with one of the two gentlemen at the table during my stay and eventually he said, "You've been here awhile. I can tell you like your baseball cards. You better find eleven to make the $5 worth it." Hey, don't mind if I do! 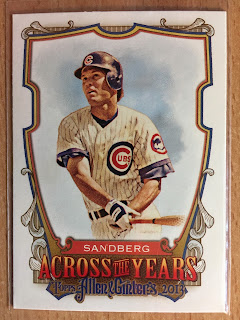 For the record, this Sandberg, although four years old, is new to my collection. I'm now at 848 849 unique Ryne Sandberg cards in my collection. 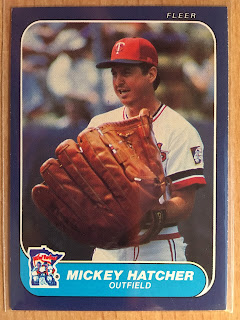 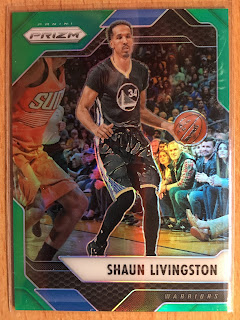 More cards from the same table... I've always wanted a copy of this Mickey Hatcher card. Oh, and the Shaun Livingston card is my first basketball purchase in I don't know how long. After winning a couple of titles with Golden State, the local sports announcers have taken to calling him "The Pride of Peoria."  I have a small collection of guys who played in Peoria... Joe Girardi, Kirby Puckett, Jim Thome and Shaun Livingston are probably the most notable names. 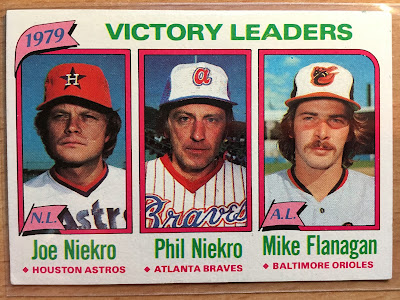 That's a whole lot of Niekro on one card!

I love U.S.A. baseball and my favorite set is the '88 Topps set. Jim Abbott was the hot card from that set back in the day. Pre-teen me always wanted this card. 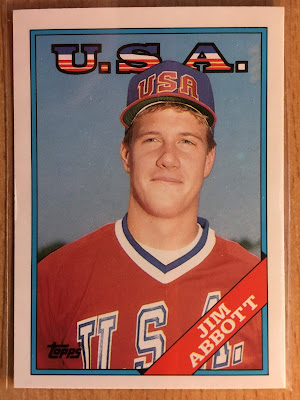 I love the backs... so much brighter in the Traded set than in the regular 792 card set. 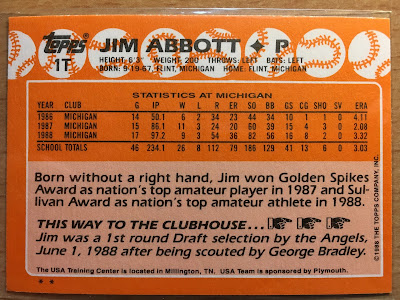 Bo knows you love this card. 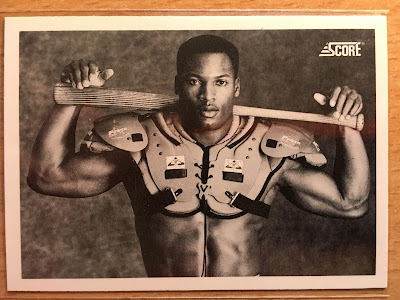 I still remember this photo being used for the front cover of a Beckett Magazine. I don't know if we'll ever see another two-sport star of his caliber again.

Has anyone figured out how the Cubs got by the Nationals and these two guys in the NLDS this year? 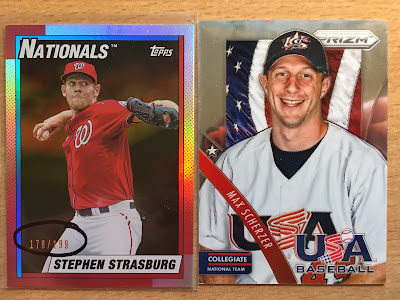 The foil board Strasburg looks really sharp in hand. Again, another USA card, but that's not the main reason I bought the Scherzer card. You can actually see the two different eye colors of Mad Max on one card. That's a win in my book! 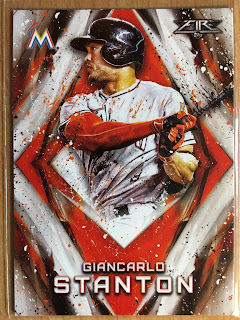 Believe it or not, I actually bought an Aaron Judge card today, but it was for another collector's Topps Fire set build. I haggled for once, which is not really in my DNA. I guess I was feeling brave because the card wasn't for me and I could walk away without feeling too much remorse. For a price which was already cheaper than what I could find on Ebay, I came out with three cards instead of just one Judge. The Giancarlo Stanton card gets me one closer to finishing my Fire set.

I've got two purchases left... which to go with?  Best deal or the BIG ONE?

Ahhh... let's go with the non-Cub related find of the day.  Here's what I would call the best deal of the day: The seller had glass cases of vintage stars and everything was 50% off. Most everything was ten bucks and up, and in many cases there were HOFers and rookie cards well over the $100 mark. What did I ask to see out of the case?

Yeah, 1979 TCMA Japanese Pro Baseball cards.  Each had a sticker price of a quarter and there where nine, all in top loaders. Oh yeah... don't forget the 50% off. I scored them all for a buck. After I thanked him for my purchase the dealer said, "I don't know how much they're really worth, but if nothing else you've got nine new top loaders." True. True. 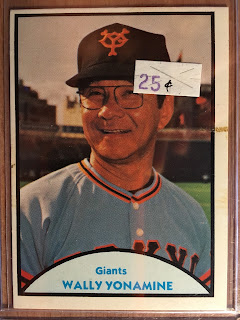 Amazingly, I recognized the top card on the stack... Wally Yonamine. I read Sadaharu Oh's biography this summer and remember Wally Yonamine as the veteran who graciously moved to outfield so Oh could play first base. The card is off center and has some surface issues (see right and left borders), but it's a pretty sweet addition for what amounts to eleven cents. Now, I need to acquire an Oh card!

Alright, my big purchase of the day. It started off with a pair of cards from 1954. The Bowman Hoyt Hilhelm is dinged up, but I love me some fuzzy corner and loved vintage. I will happily slide this into Hoyt spot in my HOF Binder. (I hope Nick approves!) 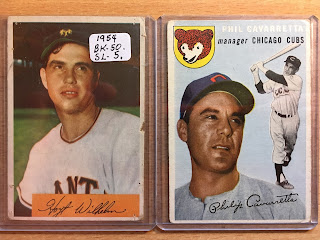 The Wilhelm and Cavarretta were both in a stack of well-loved vintage marked down 90%.

The dealer, his wife, and I talked for probably ten minutes about our Ryne Sandberg collections. There was just a fantastic display of Sandberg cards in a glass case on the table. He had the 1991 Signature Series and the 1993 Elite Dominators Sandbergs I chased as a kid. I opened so much Donruss wax hunting for those cards. The dealer also owns a copy of the Reading Phillies minor league Sandberg I constantly eye on Ebay... I had never seen one in person until today. Wow!

He was older and attempting to sell off the more expensive cards. He talked about the time and joy building his Sandberg collection brought him and his wife mentioned that he didn't really have someone to pass it down to. He asked me to make an offer on one of his Sandberg autos, because I mentioned how I didn't own a certified auto. I replied back with, "I'd rather not, because I don't want to insult you." He wouldn't have it and asked which one I was looking at. 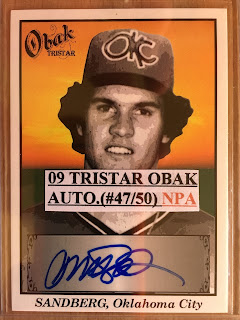 We all have our stories about how we left the hobby and then got back in. 2009 Tri-Star Obak is why I got back in. I love unique sets and Obak had it all: minor leaguers, hall of famers, record holders, baseball pioneers, and Ryne Sandberg. I built the set ... minis, variations, SPs... the whole thing... even pulled an Anthony Rizzo auto at the time, but no Sandberg auto.

I shot the kind sir my best offer. He talked with his wife... she smiled. He countered slightly higher and included the Cavarretta and Wilhelm cards in the deal. I quickly emptied my wallet, smiled, thanked them both... and completely felt like a twelve year old all over again.

I have a handful of IP (in person) Ryne Sandberg autos, and I cherish them all, but this one feels like it brings more to my collection. I don't think it's because it's a certified auto, because I don't put much weight into that kind of thing. Maybe it's because I bought multiple boxes of 2009 Obak chasing it? And now I finally have it!  You know, there is something about the chase!

My Topps Fire set still has some holes in it and I didn't find any Topps Update Cubs cards, but I think I did pretty well otherwise at the show today.  What do you think?