I've always been a fan of the cards, like Topps Gallery, that get away from the standard photo as medium. When I found a blaster at a neighboring town's Wal-Mart yesterday I had to snag one on my way to checkout.  Let's see how I did! 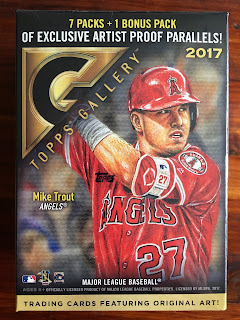 Good to see Mr. Trout, the best position player in baseball for my money, getting some love from Topps again. 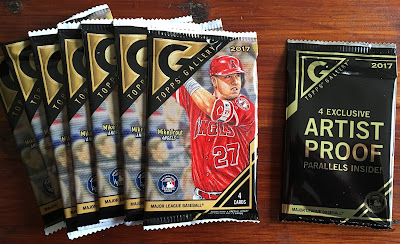 As the exterior of the blaster states, there are seven four-card packs and one exclusive artist proof  parallel pack.  Ooooh!  Fancy!

Pack #1:
The first card is a Cub!  Woo-Hoo!  The borders of these are not purely white. They are somewhat slick and have a canvas like pattern only visible when the light hits the card just right. The player portion of the card has more of a matte finish to them and are a tad smoother. 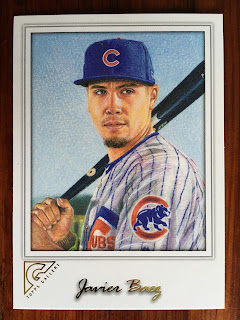 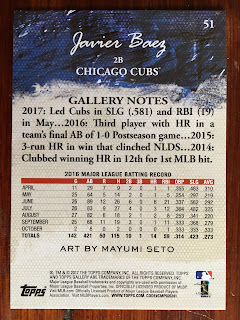 The backs are nice, but I find it intriguing Topps went with the month-by-month statistical breakdown on the back of the cards.  Different. 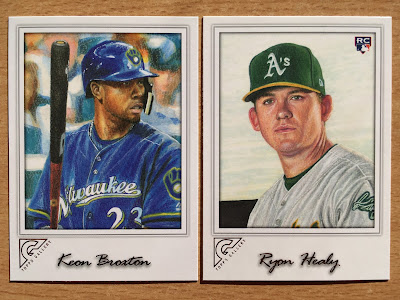 Here are cards two and four of the pack. The back of the Ryon Healy card was actually the first card I saw, which was not a good sign for this collector. Keep in mind, Seattle just acquired Ryon Healy from Oakland to play first base in 2018... the same position a certain Vogelmonster plays.  Sigh.

Hall of Fame insert cards fall at one for every four packs. I made out with two in the eight pack blaster. Fair enough. 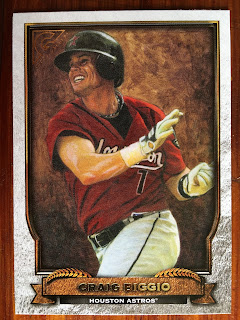 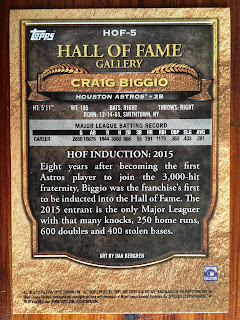 I should mention that all the base cards are the artwork of Mayumi Seto and all the inserts I pulled are the work of Dan Bergren.

This card is from pack #7.  The pack felt thicker and I was pretty psyched when opening it... but then I found it was thicker because it contained the standard four cards and a non-numbered advertisement card of the main artist. 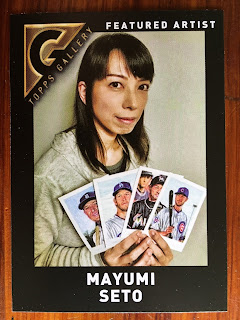 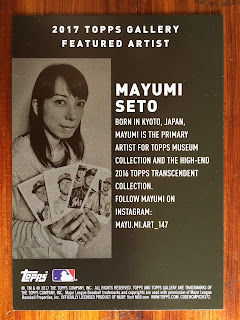 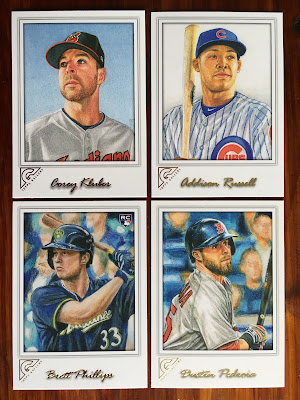 No inserts in this pack. That's the second Brewer and second Cub in two packs. 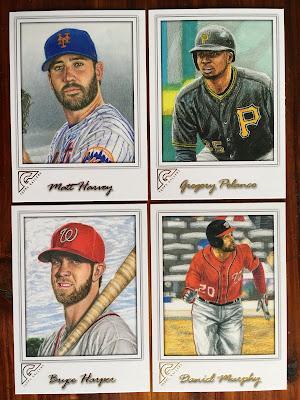 I look at the Matt Harvey card and the Daniel Murphy card and I can't help but think they were done by different artists.  Nope, same artist. Oh, and a Nationals hot pack! 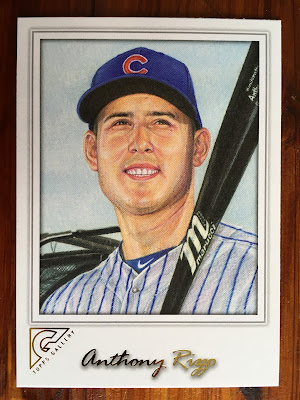 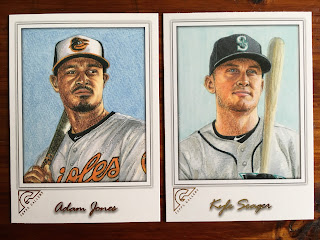 Masterpiece cards appear at a rate of one for every seven packs. Again, this blaster is delivering what it promises. 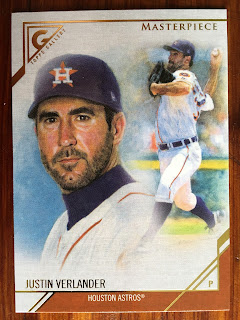 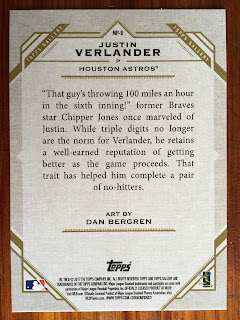 I was pleasantly shocked to see Justin Verlander in Houston Astros gear. I figure a set with artwork would take more time and he would have been painted in Tigers garb. 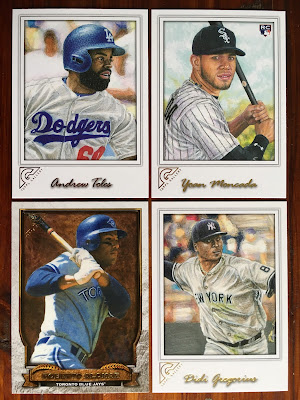 There's my second Hall of Fame card... Roberto Alomar.  That gives me a pair of second sackers for my HOF inserts.  I was hoping for Sandberg, but he wasn't granted an insert card, just a short print card. 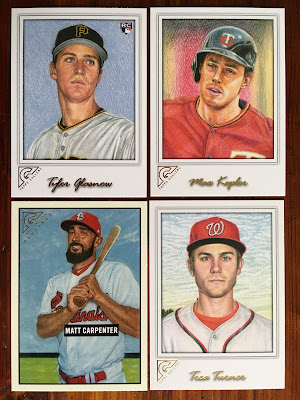 I actually like this pack quite a bit. Trea Turner, Tyler Glasnow and Max Kepler are all young players who ooze potential. Matt Carpenter?  Yeah, he's a Cardinal, but I'll find a taker. 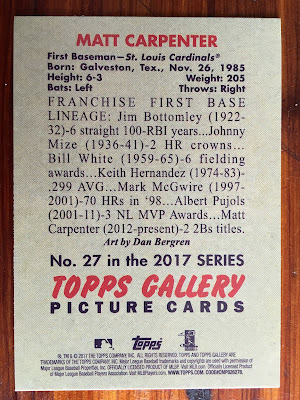 Carpenter's card is part of the 40 card Heritage checklist, which pay homage to the 1951 Bowman set. These cards fall one to every eleven packs, so I beat the odds there. 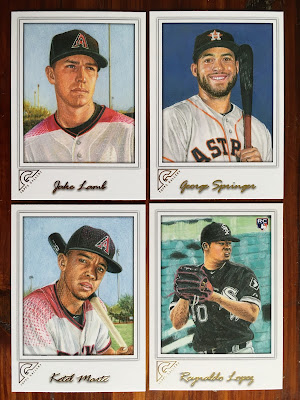 Diamondback hot pack! Georger Springer is the clear winner in this pack if you ask me. 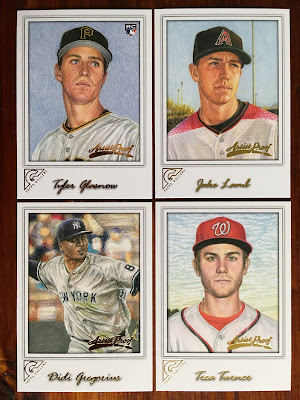 I was very disappointed with my parallel pack. First the "artist proof" parallel only received a little bit of gold foil on the card.  Secondly, these are all duplicates!  Oddly enough though, these four cards were spread out among three separate packs. Different collation on the parallel pack.

The checklist for this product is 200 cards, with cards 151-200 being short prints. I did not pull a short print.

There are four different colors for the base parallels (green, blue, orange, and red), but I didn't pull a color parallel.

There are four insert sets in this year's edition of Topps Gallery, but I failed to pull an Expressionist. That's a bit of a bummer.

Oh, and two of the main panels of the blaster box say, "Look for Rookie Autograph cards!"  Nope, that didn't happen either. That's okay, I never expect to get an auto in a blaster anyway.  For the record, there are 150 non-SP cards in the base set and there are 170 different autograph cards in this product. Yes, 170! The late 80's and early 90's are known as the junk wax era and I think we're currently living in the junk auto era. Just sayin'.

I pulled some nice cards, like Bryce Harper, three Cubs, Yoan Moncada, and couple of World Champion Astros. But overall, I felt my box was lacking.

The Cubs, Yankees and Brewers in this box are already claimed, but if you see something you'd like hit me up with a comment!