I'm going to go in chronological order from the first cards produced to the most recent. Each post will contain all of the Dan Vogelbach cards I've acquired from that set and I'll make a short mention of the ones I'm still on the look out for.

So, without further delay, let's get to the first card.

Early on, many baseball pundits were predicting Dan Vogelbach would break camp with the Mariners in April.

Topps Now, arguably the first "set" to produce 2018 cardboard, jumped at this opportunity and placed Vogelbach in its 15-card team set of the Mariners titled Road to Opening Day. 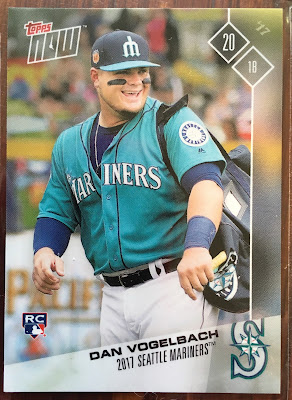 Vogelbach opened the year with the Tacoma Rainiers in Triple-A, but I did have my first Vogelbach card of 2017. I picked up a single of  the above card from Ebay, as I did many of the cards, because I didn't want 14 other Mariner cards that came in the set if bought directly from Topps.

Regardless, this is my favorite non-auto/relic of Vogelbach in my entire collection. It's a nice design, a rookie card, and the photo selection is top notch.  The man has a great smile.

It was a big year for Vogelbach... well, at least in cardboard. One set down... a dozen or so more to go!