I attended seventeen professional baseball games in 2015 after witnessing twenty-two last year and nineteen in 2013.  In terms of attendance this was a down year for me, but last year's numbers were bolstered by five spring training games in Arizona.

In all I made it two eight MLB games and nine MiLB games.  Here's the tale of the tape: 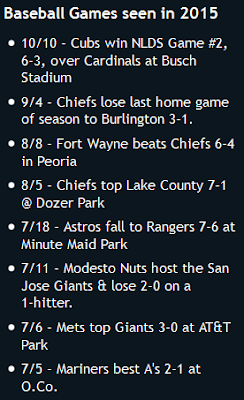 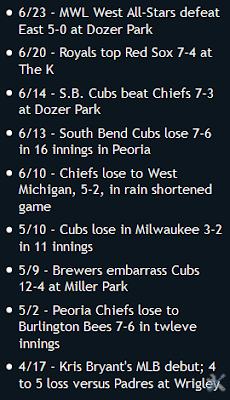 Here's a brief breakdown:
* The home teams were at a severe disadvantage if I had walked through the turnstile, because I seemed to bring the visiting club luck on eleven of the seventeen contests.  Yikes!
* I saw games in two different minor league stadiums (Peoria and Stockton, CA) and seven different major league stadiums: WrigleyField, Miller Park, Kauffman Stadium, Oakland Coliseum, AT&T Park, Minute Maid Park, and Busch Stadium.
*My minor MiLB team of the choice, the South Bend Cubs of the Midwest League, split the two games I saw.
*My local MiLB team, the Peoria Chiefs, went two and five in the seven games I attended.
*The Cubs? I saw them play live only four times.  I witnessed Kris Bryant's debut, a loss, in my only trip to Wrigley this year. I later saw the Cubs play two games in Milwaukee, which were both losses, but I did see Kris Bryant's first career home run!

The fourth game was my favorite of the whole year. I traveled with my sister and two of my good friends to St. Louis to watch the Cubs beat the Cardinals in Busch Stadium to tie up the NLDS at one game apiece. 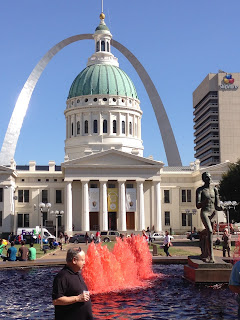 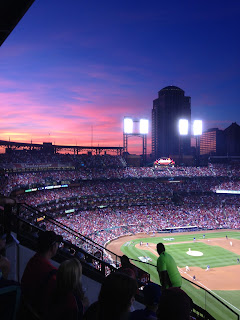 I had not been to Cubs playoff game since 2003 in Wrigley versus the Atlanta Braves. St. Louis was all decked out in red, including the city's fountains. It was a beautiful evening, and even better because the bases always seemed to be full with Cubs!

I haven't had that much fun at a ballpark in a long, long time.

I've been thinking about setting some goals for 2016 and I've decided I would like to cross off two more ballparks from my list.  I'm undecided on where I would like to go, but everything I need is on either the west or east coasts, which means it'll cost a pretty penny in travel expenses. I've toyed with the idea of flying to Atlanta, watching a game, and flying back in the same day, but only at the right price. I only need seven more ballparks until I've seen them all, so there's no rush. If things don't lineup just so, then I'll probably put my quest on hold for a summer.

I plan on attending the Cubs Convention for the first time and although it isn't a game I'm pretty excited about it. Hopefully I'll be a able to get a couple of in-person autographs (*cough*cough*David*cough*Ross*cough).

Lastly, I think it might be fun to see all of the Midwest League ballparks.  Outside of gas and maybe a couple of cheap hotel rooms it would be relatively inexpensive. It's a task I possibly manage in one summer. Plus, if I schedule it right I could follow the South Bend Cubs for a spell. Nice!