I received a package from Zippy Zappy about a week ago and at the time I debated whether or not I should rip into right then and there. I was still thinking about doing some Black Friday shopping on COMC, but I have since scratched that idea for the time being. Maybe next year?

Rather, I've saved Zippy's package for today! Going out and literally wrestling with the crowds of shoppers is overrated.  So why not some cards instead? 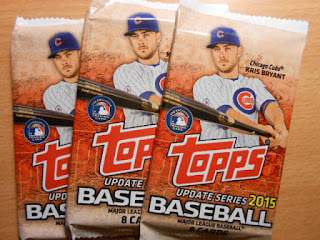 There were three cards in top loaders and three packs of 2015 Topps Update in the package, but you and I both know better!  The packs are surely Zippy Zappings!

Let's take a look at the three cards: 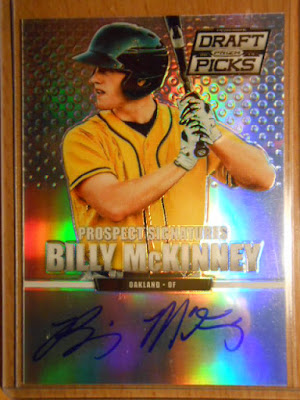 I am EXCITED about Billy McKinney. McKinney, a left handed bat, has good on-base skills,a solid stroke and he should fit well in left field in a year or so. I'm still not sure what Billy Beane was thinking when he traded the Cubs Addison Russell and Billy McKinney (plus a AAA pitcher) for two months of Jeff Samardzija and Jason Hammel. I guess if the A's would have won the World Series it would have been a different story.

Did you know that I have nearly thirty different Kris Bryant cards and of the thirty only six came into my collection WITHOUT the help of the blogosphere? 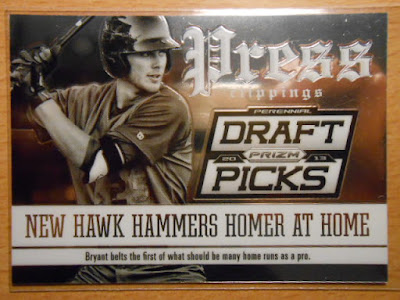 Heck, I didn't even know this existed!  What a hellacious helping of alliteration.  For the record, Bryant started his professional career with the Boise Hawks of the Northwest League. 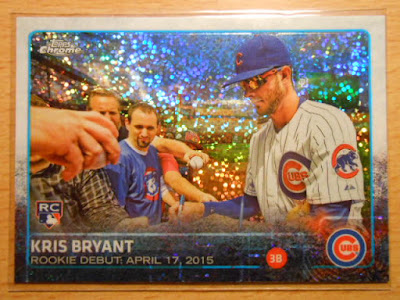 I made it! I told myself I wouldn't purchase one of those holiday boxes at the local box store and now it's safe to say that particular "need" has passed.  It's my first look at the Chrome Update cards and they are SHARP!  I love the sparkles in the background.  Excellent execution, Topps.

Zippy, I'm working on a return package for you, but I have exactly one card sitting in your stack. Be patient, my friend! In the meantime please be satisfied knowing you've made me one very happy blogger. Thank you for the cards!