The Cubs Are Driving Me Crazy

The Cubs lost another road series today AND they haven't captured their last series win in another team's ballpark since September 9th of last season.  Sigh...

I was starting to think they were showing some improvement.  Starlin Castro and Anthony Rizzo are both having bonce back seasons.  Junior Lake has been a pleasant surprise as of late.  Even the bullpen has been on a hot streak as of late.  Heck, after laying an egg in San Diego last week Edwin Jackson pitched really well today, but it was still in a losing effort.

But alas, here we are... again.  Nearly a third of the way into the season my Cubs are the only team without twenty wins, they have the worst record in baseball, and they are on pace for a record of 60 wins and 102 losses.

Oh, and Junior Lake. ... never mind.
How is the batter the last guy in the ballpark to know if the ball he batted is a homer or not?  Yikes.

I guess I can get excited for the draft next week, and while I'm at it I can look forward to next year's draft as well.  It seems as though we'll picking near the top yet again in 2015.

So, when I'm depressed about my team I go looking for something to laugh about elsewhere in MLB.  The Cubs were just playing the Giants, so I didn't have to look too far... helllllllo, Hunter Pence.

I like Hunter.  He seems like a great clubhouse guy, he's very fan friendly, and he is solid baseball player.  Yet, he's always stood out.  It's tough to put it to words, so let me just post a picture of a mock scouting report I found on Mr. Pence. 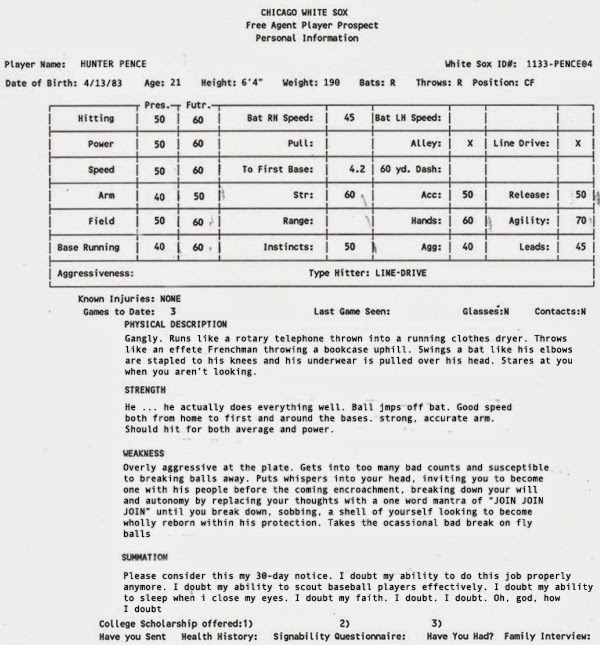 I've read this a couple of times now and it makes me laugh every time.  I hope you enjoyed it, too.