2014 Bowman came out recently and I bought one hobby pack.  You know what that means!  It's time for another round of Pack Wars! 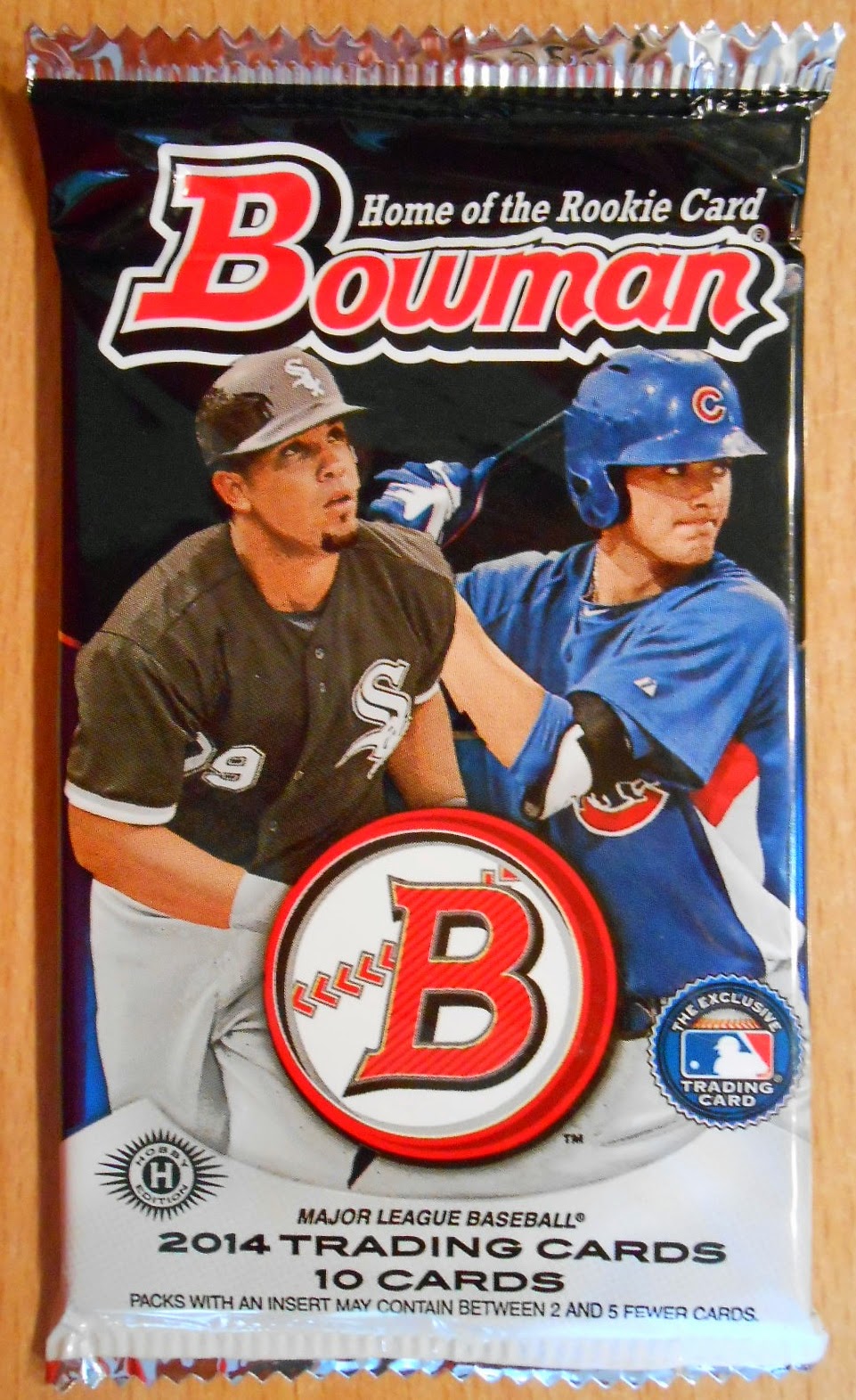 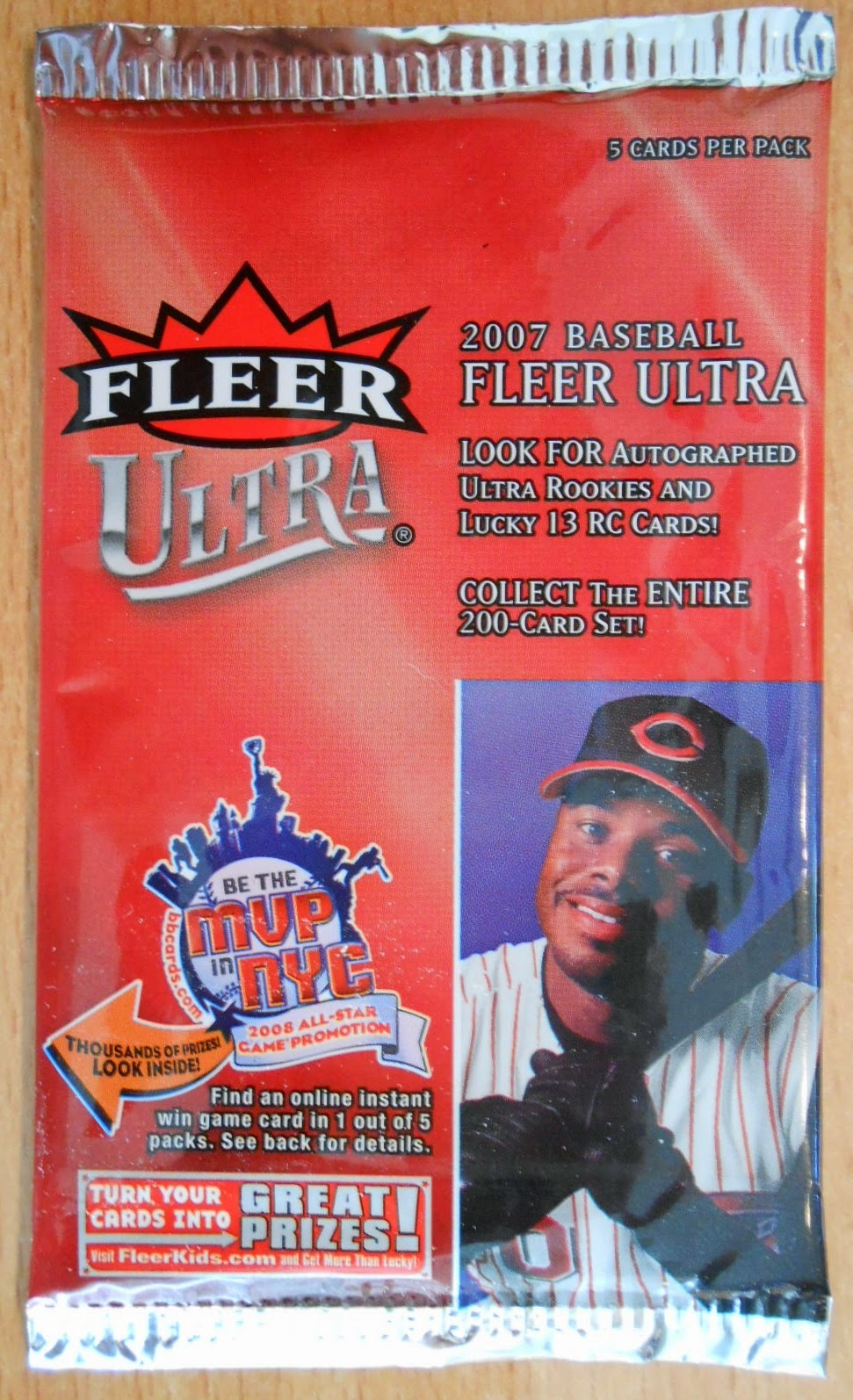 That's right, Bowman is going to have its hands full fighting off two packs of Ultra.  This should be exciting! 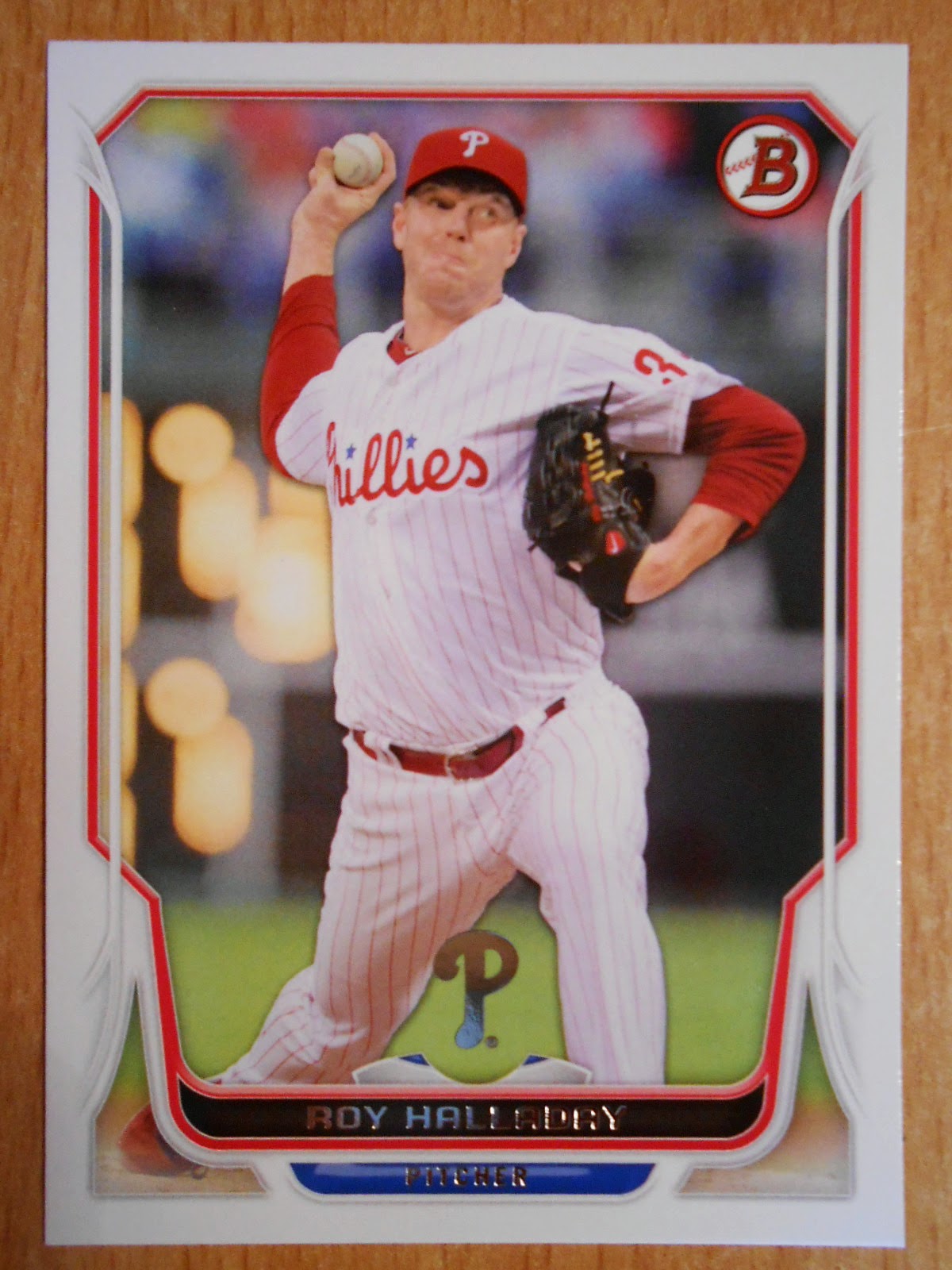 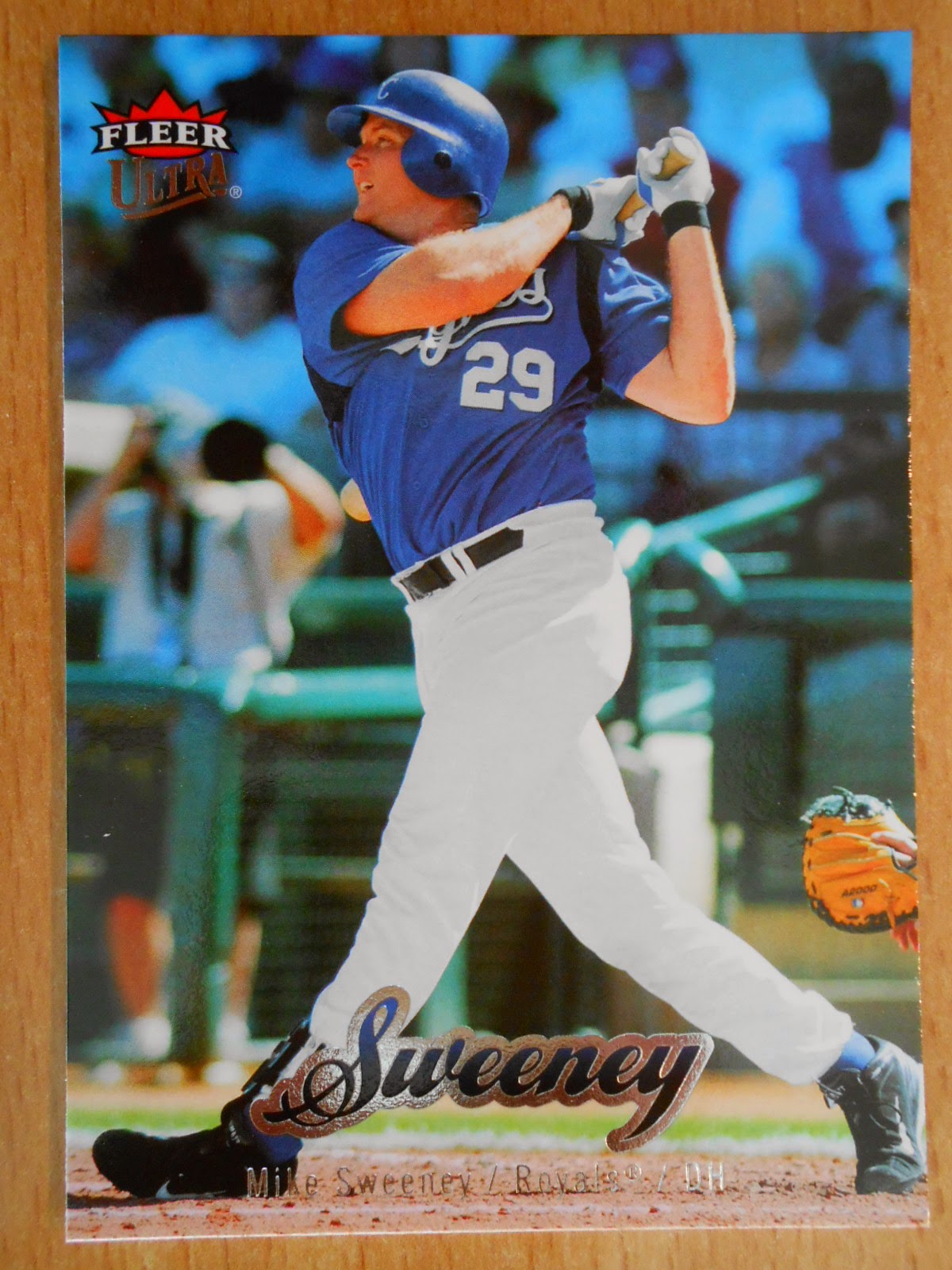 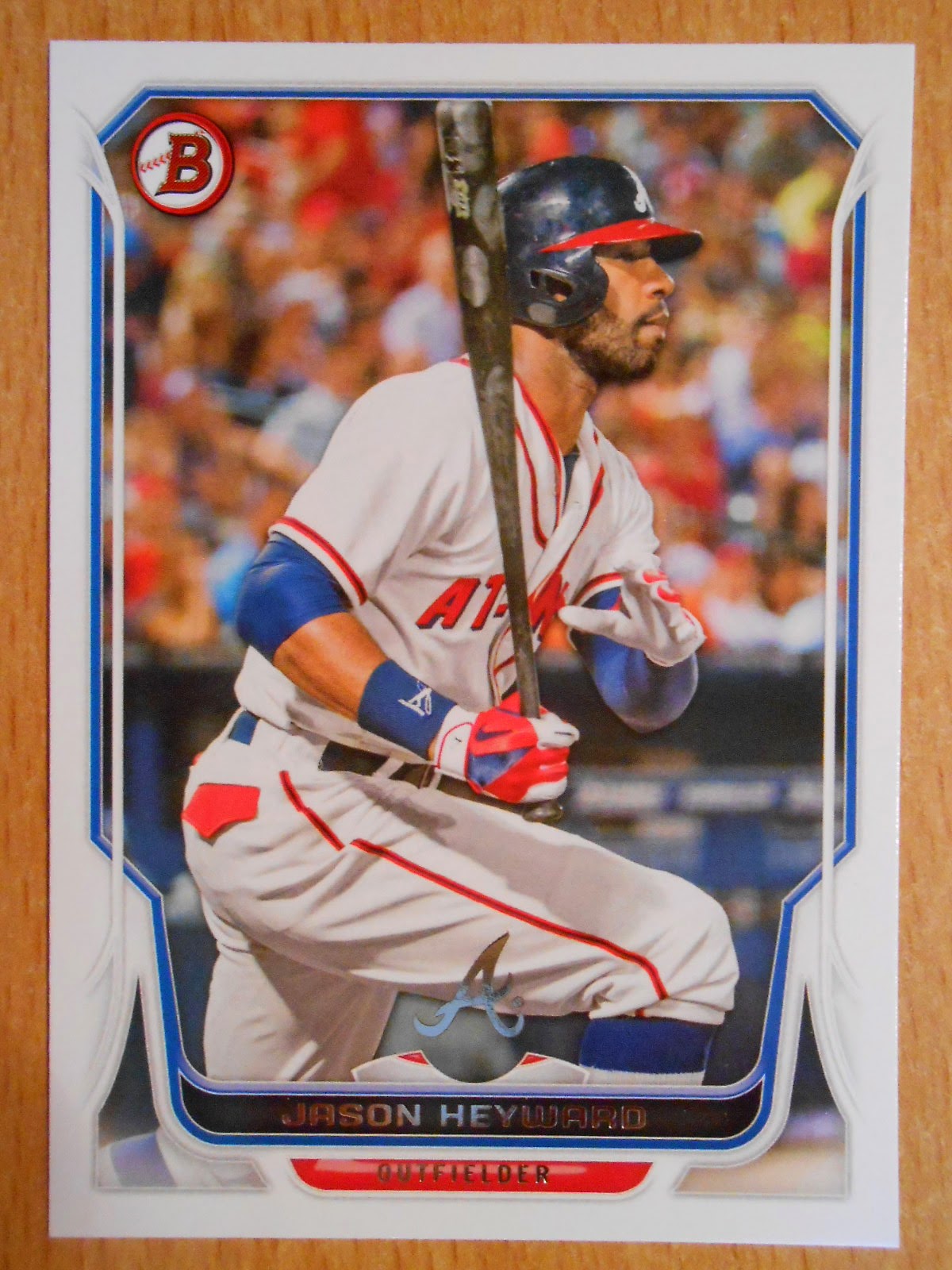 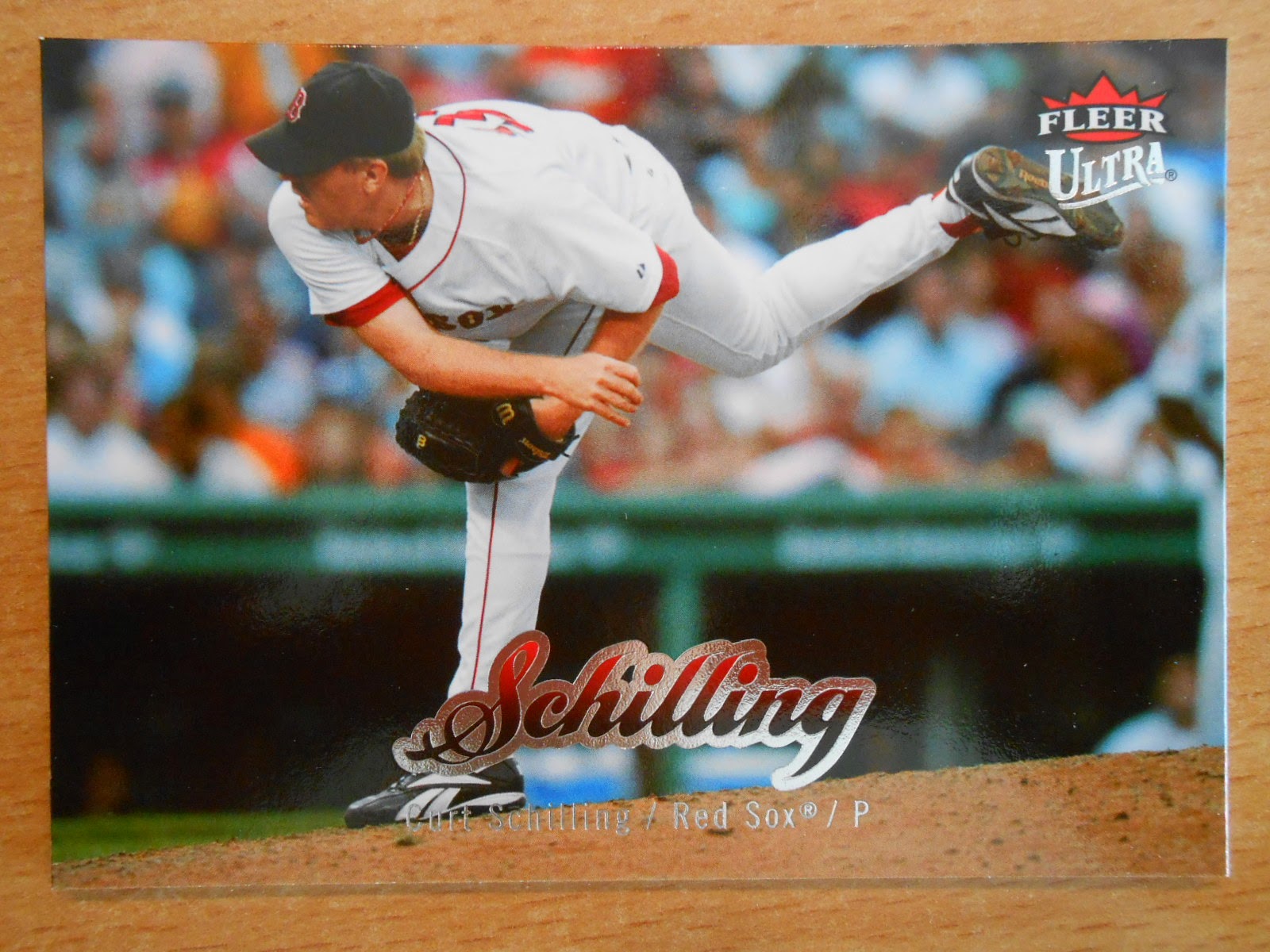 J-Hey versus Curt Schilling and his bloody sock.  I love a good horizontal card, but the location of "Schilling" blocks my view of the bloody sock.  On the flip side, the Heyward card is cropped entirely too close for my liking.  Point to Ultra. 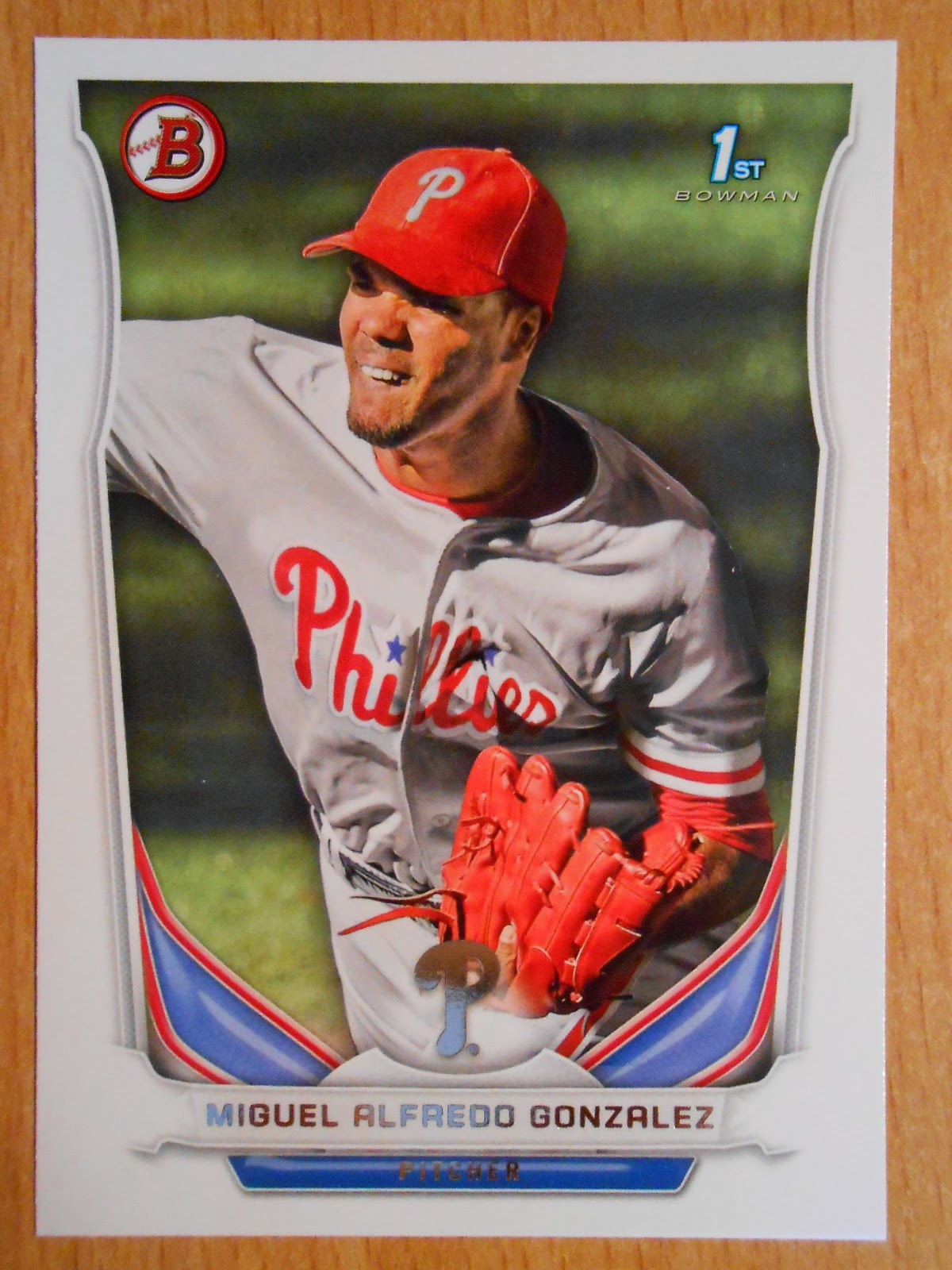 Really tight cropping against another horizontal shot.  I know Miguel Gonzalez was a "big" international free agent signing for the Phils, but I love that picture of Michael Young.  Is that ball going to be a double in the corner or maybe just a loud strike?  Doesn't matter, the point goes to Ultra. 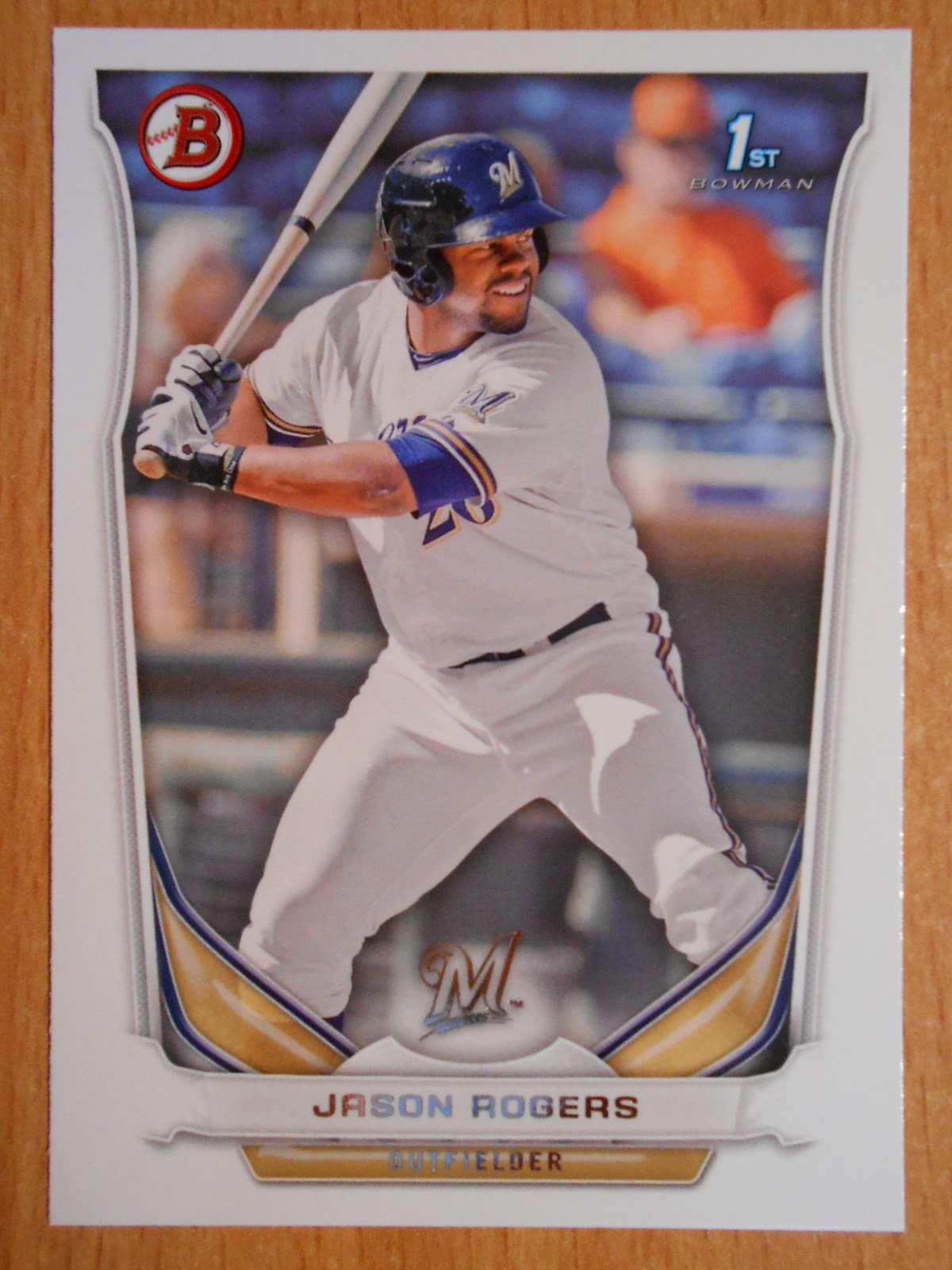 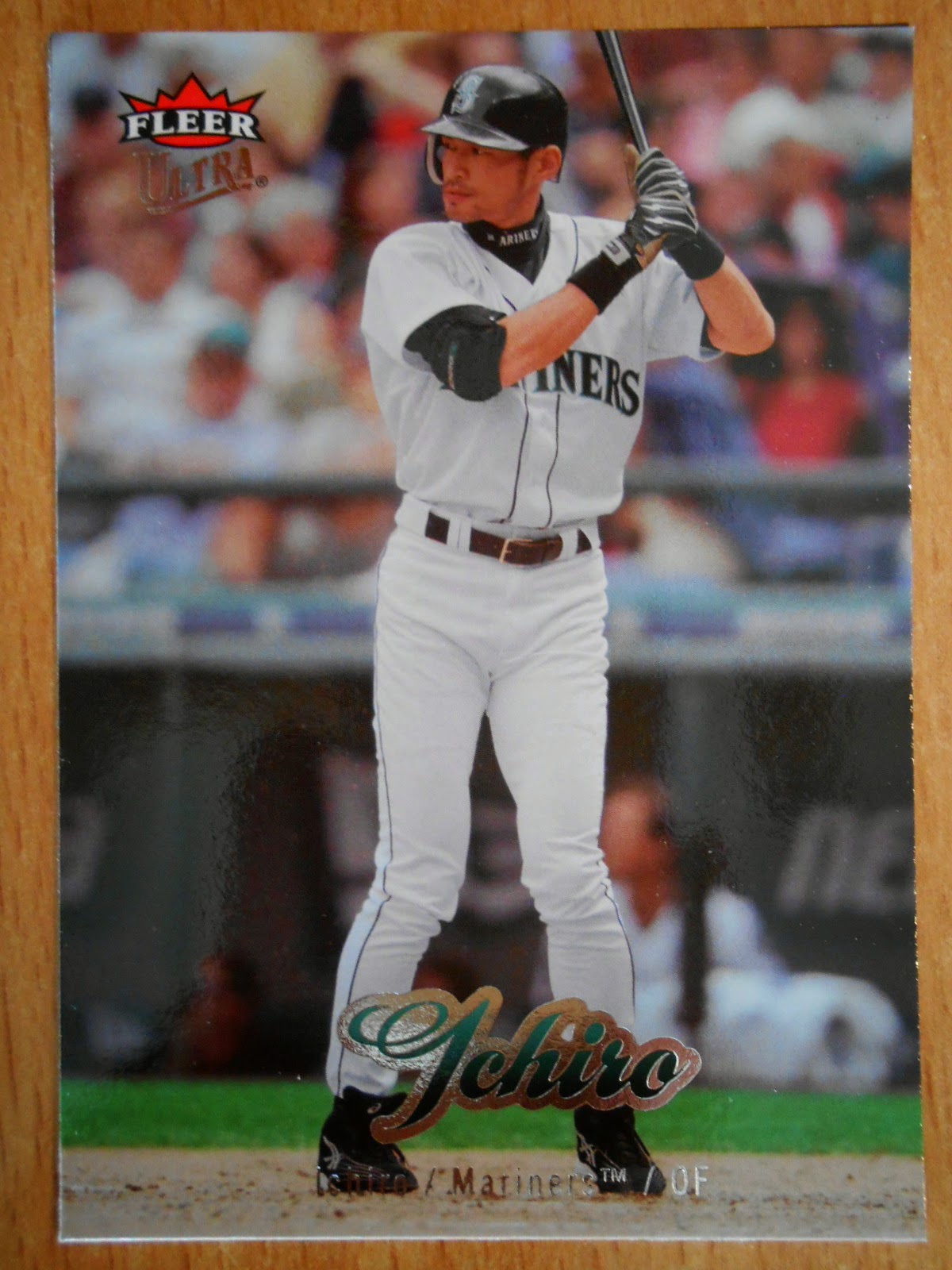 Jason Rogers versus Ichiro.  Point to Ultra.  No explanation necessary. 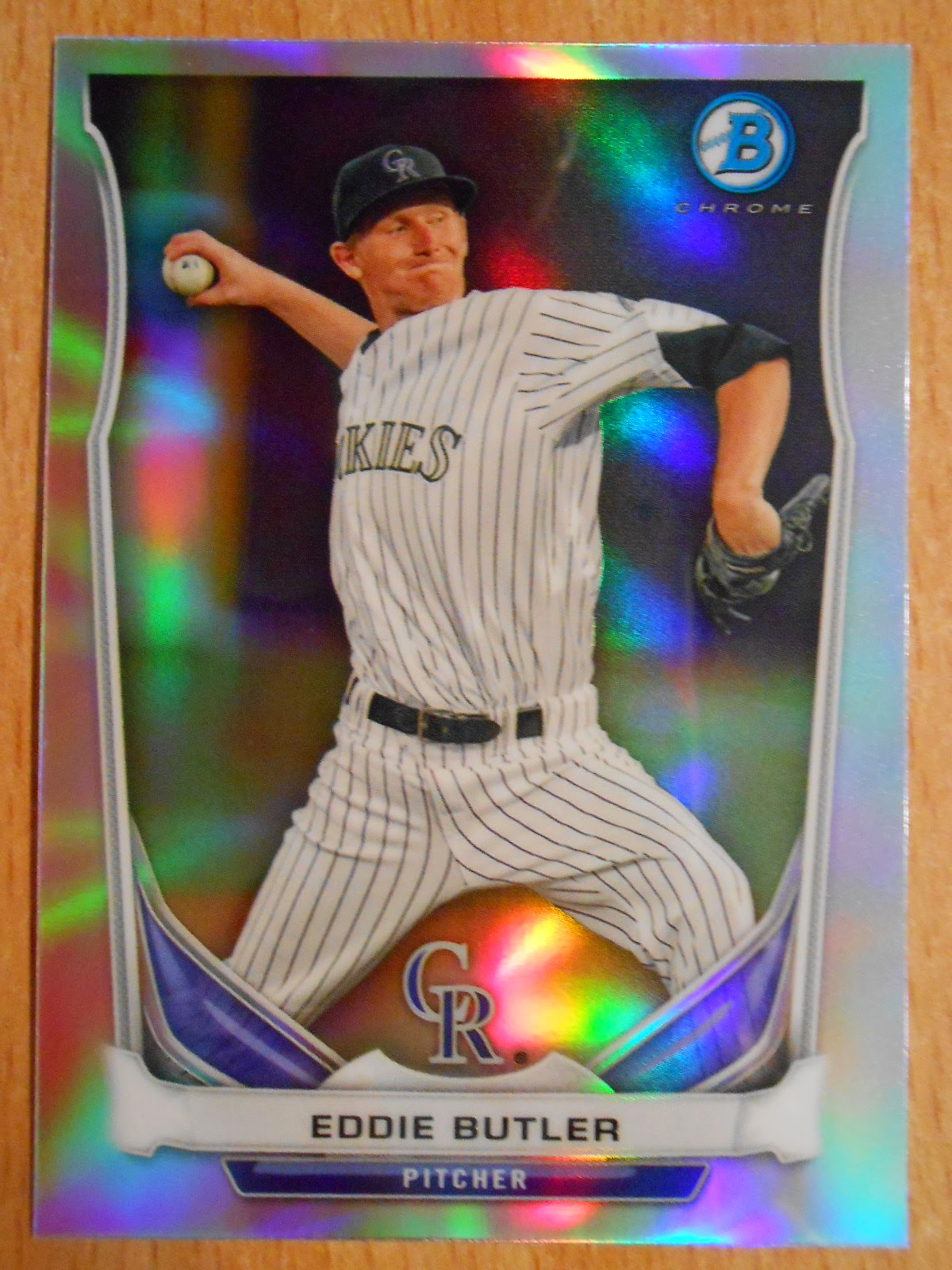 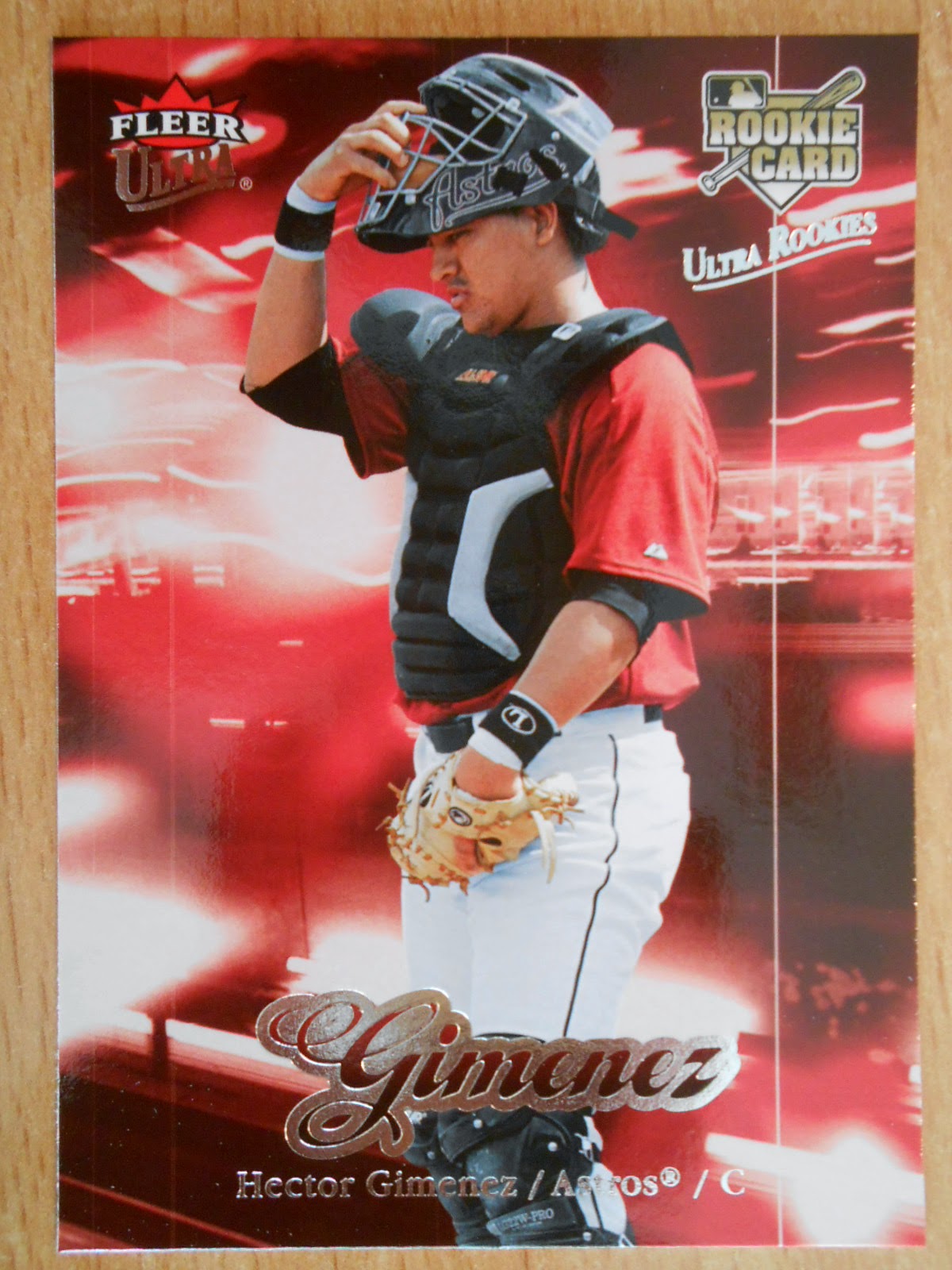 A mini chrome card of the Rockies #2 prospect versus Hector Gimenez.  Hmmm...  One prospect with potential left pitted against a failed prospect.  The point goes to Bowman, because of the inherent potential of Eddie Butler.  Besides, it's a MINI! 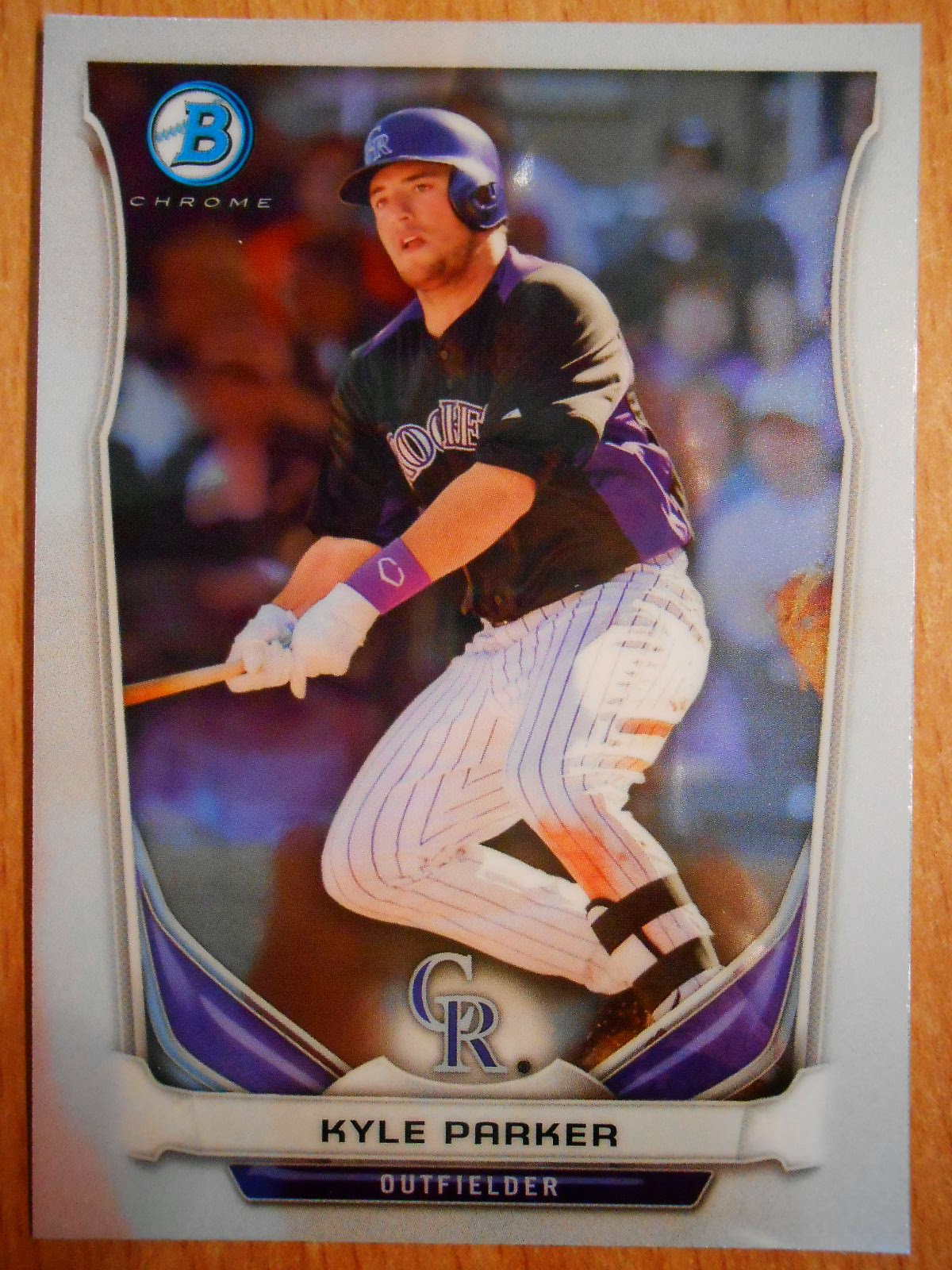 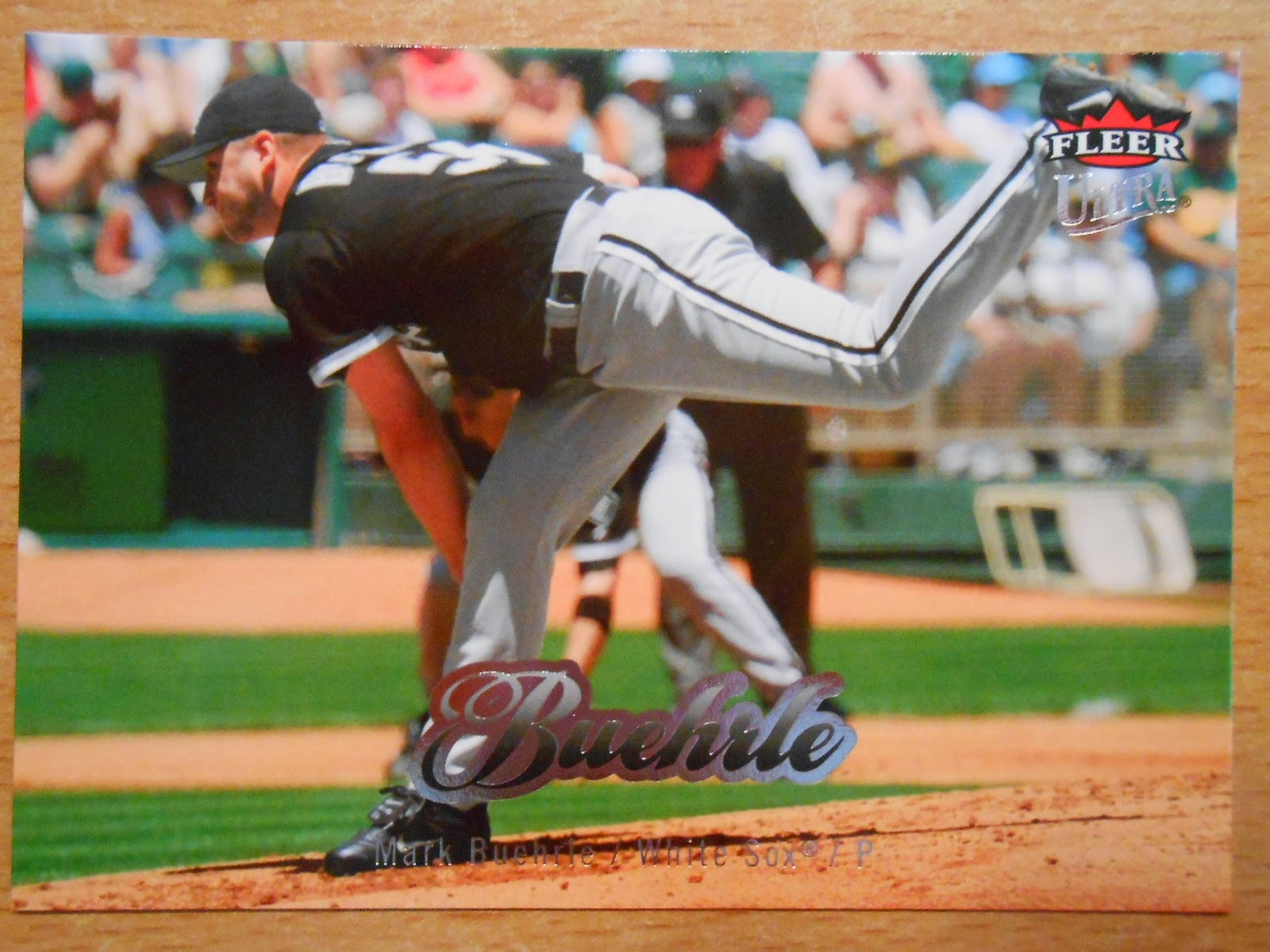 A chrome card of Kyle Parker against another horizontal pitcher.  There's not much difference between this card of Mark Buehrle and the Schilling card from earlier.  I'm a fan of Buehrle, but not a fan of repetitiveness. Bowman ties the match. 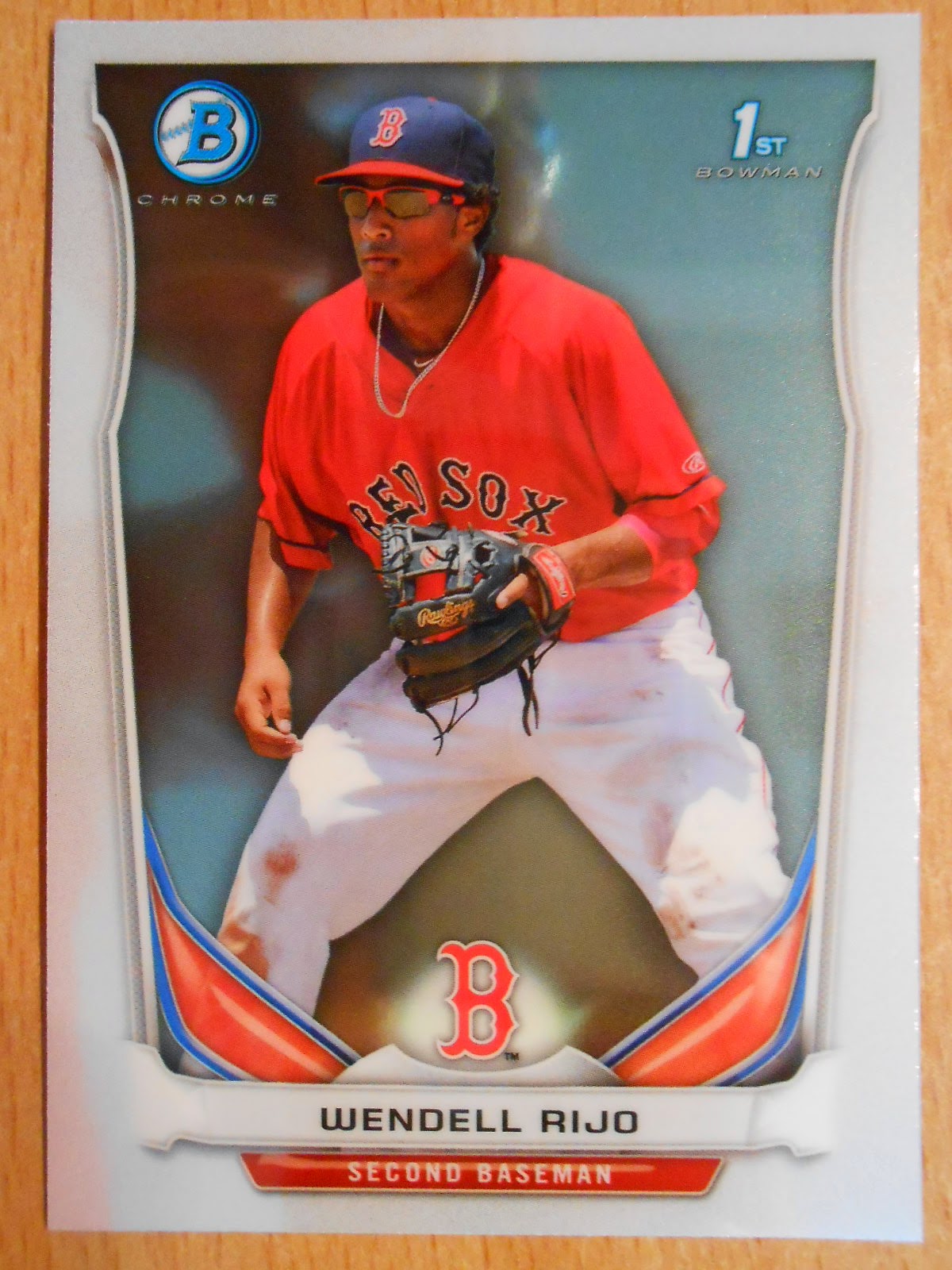 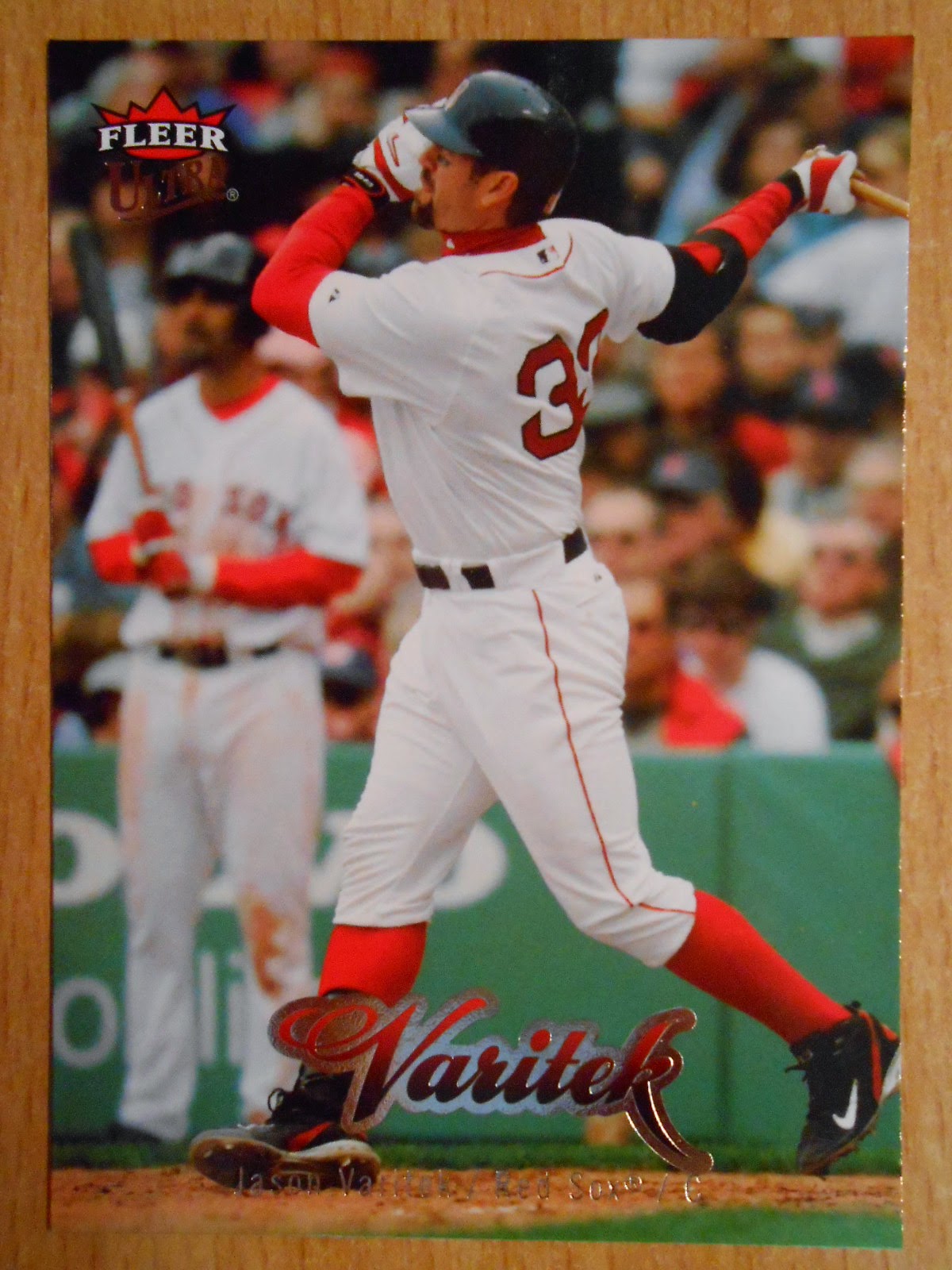 A possible future Red Sock against a past Red Sock.  Is "Red Sock" really the singular form of Red Sox?  No matter.  That's a beautiful shot of Varitek and his follow through.  Bowman is back in the lead. 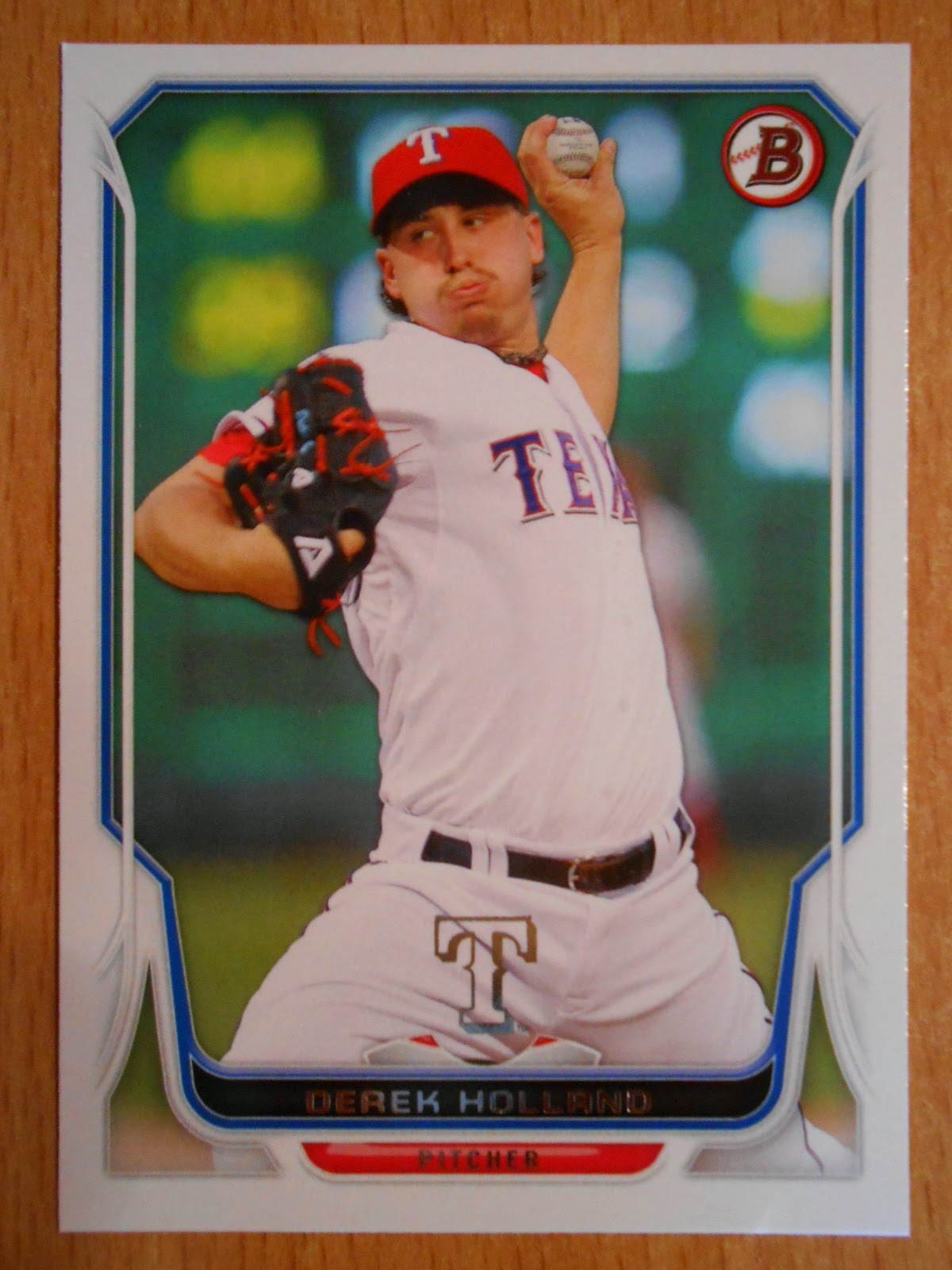 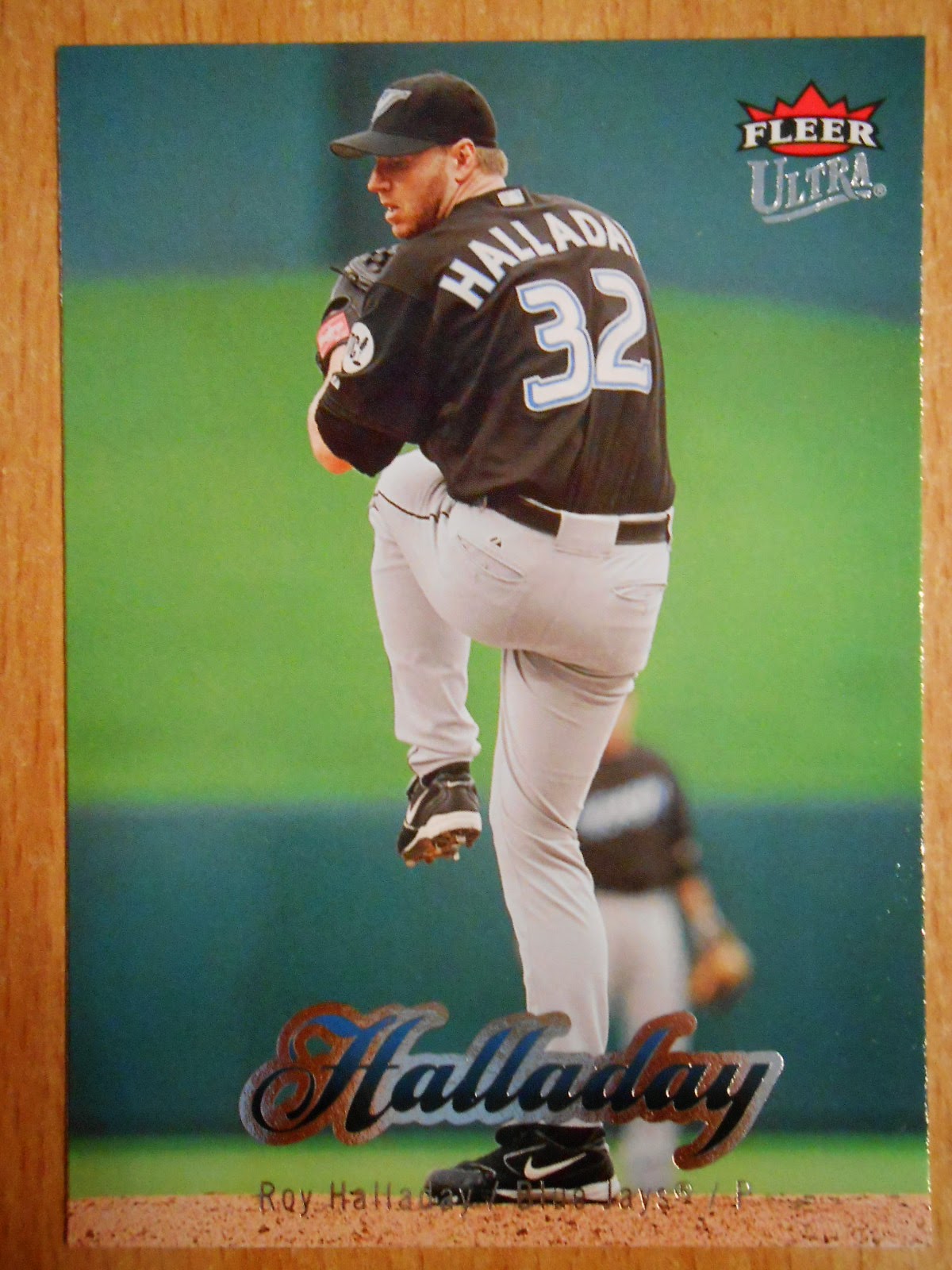 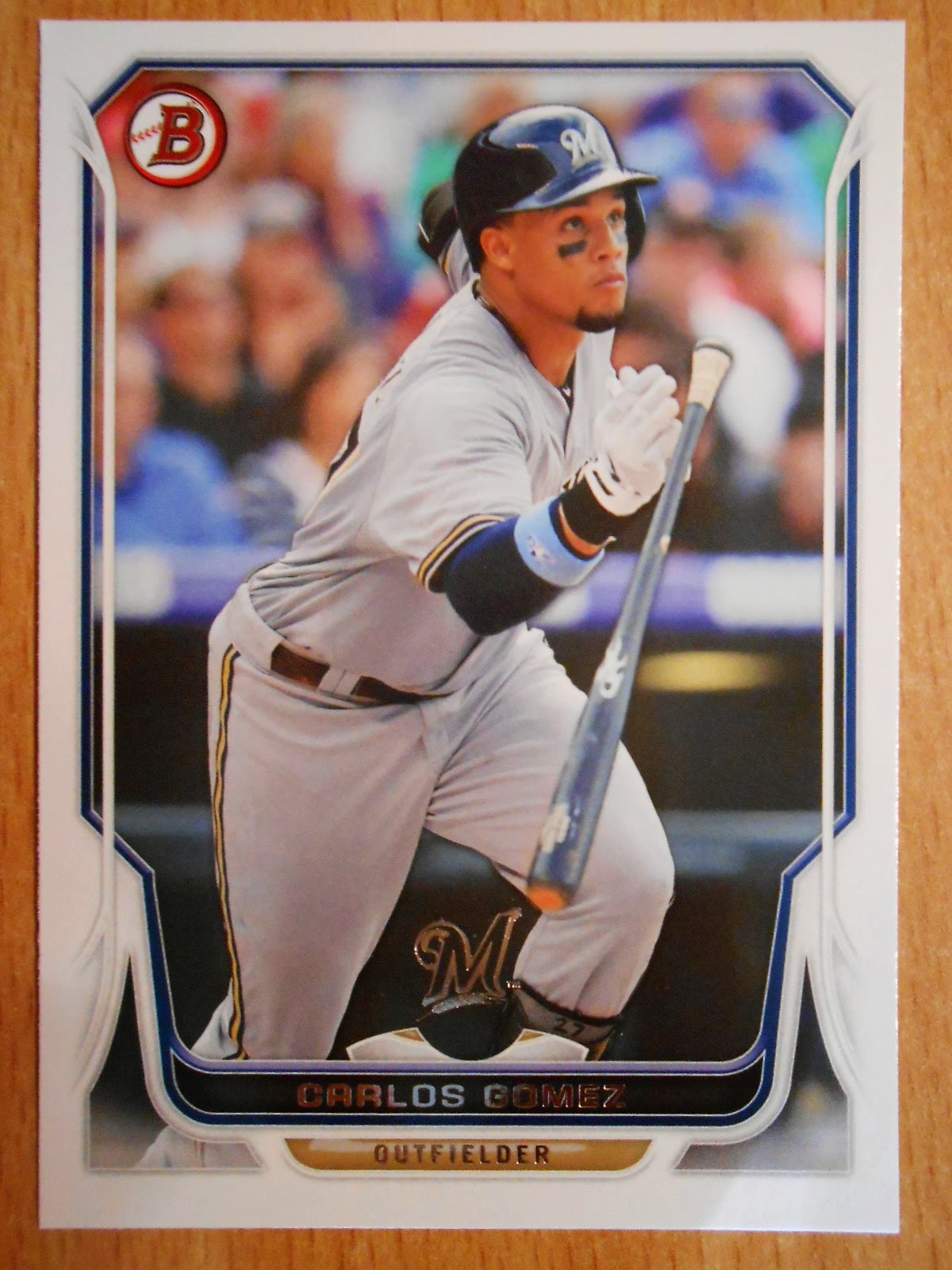 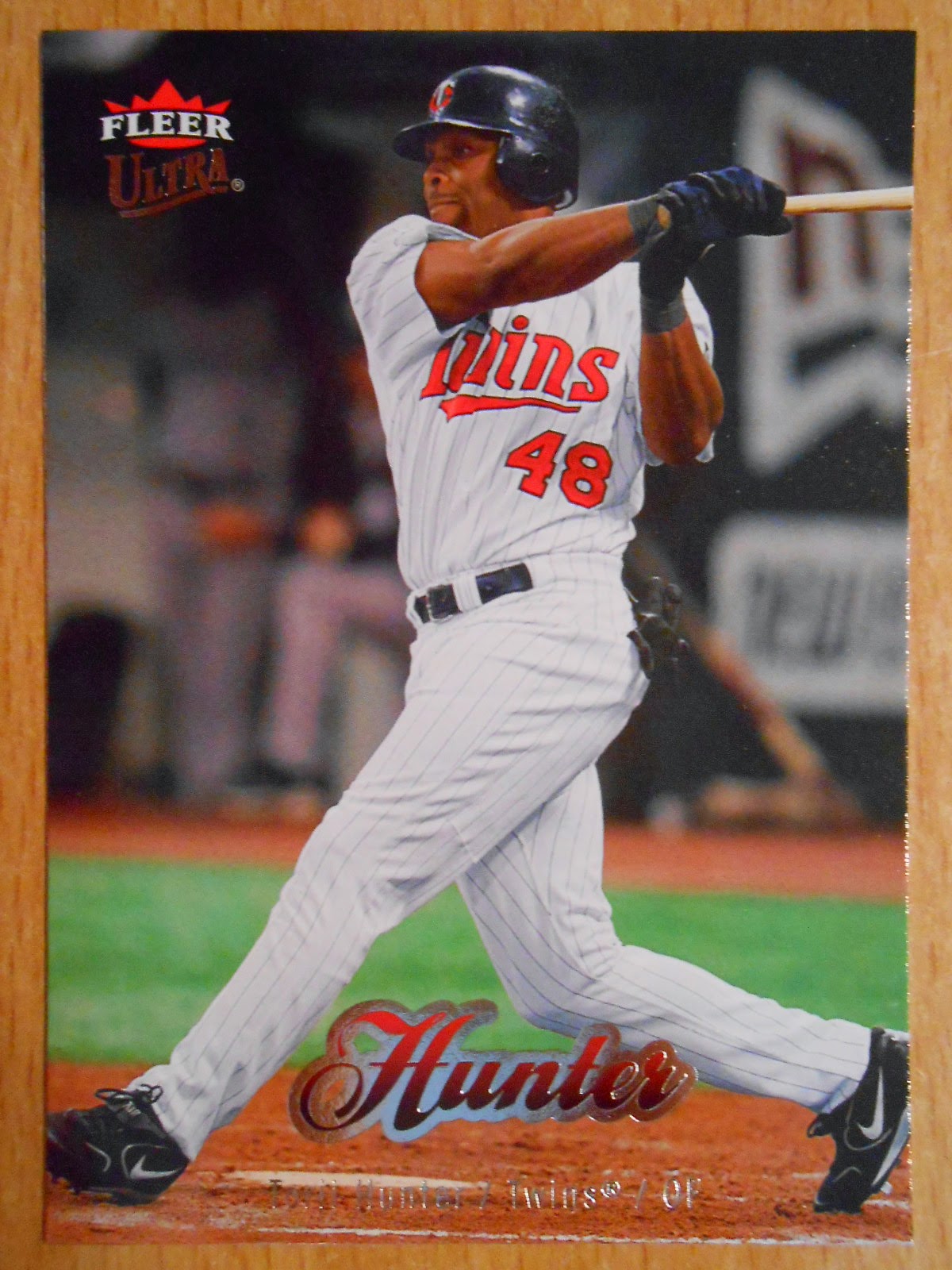 Carlos Gomez and his flamboyant on field personality versus Torii Hunter.  Both players are strong defenders and good all around ball players, but I'll take the guy who doesn't have a habit of getting suspended.  Ultra is back in the lead! 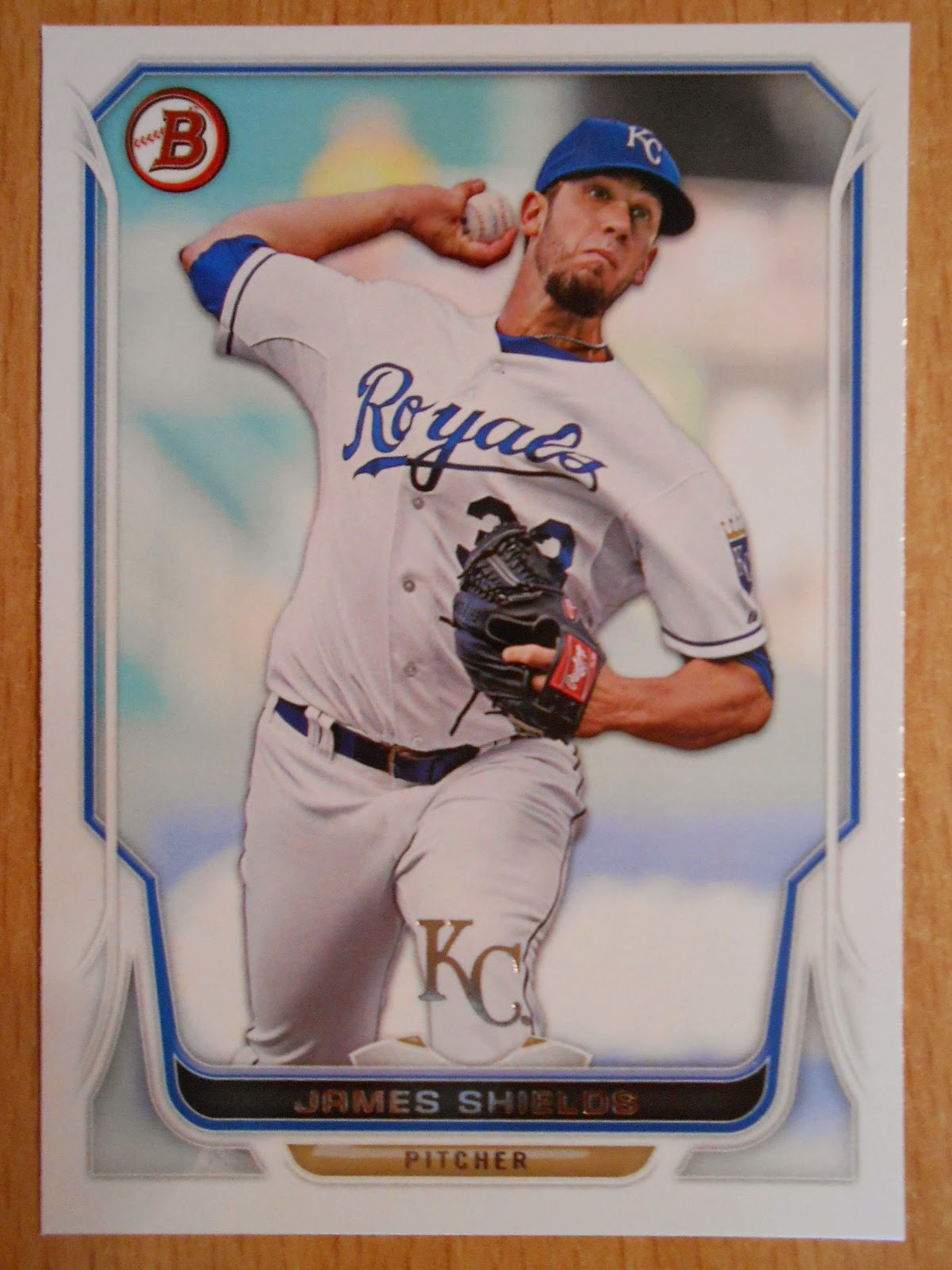 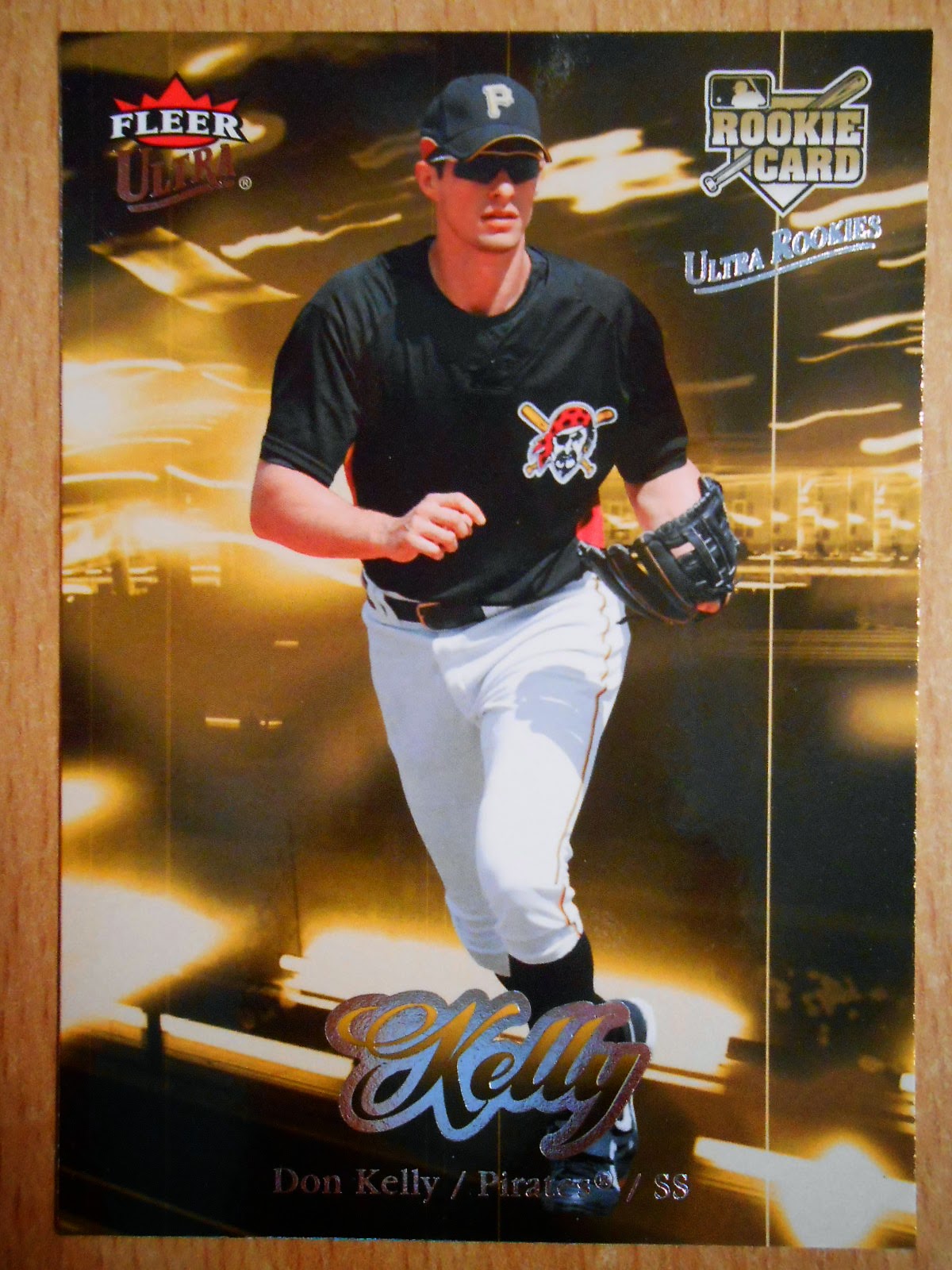 James Shields versus Don Kelly?  Man, what a lackluster way to finish the bout. The shiny lights in the background are the swaying factor for me in this one.  Don Kelly seals the victory for 2007 Fleer Ultra!

The two five-card Fleer Ultra packs came from a repack box, but I think they were more fun to open than this particular Bowman pack.  Am I way off base here or was a pretty "meh" pack of Bowman?