Saturdays in Summer are Super

Yeah, I like alliteration, but I also enjoy stand up paddleboarding (SUP) and picnics with my beautiful wife.  Saturdays in summer are great for outdoors activities, and we took to the water and packed a lunch just a couple of days ago.  What a wonderful time!

Put all your worries on the back burner, relax, and just enjoy life.  That's what I'm talking about!


Later that afternoon I departed on a two hour road trip to Kane County with my sister, Jane, and my baseball loving friend, Jim.

We were greeted by the same guys that play music in the ballpark at Wrigley Field.  The Cubs were on the road so I guess they were looking to stay in practice and made the trip out to Geneva. 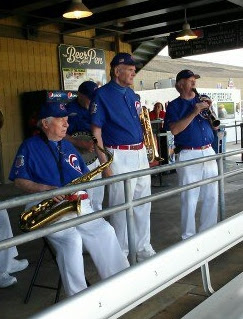 We saw my boy, Dillon Maples, struggle with his control and the Cougars fall 11 to 5.  Bummer.  I have have not had the best luck cheering on my teams this year. But that's okay, because we had many highlights during our evening. 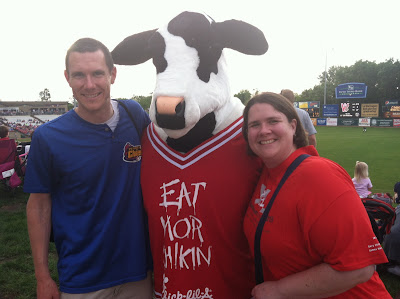 Wait, nope.  That's a picture of me and my sister with a cow from Chik-fil-a.  He wanted us to eat more chicken.  Hmmm... 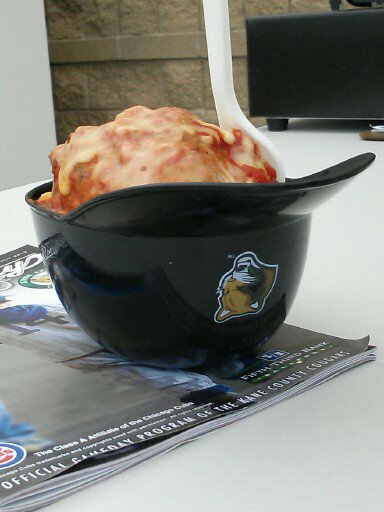 He wasn't persuasive enough: souvenir Cougars helmet filled with one giant meatball covered in mozzarella cheese and sauce.  Man, that was a legendary meatball!  Definitely not chicken!

The Chik-fil-a cow wasn't the only mascot in the building.  The Zooperstars were entertaining the crowd between innings and they're always good for a few laughs.  To the left is a shot of "Cow Ripken, Jr.". 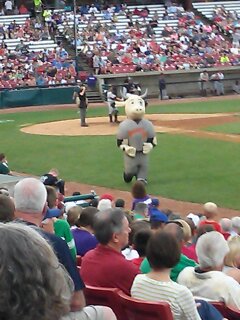 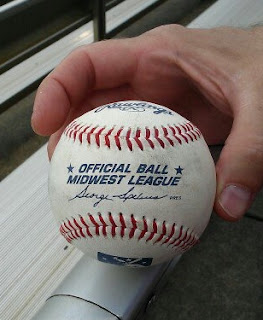 The picture above on the right is the foul ball my sister caught off of Reggi Golden's bat.  Nice job, Jane!

Before the game the three of us played a few games along the concourse and came away with Star Trek posters, a hat that advertised the Bad News Bears movie, a t-shirt, and a free ticket voucher to a WNBA game.  Man, they are crazy generous in Kane County!

Generous?  Man, I haven't even touched on the baseball card slant yet.  It was team set giveaway at the admission gate.  Single A team set of the future Chicago Cubs?  Yes, please!

Oh, there's more...  the Cougars do a fifteen to twenty minute autograph session before each home game.  My sister collected six players' autos on a ball.  Jim got Dan Vogelbach's autograph and talked to Albert Almora a bit while receiving his signature as well.

Let's start with the autographs from players on the new team set I was just handed.

Rock Shoulders, the designated hitter, has twelve homers on the season and is also known for winning milb.com's Moniker Madness contest for the best name in minor league baseball. 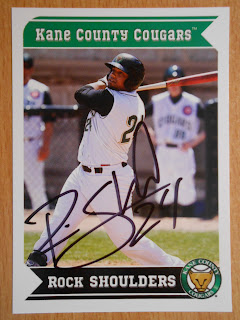 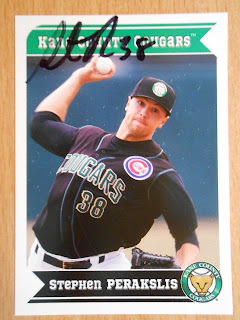 Stephan Perakslis is the newly anointed closer for the Cougars.

The next two cards are both from the 2012 Peoria Chiefs team set, back when they were affiliated with the Cubs.

Oliver Zapata batted lead off on Saturday and anchored down left field for the Cougars.  He showed great hustle backing up Albert Almora when Almora just came up shy on a diving attempt in centerfield. 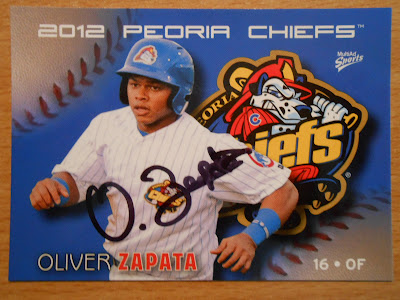 Reggie Golden was the Cubs' second round pick in the 2010 draft and he is ripped.  The dude has a build that would make most NFL linebackers jealous. 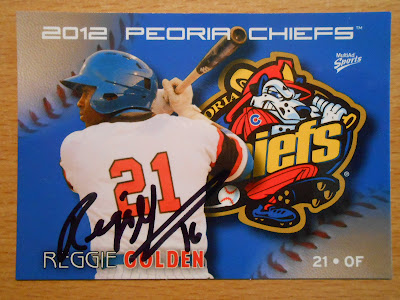 How about some Bowman?  Sure, why not!

Jeimer Candelario won't turn twenty until after the season, but has twenty doubles already and shown a decent eye.  I like Jeimer because he's a switch hitter, has shown a good eye, and he hasn't started to fill out that big frame of his yet.  Jeimer's card is from the 2012 set.

Gioskar Amaya, from this year's Bowman set, is another young player who reminds a ton of Darwin Barney.  Steady, heady, and very smooth in the field. 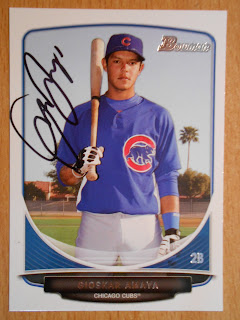 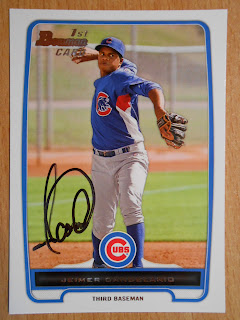 My sister got this Albert Almora card (2010 Bowman) signed for me when she was getting her ball autographed.  Almora, the #6 overall pick in the 2012 draft, stands out from the crowd talent-wise.  He was using a bad pen, but I'll take what i can get! 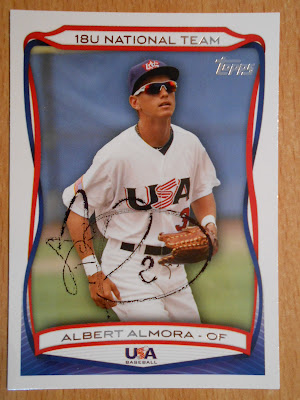 Here's my favorite from the group and the one autograph I wasn't going to leave Kane County without tracking down.  Dan Vogelbach on a thick 2011 Bowman gold parallel.  He's trimmed down since that picture, has proven to be a great teammate, has a great sense of humor, and has light-tower power. 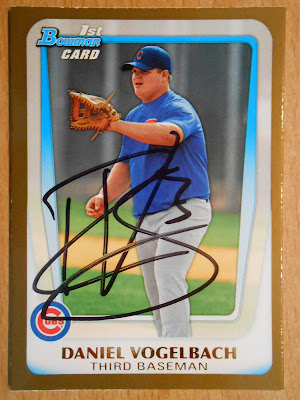 Yeah, I have another man crush.  I'm such a fan-boy sometimes.  With Rizzo at first base I almost wouldn't mind seeing the designated hitter be adopted by the NL just to see Vogelbach truly fit with the big club.