I sent "Eric the Red" to Topps... Lifetime Topps Project that is.

A week ago I was fortunate to pull a Fan Favorites Autograph of Eric Davis from the one hobby pack of 2013 Archives that I'll purchase this year.  Why just one pack?  Well, because everything else would pretty much be a let down after pulling an auto of Eric the Red in the first pack.

Charlie, from Lifetime Topps Project, contacted me about my lucky score.  He's apparently an avid collector and is working on amassing every single Topps set since he was brought into his crazy card collecting world.  Ambitious!  Charlie also has a growing player collection of Eric Davis.  Nice!

So, let's see what Charlie sent me in return for the Davis autograph and a good helping of Topps cards from his want lists. 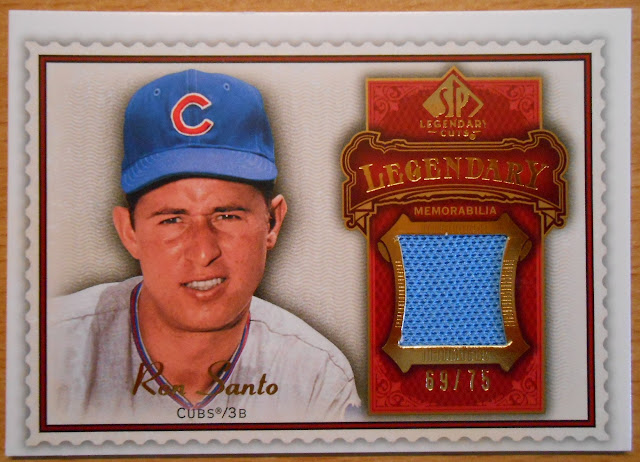 Man, what a sweet looking card of a young Santo.  I'm guessing the jersey piece is from one of those powder blue jerseys from back in the day. This card is now my favorite Santo in my collection!


I believe these Gold Rush cards were a wrapper redemption from last year.  I always forget to send in my wrappers before the deadline.  These are pretty slick looking! 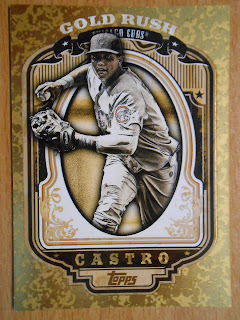 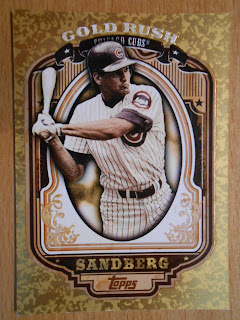 Sparkly Cubs!  Soriano from 2011 Lineage and Randy Wells (now retired) from 2012 Topps.  And no, Randy Wells is not retired because he ate all of his gloves. 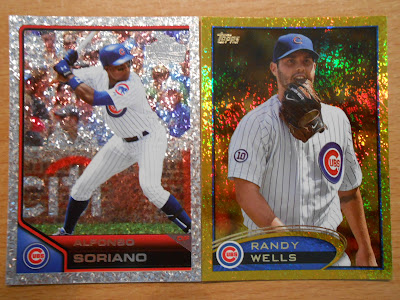 2013 Archives! Two of the Cubs' core pieces.  I don't remember Topps using this border color scheme in 1990 , but I really like it. 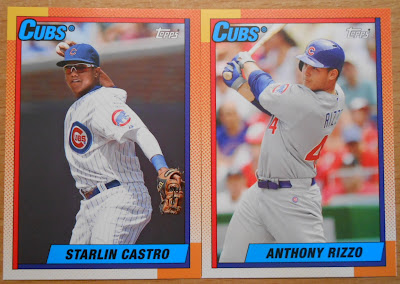 Two Hall of Fame outfielders! First we have Andre Dawson on a 2011 Topps 60 card that highlights the Hawk's RBI total, which stands as the 10th highest in franchise history.  The other is a SP Authentic card (#'d to 499) that notes Billy Williams 1 for 2 performance in the 1974 All-Star game, although the front gives billing to Yogi Berra.  Odd.  Berra must have been the manager. 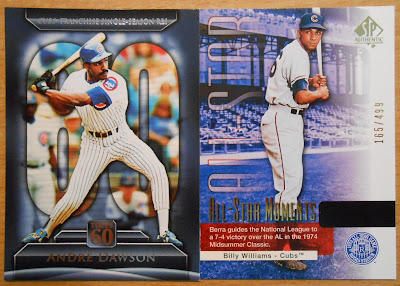 A third outfielder for the Cubs, but I don't think this one will wind up in the hall. Alf has been pretty productive though during his tenure at the Friendly Confines. 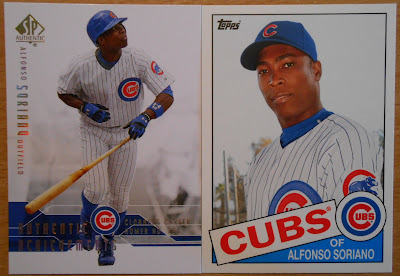 A couple of former Cubs: Derrek Lee and D.J. LeMahieu.  Both cards are new to me, sweet!  I love that D.J. appears to be shoving A.J. Pierzynski! 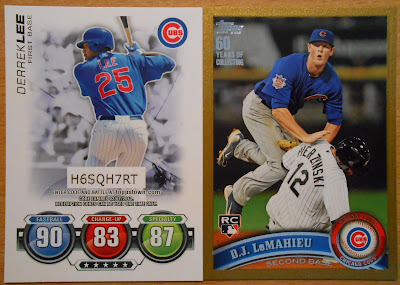 Oh, and D.J. is a former Cub because we sent him (and Tyler Colvin) to Colorado for this guy: 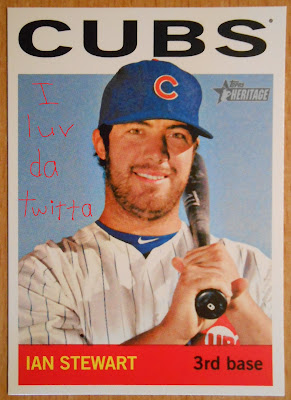 Man, that was a bummer of a deal.  Hopefully the Cubs brass shows him the door before too much longer.  Or better yet, let him rot in AAA and then non-tender him, because I don't like the idea of him finding work with another team while we still pay him his two million dollar salary.  Stewart is right up there in my book with Milton Bradley and here's why.

Thanks for the fabulous Cubs cards, Charlie!  (Even the Ian Stewart.)  We'll have to trade again sometime!