Rolling the Dice on a Tribute Box Break ... and Winning!

I participated in Nachos Grande's 2013 Topps Tribute box break.  Normally, I don't go much for the high end products, because the odds of pulling something you'd actually desire just aren't that strong.  Rather than rolling the dice you might as well save the cash and purchase the few singles you're dying to add to your collection. I don't think I'm alone on this, especially for those of us on a cardboard budget like myself.

Yet, I was feeling frisky and decided to ante up.  Naturally, I snagged the Cubs and after a trade I also had the New York Mets to also tie my hopes to.

For those not in the know, a box of Tribute contains six packs and each pack possesses five cards.  That's only thirty cards in the entire box!   Since there's thirty teams in baseball that meant each time a team pulled a second card from the box another team would be shut out.  Yikes!  That's cut throat!

No Mets in the entire box?  No worries.

Man, was I feeling the crunch. I was almost shut out! The last card of the last pack was mine: 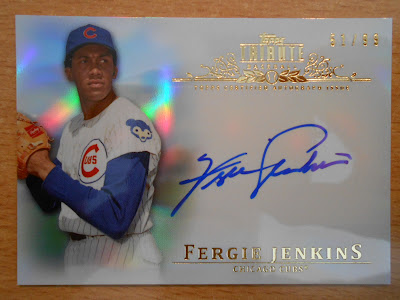 Here's the back for those of you that are curious: 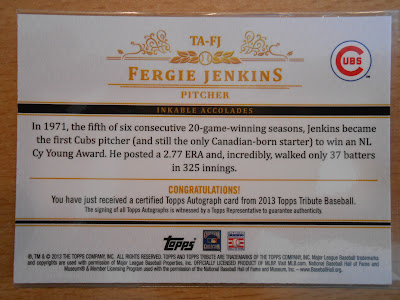