GQ, then and now.

Back in my younger days I hung out with a guy that named Jon who had his own time: JGQ time.  If we wanted to pick Jon up at 8 o'clock we'd tell him we'd be buy at 7:45.  Why?  Well, he always had to look "good" before going out on the town.  My friends and I joked around with him and said that he reminded us of the guys that grace the cover of GQ Magazine.  In all honesty, I think we were a little jealous, because he made an effort and definitely stood out among us.

Fast forward a good fifteen years: Maybe I can make you jealous with a different type of GQ?

I stopped in my local card shop today and was disappointed to learn that there hasn't been any new products released lately.  I talked a little baseball with the owner and eventually settled on a couple of Cubs cards an a pack of 2013 Gypsy Queen.

Here's the highlights of the pack!

The lead card was Mr. Evan Longoria and right behind him was the Cardinals' rookie phenom, Shelby Miller. 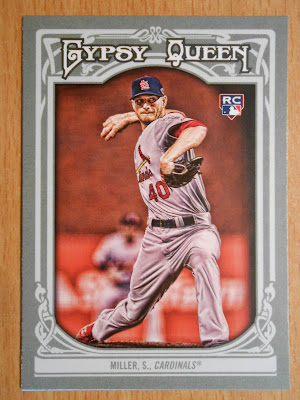 I wish I would have opened this pack in the store, because the owner, who is a big St. Louis fan, would have swapped me something nice for it.  Bummer.  Now that it's home I may have to put it in a top loader and hang onto it for a spell.

Third card?  Manny Machado! Nice.  I love prospects, and this pack is definitely bringing the youngsters! 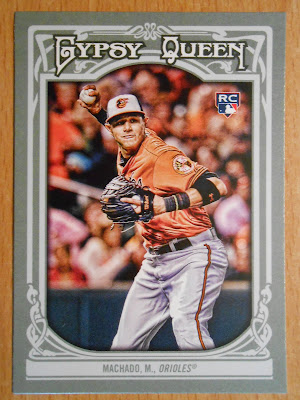 The next card was slightly stuck to the back of Machado. Not stuck like glue, but more or a "static cling" type connection and as I tried to separate the two cards the mini dropped to the floor and now Justin Upton has a dinged corner.

Sometimes those minis really drive me crazy.  I've opened two GQ packs this year and pulled both of the Upton brothers.  Weird.  The other one is now part of Jaybarkerfan's Junk, but if you'd like a dinged Justin Upton just give me a holler.

The card that was stuck to Machado?  Oh, just another Atlanta Brave. 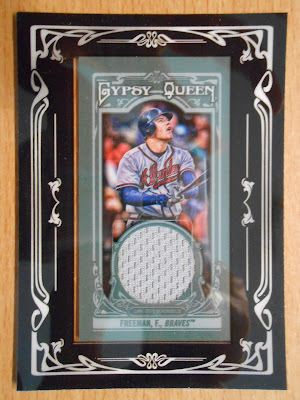 Sweet!  A mini, framed relic card!  This is my first framed mini that I've pulled in my pack-ripping days, and I must say it's a pretty sweet looking card.  There's a cutout in the plastic that covers the card so that you can feel the jersey swatch, which is a nice idea I suppose, but I'm not really into feeling my cards.  Sometimes smelling, but never feeling.  I know.  I'm a little different.

Oh, for what it's worth, the Freddie Freeman is up for trade.

Moving on, the next card that stood out was Bill Mazeroski. 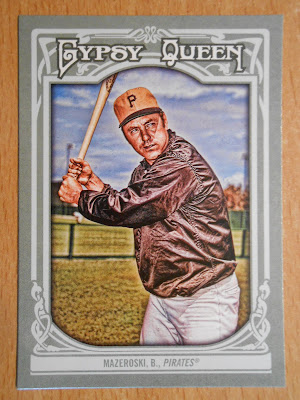 There was a time where I hoped Ryne Sandberg would be mentioned in the same breath as Mazeroski.  Yeah, no worries there as Ryno also now has a plaque in Cooperstown. 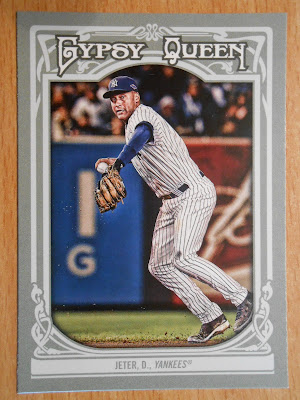 Normally I don't think much about Derek Jeter, but he's been injured and had a rough go of it.  I don't wish injury on anyone and I hope he's able to bounce back.  In the meantime, I can't help but wonder who'll start at shortstop for the American League in the All-Star Game.  Oddly enough, the game is New York's NL ballpark this year and I'm sure Jeter would have received a nice ovation regardless.

So, what do you think of my GQ pack?  I don't think it would have impressed my friend, Jon, very much, but I'm pretty happy with it!