Welcome to another edition of Pack Wars, everyone!  I haven't opened an 2014 Topps yet and I figured it was about time.  Let's bust into one of the unopened repack boxes under my desk and find a contestant.

Tonight's match-up will be a ten card battle and pits the new kid on the block versus 2008 Upper Deck First Edition. 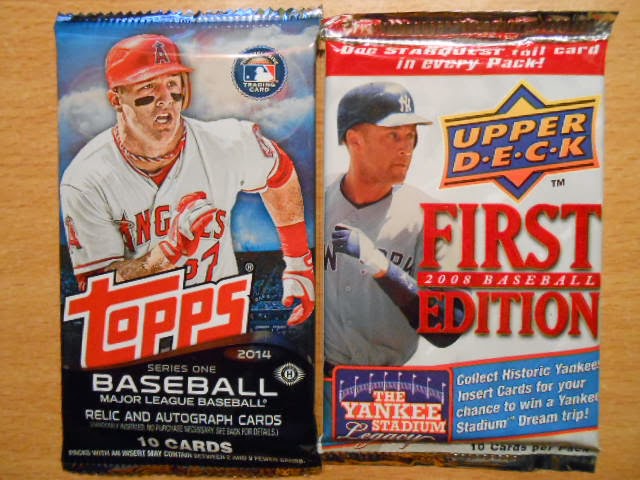 Round #1: Joe Mauer versus Lenny Dinardo. 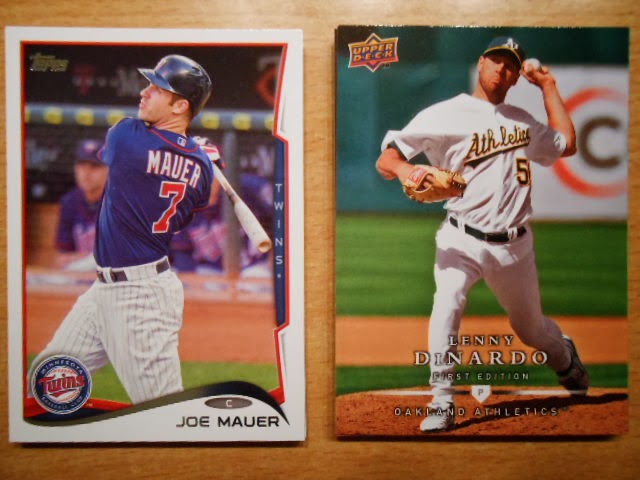 It's an easy win for Topps for two reasons:
1.) Mauer is easily one of the best catchers in the game
2.) This is my first card from the 2014 collecting line
Besides, Lenny Dinardo hasn't played with an MLB affiliated team since 2011.

Round 2: Hanley Ramirez vs. Shawn Chacon 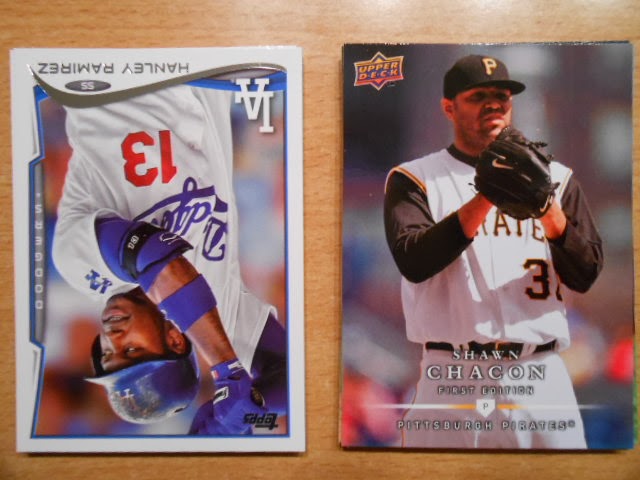 Topps.  Grrr...  I had my piles all ready to go and the second card in is upside down.  Hanley is a stud when his head is on straight, but in this picture he's standing on his head.  The point goes to UD, Shawn Chacon, and no-sleeve jersey tops. 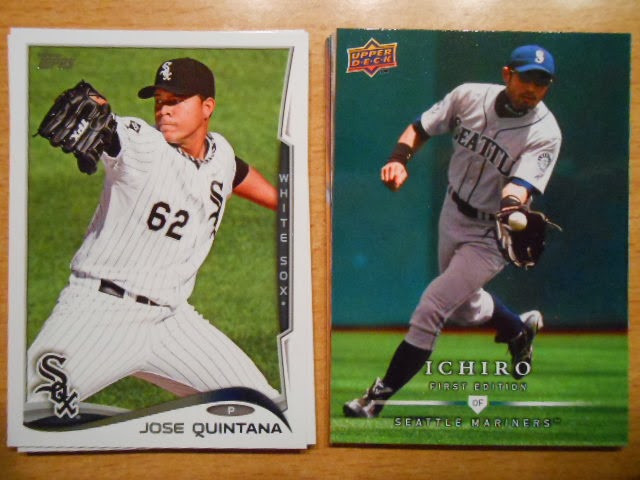 A poorly cropped Jose Quintana and a guy who has over 4,000 career hits.  Easy call. 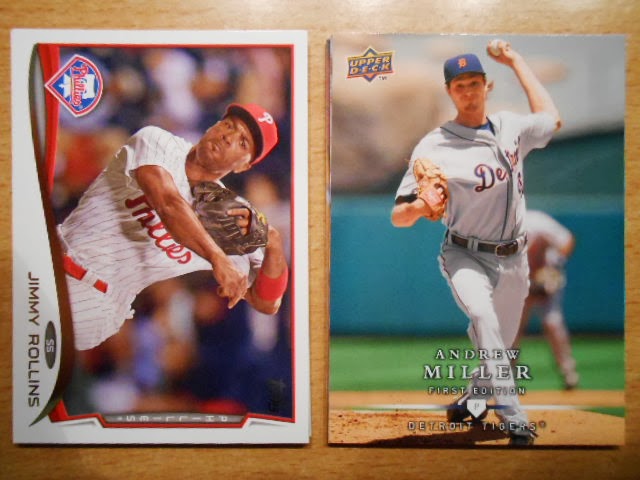 I must say that I feel the tab on the side of the Topps cards crowds the picture in a portrait format, but I think it works nicely in the landscape shots.  J-Rol is the man.  Point, Topps. 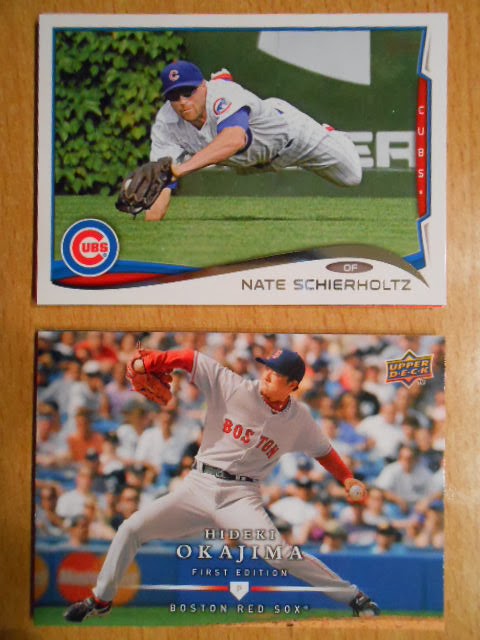 Round 6: Alex Gordon vs. Doug Brocail 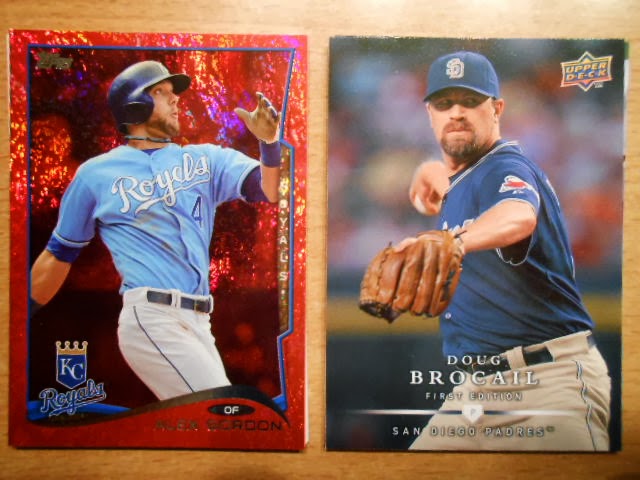 Oooooh, shiny.  I really like the blue sparkly cards that were in 2013 Opening Day.  Those were my favorite parallels last year.  This ruby red one?  Meh.  Doug Brocail?  Double-meh.  Point Topps, because Doug's last name is too close to "broccoli" for me to seriously consider. 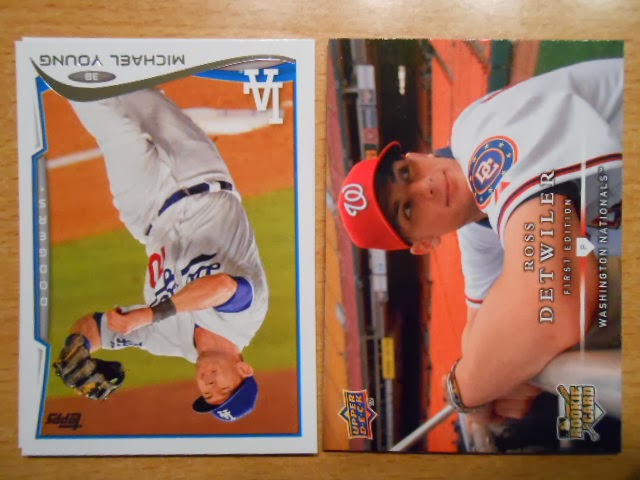 Man. Upside down again.  2014 Topps were not made for Pack Wars.  This point goes to UD and Ross Detwiler. I'm hoping Detwiler comes back healthy in '14.  Besides, I've seen this Michael Young card plastered all over the blogosphere and I'm tired of it. Here's a couple of nicely written examples: A and B.  I guess I should have gotten my hopes up thinking each card would be new to me.

Round 8: Franklin Gutierrez vs. Radhames Liz 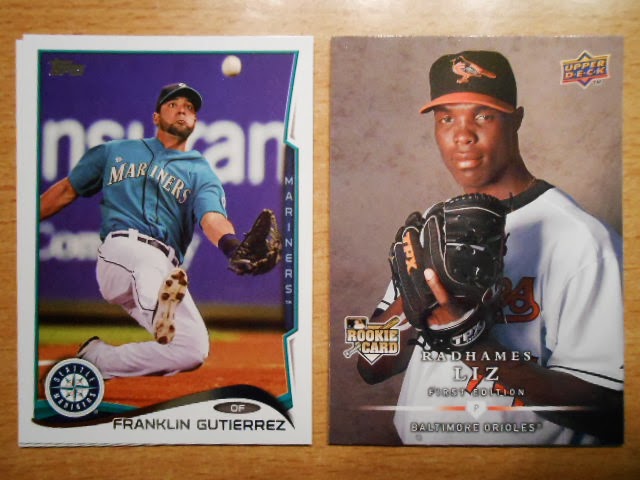 I still wish Topps wouldn't crop most of the cards so closely, but that is a pretty sweet shot and I love the alternate Mariners jersey.  Radhames Liz rookie card?  Liz never had an ERA lower than 6.72 and he hasn't pitched in organized ball since 2010.  Topps takes a very commanding lead. 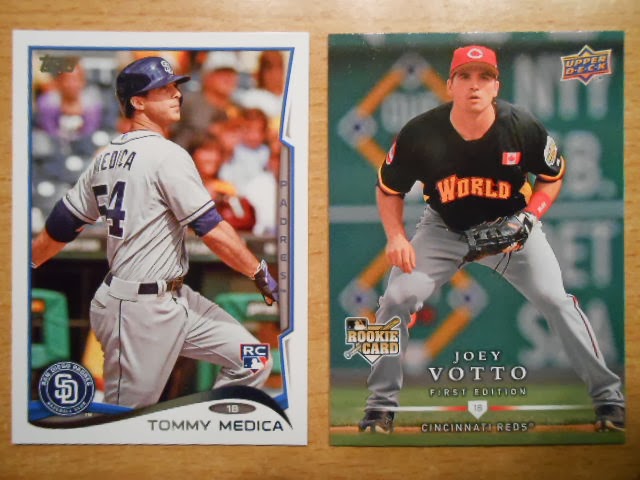 Rookie versus rookie!  Joey Votto is one of the best hitters in the game and he's shown here playing in the Futures Game.  Tommy Medica?  He has some nice power potential, but he's no Votto.

Round 10: Matt Joyce vs. Chipper Jones 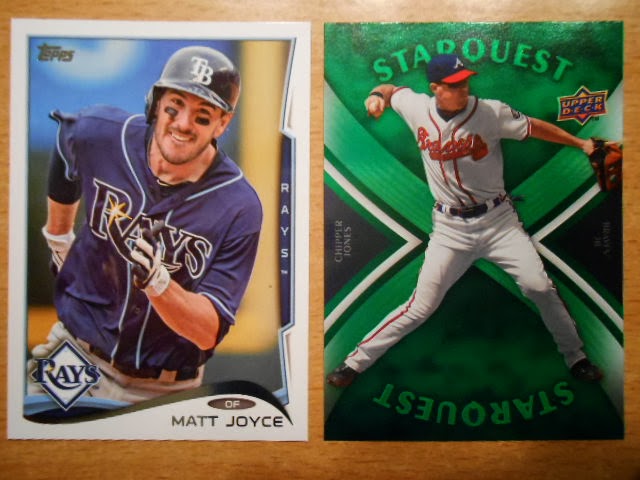 Matt Joyce running the bases versus a Chipper Jones StarQuest insert.  Chipper is hilarious on Twitter, owns a four wheeler, and rescues former teammates in his spare time.  Matt Joyce?  Well, during his rookie season he was Detroit's first player in twelve years to be name AL player of the week.  The point goes to UD and Chipper.

Huh.  To be honest, I didn't think the 2008 UD pack had a snowball's chance, but cards of Ichiro, Votto, and Larry Wayne Jones helped them out a bit.