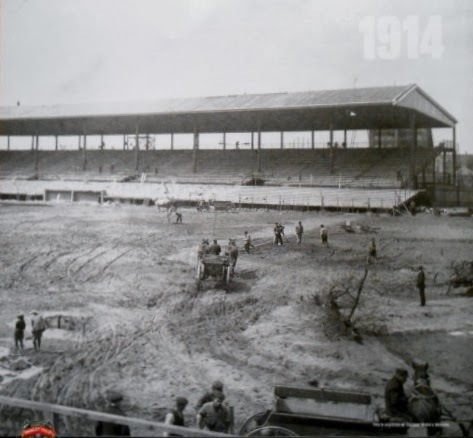 "The Construction of Weegham Park, later known as Wrigley Field, underway at the corner of Clark and Addison.  The project lasted sixty days: February 23, 1914, to Opening Day, April 23, 1914."

The caption of the photo for February states it took sixty days to build the ballpark?  Well, when one figures that it only held 14,000 people when it was first erected I guess sixty days isn't unfathomable, especially when there was no upper deck of bleachers to speak of.  Charles Weegham, the owner of the Federal League's Chicago Whales, paid roughly $250,000 to build the ballpark.  Weegham's money came through a local chain of quick-lunch places and not coincidentally Weegham Park operated the first permanent concession stand within a ballpark.