Unique card #123 came in the other day for my Dan Vogelbach player collection. Any card under five bucks, which is new to my collection, is a pretty good find for this Vogelbach collector.  Outside of printing plates and other high end parallels I'm starting to run out of things to chase! 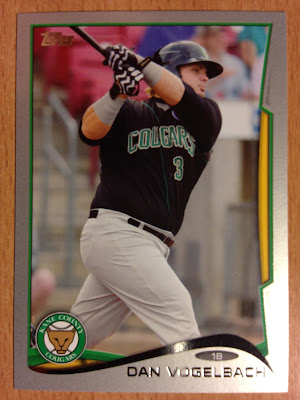 Oddly enough, in the 2014 Topps Pro Debut set the gold parallels are numbered to 50 and the silver have a lower print run of 25. 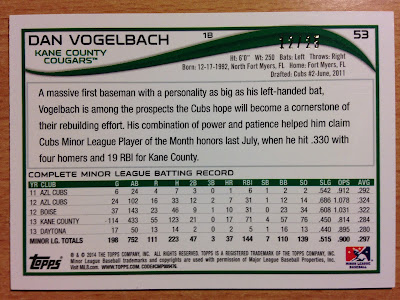 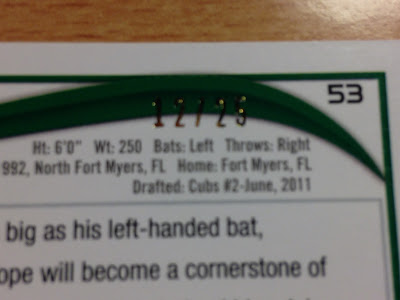 It's a big spring for Vogelbach to show his worth to the Mariners. I did a little research and found some 2017 projections on the Internet for the VOGELMONSTER.

I actually like RotoChamp's prediction. Vogelbach isn't going to hit for a ton of power (yet) as he is more than happy to drive a ball to the gap. In my mind, fourteen homers in 332 at-bats might be a little high, but him hitting thirty extra-base knocks in that many at-bats isn't out of the question.

When watching young players make the jump to MLB I look at BB% and K% as two of the biggest indicators to future success. Vogelbach also has a pretty advanced eye and approach at the plate during his time in the minor leagues. His walk/strike out totals in 2015 were 63/62 (19%/19% in 330 PAs at AA) and in 2016 they were 97/101 (17%/18% in 563 PAs at AAA). Obviously, MLB pitching is much more challenging, but I don't see him struggling to control the strike zone the way CBS Sports predicts: 9% walks and 29% strikeouts.

Overall, I think he'll perform better than the "Average" at the bottom of predictions. My prediction for 334 at-bats (the sheet's average) would be about 18 doubles, 10 homers, 50 walks, 80 strikeouts and a slash line of .262/.359/.422. I did some crunching of the numbers a bit and based his 2017 numbers off his minor league numbers, but I also tried to figure in for the jump in competition level. From what I've predicted his BB% would be about 13% and his K% would be around 21%. I think that's fair.

So, yeah, I've put a bit of thought into this. But, what else is a guy to do on a Saturday afternoon in the Midwest this time of year?

All things considered, I think my predictions would yield a pretty solid rookie year for Vogelbach. Yet, much of that is sill dependent upon the Mariners' patience with him, his platoon situation with Danny Valencia and whether injury becomes part of the equation.

All things being told, I guess I'm happy the Cubs traded Vogelbach to Seattle. I certainly wouldn't be typing up a blog post like this if he was still stuck behind Anthony Rizzo in Chicago.

It'll be fun to come back to this post in October and see how things shaped up. What do you think about my 0.781 OPS prediction for the Vogelmonster?  Too high?  Where would you guess him at?

The contest!
1. The blogger/reader with the closest guess to Dan Vogelbach's 2017 OPS, at the MLB level, will win a prize package* of cards.
2. No two guesses may be same, so the first one to guess the number gets it.
3. If two guesses are equidistant to the actual number at the end of the contest, then the higher guess wins. (I want to reward the guesser of the higher number for having more faith in the Vogelmonster!)
4. All guesses must be in before MLB's Opening Day.
*The prize may consist of cards from your want lists, cards of your favorite team/player, or perhaps a blaster of recently released cards.  (For the record, if I'm the closest then I'm spending the prize money I've earmarked for this contest on a new autographed card of Vogelbach. My contest, my rules!)