I Survived, So I Bought A Pack Of Donruss to Celebrate

Today was the Prom Fashion Show at the my high school, which I alluded to in my previous post. You know, the one where I had to dance in front of the student body in a tuxedo...

Did I fall off the stage?  No.  (Although, I did hear the Vegas odds makers had it as a 7:5 proposition.)

Did I sufficiently embarrass myself? Yes, but there's not need to dwell on that. (There's video out there, but I haven't seen any on social medial channels which I follow. If I ever find any I'll post it on the blog, because sometimes we all need a good laugh.)

Did the kids get a kick out of me participating? Yes. Yes, they did.  And honestly, it's all about the kids anyways.

Would I do it again? Nope. I don't think so.

To celebrate surviving the morning of inevitable embarrassment I dropped three dollars on a pack of Donruss at my LCS. 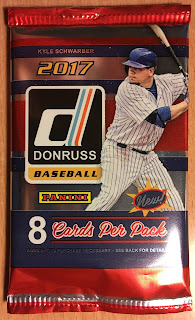 Kris Bryant is Topps' poster boy for Series 1 and Panini is battling back with Kyle Schwarber. 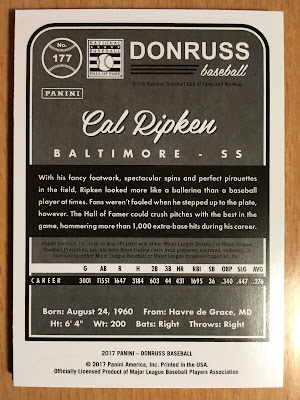 I opened up the pack and the backside of a Cal Ripken card was staring at me. Not a bad way to start a pack if you ask me.  All the card backs are done in black and white, but I've been told there are colored back parallels. Go figure. Every card company is on the parallel train these days. 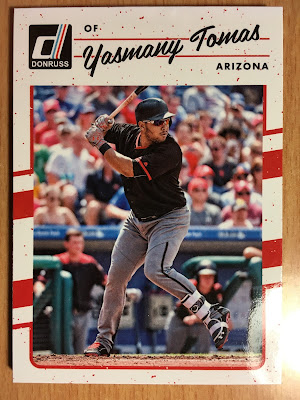 I like the design and it reminds me a little of 1990 Donruss. I'm not a fan of all the white, but I think it's an improvement over the red from 1990. 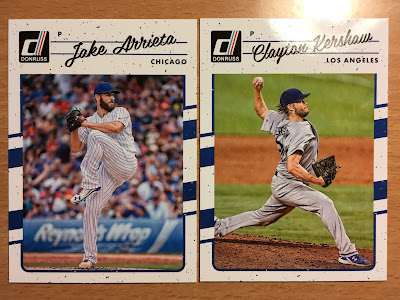 Next up are two of the NL's best pitchers. Notice how Panini has selected photos where the jersey logos wouldn't be as obvious when removed. Nice job. BTW, any pack with a Cub these days is a winner for me! 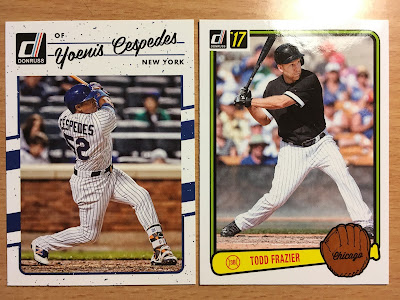 I was just talking about Yoenis Cespedes' younger brother playing in the World Baseball Classic with the card shop owner right before I opened this pack.  I do like the throw back Donruss design, although I'm not a big Todd Frazier guy. Some guy in Plainfield will wind up with the Frazier before too long.

Speaking of sending cards out in the mail... 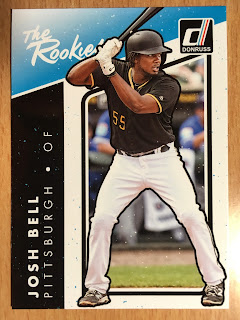 I hear there's a pretty fanatical Pirates card collector in Morgantown. I think he'll like this Josh Bell "The Rookies" card.

Kirby Puckett and the aforementioned Cal Ripken card to end the pack. 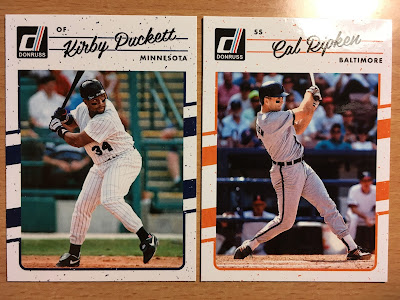 Finding these two players in a pack in 1990 would have been great. Twenty-seven years later and it's still pretty awesome.