Cubs Swag From Once a Cub

Thankfully I'm on spring break right now so I can afford to sit around at home and wait to sign for a certain USPS priority box which arrived two days ago. Actually, it caught me off guard as I was doing household chores, but I'm thankful I was at home so I didn't have to go to the post office to sign for it. 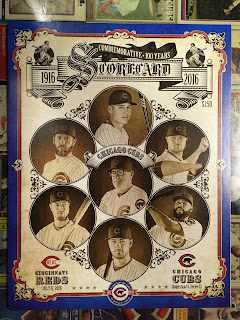 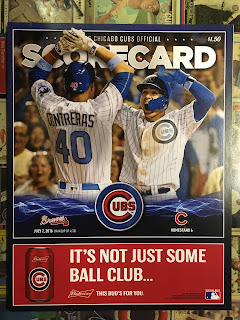 I've mentioned on the blog how I'm building a binder full of cards commemorating the Cubs World Series Championship and this package was to contain 100+ Cubs Topps Now cards which Matt, from Once a Cub, had been purchasing for me. 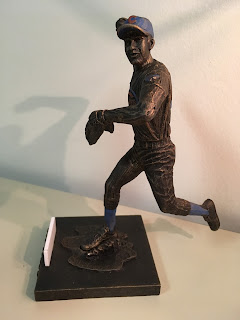 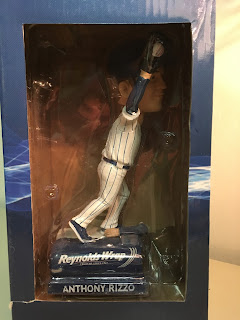 From what I understand, Matt had purchased copies of all the Cubs Topps Now cards in small quantities, which lowers the price per card somewhat. Obviously, he would set aside a copy of each card for himself, sell a couple others to recoup the money sunk in, and graciously enough, he set copies aside for me as well. 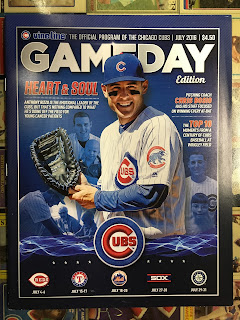 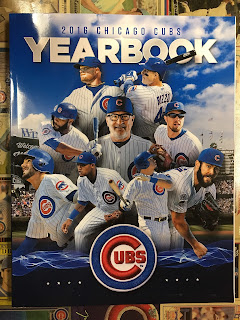 As we all know, these Topps Now cards are not cheap, especially when you're purchasing 100+. So, I did some shopping on the internet and set out around P-town on two separate occasions. My goal was to buy Cubs World Series swag to send to Matt as a thank you for all of his efforts and to compensate somewhat for the finances he committed to such a project. Matt lives on the east coast, so I was happy to go shopping and try to find some unique items he wouldn't be able to find in his area.
So, I was a little shocked yesterday to sign for a box much larger than I was anticipating. I've done enough send of cards to realize that the cards I was expecting could have fit in the smallest of flat rate boxes.

Instead, the box is big enough for my two younger cats to enjoy. They have been sitting/playing in the box almost non-stop since I opened it. 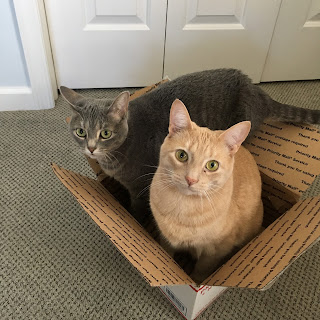 Yeah, cats are crazy.
Matt threw in a little bit of everything: a throw back jersey, a program, a Ron Santo statue, the Rizzo tarp catch bobblehead, and those really cool over-sized cards. 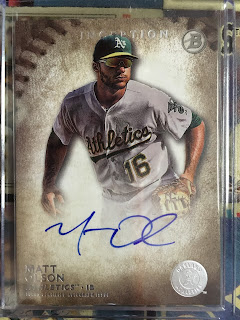 How about this one?  An autographed card of A's prospect Matt Olson!  That's pretty cool, you know, because we share a surname.

Besides the Topps Now cards, which was all I was expecting, here is my favorite: 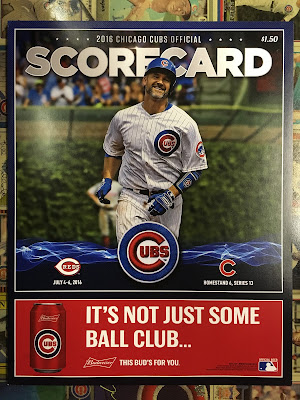 It's a scorecard with David Ross on the front! It's already in the binder right after my mini David Ross Cubs cards collection. What a great photo!

The whole package has got me thinking I can take over Rhashan's job as Director of Smiles. 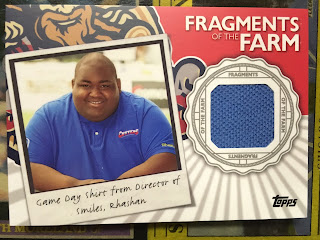 Yep, Matt sent this card, too. Which seems like a great way to close the post because of how smiley I am.

Thanks for the package, Matt! At sometime during the fall, once all the Cubs World Series cards from all the various sets are released, I'll do a post of my World Series binder.  That's a post I'm really excited about writing!
Posted by P-town Tom at 3/25/2017 10:57:00 AM