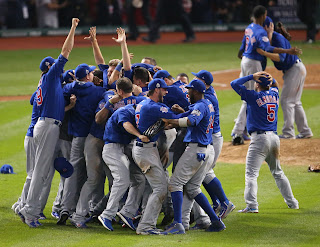 Not that I'm complaining, but that's my excuse for forgetting to do a recap of the games I attended until now. Honestly, I think it's a fairly good excuse, so I'm sticking to it.

The information in the picture below has been camping out on the sidebar of the blog all year long:

I only attended 12 professional baseball games this year, which is down from 17, 19, and 19 the last three years. Only two were at the MLB level and the rest of them were games of affiliates of the Cubs or my local team, the Peoria Chiefs.

The two MLB games I saw were both at Wrigley. I didn't think I'd make it there at all in 2016, because the logistics are becoming such a chore and the whole experience has become quite expensive. But, I was able to sneak away from my math camp in the burbs one night to watch the Redbirds beat the Cubs. Bummer. The other game was one that I will never forget. It was not a bummer.

The main reason for not attending more games? I didn't coach high school baseball the previous years so I had plenty of free time on my hands to fill. 2016 was my first year my high school's varsity assistant baseball coach. Lots of practices and about 55 games during the months of March through July took away some time I would have used for traveling to ballparks. Although, I have to say, I would much rather coach than sit and watch a game, so I'm pretty happy about the trade off.

I'm coaching baseball again in 2017, but I do have a couple of plans for this year. The South Bend Cubs travel to Peoria this year and I'd like to attend most, if not all, of those games. I have a trip tentatively planned to Atlanta to see their new ballpark when the Cubs are in town and I think Miami may be in the works as well. I think another trip to Iowa to see the AAA I-Cubs is a possibility as well.