I couldn't find a ticket protector at my LCS so I turned to the internet. Oddly enough, Amazon had the best price, which is not my experience when I generally look for card supplies or cards.

I've seen Sammy Sosa hit three homers in a game, I've seen walk-off homers, and I've even seen a no-hitter at a minor league game, but the Cubs' clinching a World Series appearance in Game 6 of the NLCS is my favorite "moment" at a live baseball game. Can an entire game be a moment?
I don't figure I'll ever see anything like that again. I typically toss all my game tickets in a box and leave them be, but this one deserves a little more.

Unfortunately, I could only get three of the screws undone, but I managed to get the ticket centered between the two pieces of lucite.
Overall, I'm pretty happy with how the ticket looks and I'll now have to find a place to display the ticket in the man room. 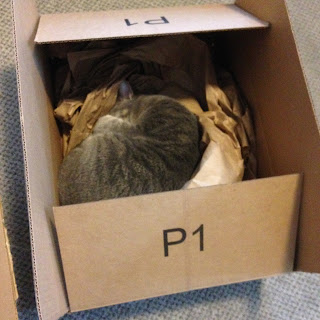 Speaking of happy... When we get an Amazon package I'm not sure who enjoys it more.  Obviously, I like getting things I need/want, but the cats always seem to get something out of it as well. 😀