Actually, it was a $25 Ebay gift card from my parents, but I'm a sucker for alliteration. Christmas cash it is!

I've never really talked about white whales, but both of these cards would qualify for this collector. 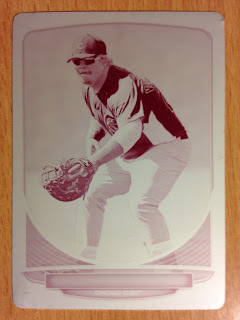 For starters I picked up my first printing plate of Dan Vogelbach, also known as The Vogelmonster. Some of Vogelbach's higher end cards have come down slightly in price and I think that is partly to due his new MLB team affiliation. I'm sorry he's no longer with the Cubs, but my wallet is happier for it.

The first rainbow I ever chased was of Dillon Maples. He was drafted out of high school and could hit 95 on the radar gun with ease, plus he had a nasty curve. He's still in the Cubs system, but in five minor league seasons he's never been above A-ball, because controlling his pitches has been something he's never quite figured out. 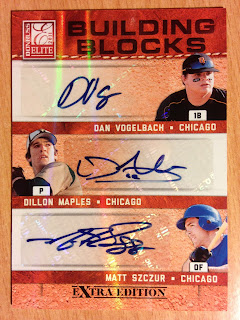 Matt Szczur has always been a favorite of mine. He's a hardworking baseball player who was shuttled back forth between AAA and MLB for two seasons before finally becoming a permanent fixture with the Cubs in 2016. He never questioned management and was always happy to do what was best for the team. He's a team first guy and well respected in my eyes. Plus he donated bone marrow to save a life and he lent his bat to Rizzo to help save the Cubs post season. 😀
I'm not going to gush on an on about the third guy on the card, but I will add that I now have 121 different cards in my Dan Vogelbach collection.

I sometimes find it difficult to by high end cards with my own money, but having to spend money makes it a little easier.  Thank you Mom and Dad for the gift card!
Posted by P-town Tom at 1/04/2017 07:20:00 PM