My mom-in-law was born and raised in Kankakee, IL (aka K3) and earned a degree from Olivet Nazarene University in nearby Bourbonnais. After Ben Zobrist signed with the Cubs he partnered with ONU to put together an advertising campaign throughout Illinois for the liberal arts university. In fact, I've seen some of the adds on the digital billboards here in P-town.

As many of us do, my mom-in-law receives an alumni magazine from time-to-time. I usually flip through the one I get from Eureka College pretty quickly and then it finds the recycling bin, but she sent me hers! Yeah, she loves me! 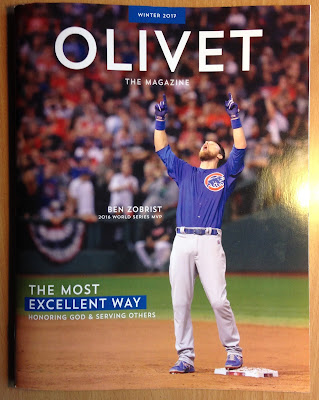 Wow!  What a fantastic cover! Wouldn't a nice blue signature look beautiful on the infield dirt? I think I found a new goal! 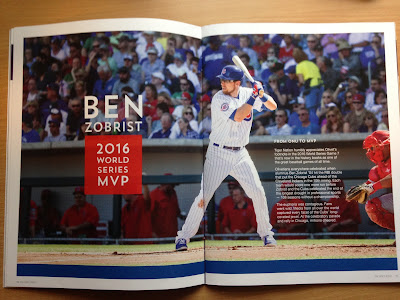 There was a six page spread on the inside, which was heavy on the pictures and had a nice amount of biographical information sprinkled in. 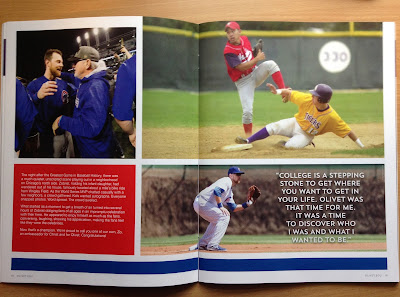 Ben spent three years at Olivet and was inducted into their athletic hall of fame in 2014. 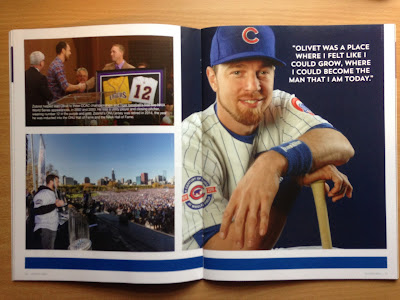 My mom-in-law sent me many newspaper articles and full newspapers about the Cubs during the playoffs. She knows what puts a smile on my face!  I'm very thankful she was willing to part with her ONU alumni magazine.

She also sent me a copy of the Chicago Tribune's 2016 Photos of the Year magazine. 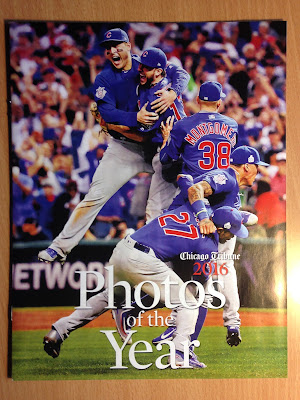 There were about a half dozen Cubs-centric photos inside and some other visually stimulating non-baseball shots as well. There were also quite a few photos with captions that described scenes after a homicide within the city. As much joy as the championship has brought the city, it has not cured its ills. Overall, the pictorial did a nice job capturing the ebb and flow of 2016 in Chicago from many different angles.

Baseball serves as a nice escape from the real world, so I'm glad the Chicago Tribune chose the cover photo they did.