Book Review: Ahead of the Curve 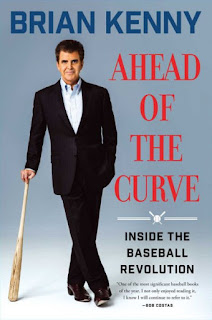 Title: Ahead of the Curve: Inside the Baseball Revolution
Author: Brian Kenny
Genre: Nonfiction/Educational

Ease of Reading: I knocked out this 368 page book in a little over two weeks. Actually, it's closer to 310 pages once you ignore the glossary of sabermetric terms, the index, and references at the end of the book. The book is broken into quite a few chapters and each chapter is often broken into subsections, which makes the book very easy to pick and put down. I often found myself thinking, "Oh, I'll read just one more section." Sometimes one more section turned into entire chapters, but that may speak more to my interest in the material than the ease of reading.

Synapse: Sabermetrics are finally taking the baseball world by storm. Kenny discusses the history behind statistics and their use in managing a baseball game or running a front office. He uses statistics to show why major league managers should never bunt a runner over to second base. He debates how baseball's year end awards are given out and specifically examines the 1941 MVP decision between Ted Williams and Joe DiMaggio. One of the chapter looks at players who should be in the Hall of Fame and he makes a strong argument for Tim Raines, who was voted in a week ago. My favorite chapter has to with Kenny's idea of bullpenning, which is really similar to the way the usage of pitchers is managed in the All-Star game.

Comments: I've been forcing my way through another book in my Kindle during the last seven months and it's been a really boring read so far. I'm very much a completest and I'm having trouble giving up on the book.
Enter my sister. She gave me Ahead of the Curve as a Christmas present and once I started it I kept thinking about it. As a baseball coach, I found some ideas I could potentially apply to my high school baseball team. As a fan of numbers and baseball, this book really captured my interest and challenged the way I think about the game I love.
I really enjoyed this book and it now has me thinking, "Life is too short to read boring books." Now I don't think I'll ever finish that other one.

Grade: Kenny's work earns an A+ from me, and I've already begun passing it around to some of my friends who either enjoy Kenny's work on the MLB Network or who think baseball with a numbers slant like myself. I'm also thinking about trying out bullpenning through an OOTP simulation. Good stuff!