Value Is In The Eye Of The Beholder

My father has offered me plenty of good advice over the years, but one statement seems to hold more truth than the rest when it comes to my hobby: "Something is only worth what someone else is willing to pay for it."

I got in touch with Corky, one of the blogging Ken Griffey, Jr. fans, through e-mail about a trade. Contained within the cards I purchased at an estate this spring I had about fifty cards of junior, which is way more than what I would know what to do with. I checked Corky's Zistle lists and found a nice stack I could send to him, which you can see on his blog, Pack War.

I didn't think the cards would net much on the open market, but I thought they might make a Griffey collector happy. All I asked was that he only send back what he thought was fair. I obviously have undervalued the prices of Griffey's cards all of this time, because the return was phenomenal!

Let's start off with Hall of Famer Hack Wilson! 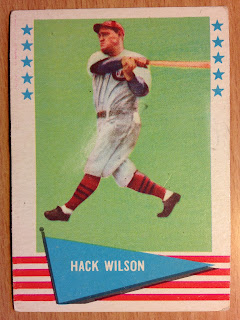 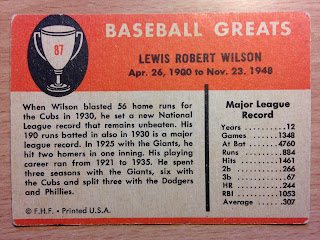 This card is from the 1961 Fleer Greats set and is ticketed for my Cubs FrankenSet. I love those stirrups/socks!

1961 not old enough for you?  How about 1933 Goudey? How did I not know that Goudey cards were printed in Canada AND had French on the back? I'll have to check, but I think this might be my first 1933 Goudey! 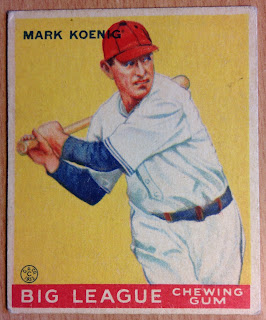 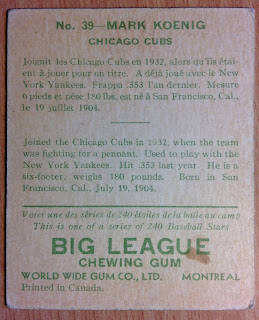 These two will go in my Cubs Hall of Fame Binder and boost the collection totals of Wilson and Ron Santo. 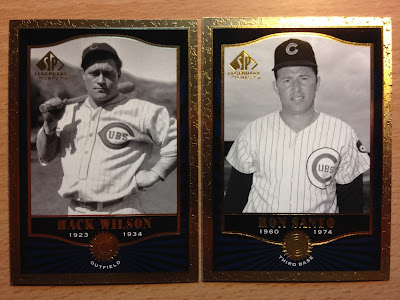 Kyuji Fujikawa was a favorite at WTNY headquarters and The Hawk always will be. 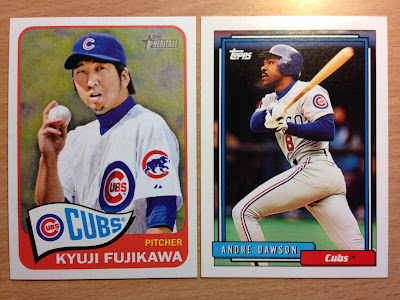 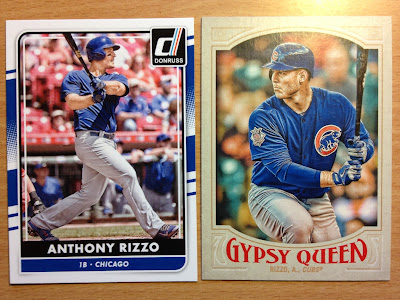 RIZZZZZZZZO!  Too many of his cards have a photo similar to the one the GQ card. I really like Donruss picture selection. 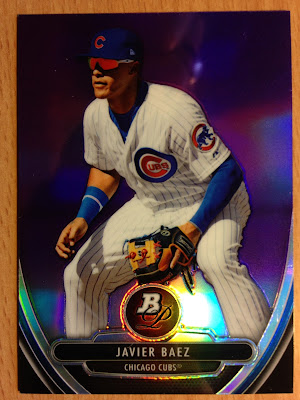 Corky also sent a few Rynos my way. I had both of these two already, but I love-love-love the sketch card and will find something cool to do with it. Shiny diecuts?  Heck yeah!  Maybe I can make a coaster out of that card? I've already done it once, but gave the last one away to a friend. 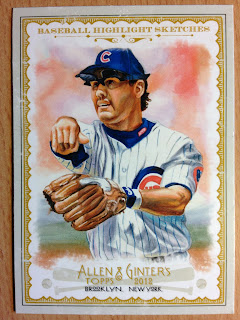 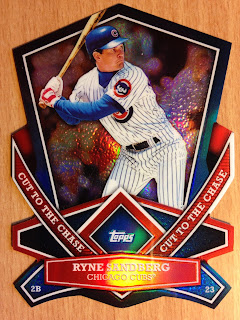 Here's a new Ryno for my player collection!  Weren't 90's inserts the best?  That's the 811th different Sandberg in my collection. 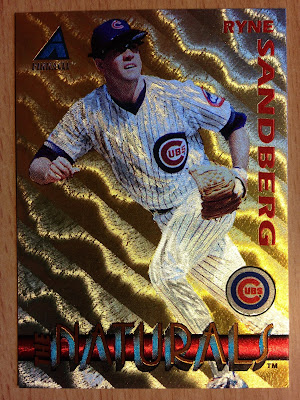 Here comes the really thoughtful part of the package. My Kosuke Fukudome collection really stalled in 2015 and 2016 as I was stuck at just over 130 unique cards in the collection.  Now I'm at 150, on the nose thanks to this trade! 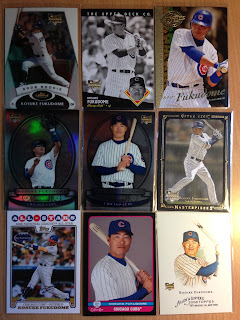 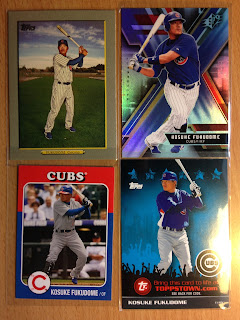 Fukudome never really performed at the level I thought he would, but I would gladly take his production during any one of his first three seasons in Chicago over what Jason Heyward has provided to this point. 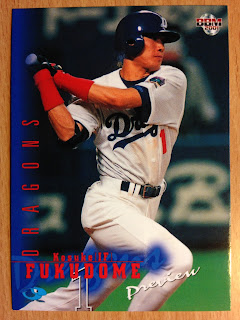 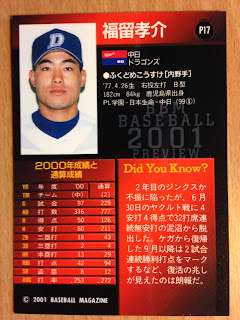 HELLO! A 2001 Baseball Magazine card of Fukodome!  He had just finished his second season with the Chunichi and was the Dragons starting shortstop.  Yes, you read that correctly! He was a shortstop!

Here are a couple more cards from 2002.  I now have thirty-four cards of Fukudome produced by either Baseball Magazine, Calbee or Konami. 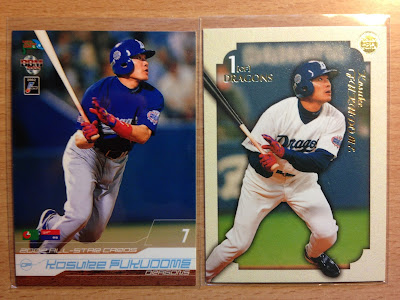 This next card is from the 2006 Flair Showcase World Baseball Classic set. It was completely off my radar and I'm so happy Corky included this card in the package. 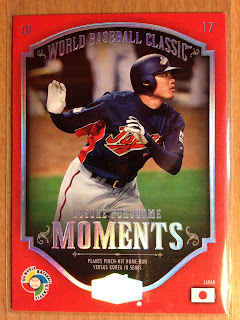 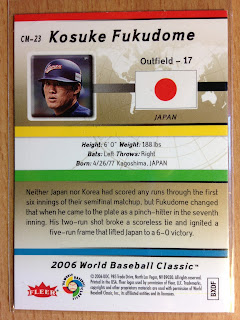 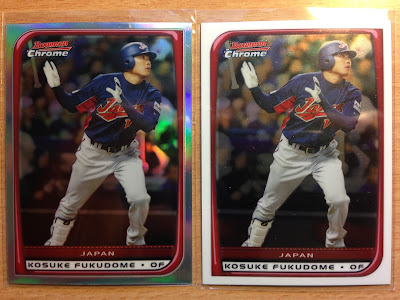 This one is from the 2008 A&G set, which is shown above, but I found an error on the back. 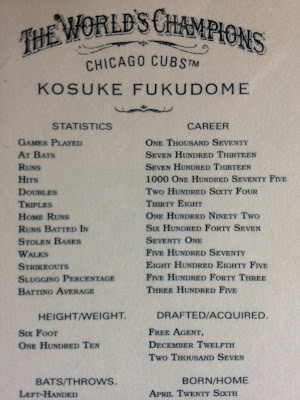 If you take his career hits and divide by his career at-bats total, then Fukudome should be have a career batting average of 1.648.  Obviously, the at-bat total must be wrong.

Lastly, a serial numbered card (64/99) with a sweet three colored "game patch" was included in the trade package. I'm assuming this piece of jersey is from a letter on the front?  Maybe the bottom left of the letter C? 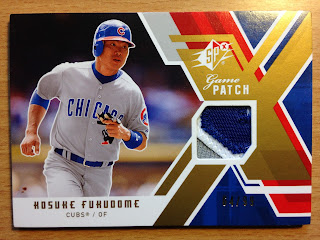 I'm a bigger fan of relics than most, but I'm of the belief that plain white or gray really don't have a place in anyone's collection. Multi-colored is where it's at!

See what I mean about the return? Who would have thought a stack of Griffey cards would net such a generous return?  Eye of the Beholder...  my dad is a wise man.

There's one more card I have yet to show, but that will be coming in a post later this week.