I know, I know.  I'm probably one of the last bloggers out there to purchase some 2015 Stadium Club.  But as an added bonus for stopping by today I also have a pack of 1991 Stadium Club.

It's time for another edition of Pack Wars! 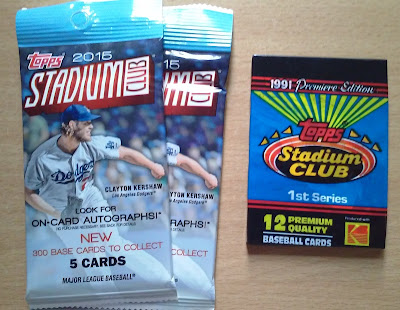 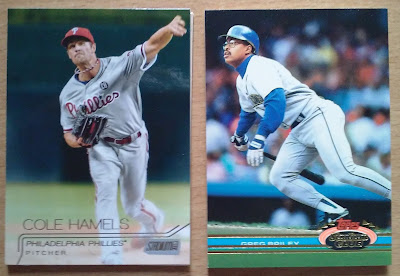 Oh, the much bantered about Cole Hamels against a Greg Briley card with a gold foil stripe through the name.  1992 Stadium Club goes down as a victim of quality control.
Score:
2015 = 1
1991 = 0 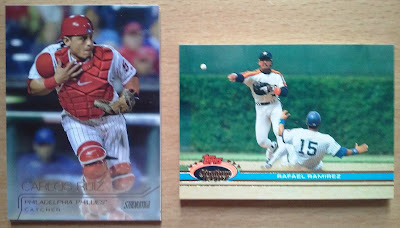 Well, shoot.  It's a Phillies hot pack.  Bleck.  1992 redeems itself with a well done horizontal shot of a double dip.  I do say, is that a Domingo Ramos cameo? 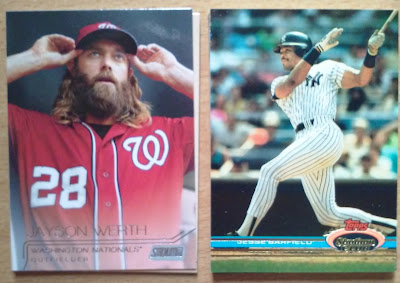 Caveman doppleganger versus the lower half of Jesse Barfield's foil name. Regardless of foil placement, it's tough to top a caveman.
Updated Scoring Summary:
2015 = 2
1991 = 1 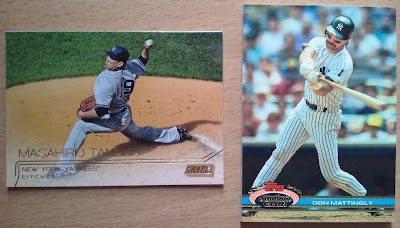 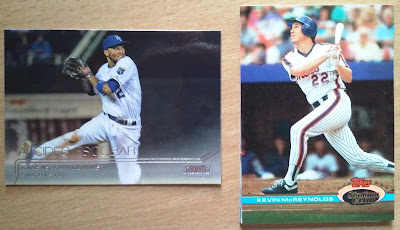 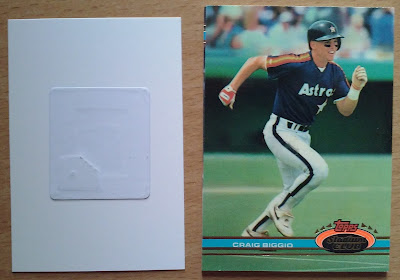 Let's face it, I did 2015 Stadium Club a favor there. It would have taken a stellar pull to beat Biggio.  The security tag took one for the team. 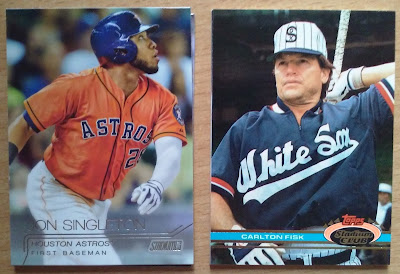 Wow.  Great match-up here.  I absolutely love the solid orange jerseys, but we're looking at another member of the Hall of Fame with a retro hat.  Just wow.  I'll give it to Fisk, but it wasn't an easy decision for this blogger.
Updated Scoring Summary:
2015 = 3
1991 = 4 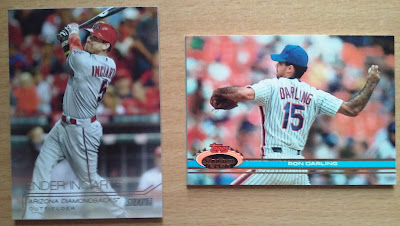 Meh.  I really have nothing to say about this match-up.  I only know about Inciarte by what I learned through Cubs broadcasts.  Ron Darling as an Athletic might win this one.  Ron Darling as a Met loses this one.  I do not like the Mets.  At. All.
Updated Scoring Summary:
2015 = 4
1991 = 4 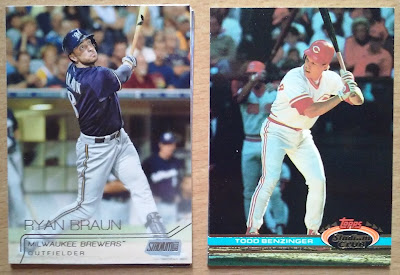 Spooky Eyes versus Mercedes.  Yes, Todd Benzinger's nickname was (still is?) Mercedes.  I'll take the nickname I've given Braun over Mercedes any day of the week. For the record, if that was Chris Sabo and his goggles in the on deck circle Mercedes would have won.  Just sayin'.
Updated Scoring Summary:
2015 = 5
1991 = 4 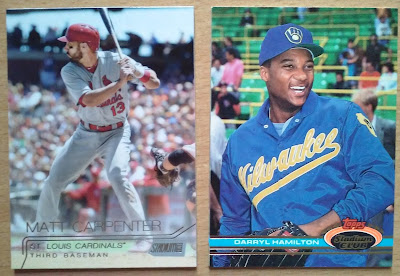 It all comes down to this match-up: 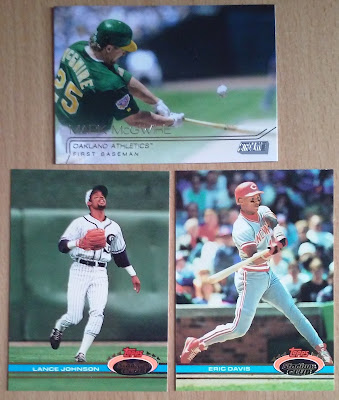 What a fantastic landscape shot of Big Mac (in an A's uniform) versus One Dog and Eric the Red.   Is it just me or are there less nicknames in Major League Baseball these days?
Eric Davis was my favorite Red from that 1990 World Series team, and that includes Piniella, Barry Larkin, Chris Sabo, and all three of the Nasty Boys. Lance Johnson is wearing a throw back AND he was a Cub.
McGwire?  There's the obvious: he was a Cardinal.  There's the other obvious: blah blah PEDs blah blah.

So, 1991 Stadium Club took down this year's edition of the product in eleven rounds.  I didn't see that one coming.  The players I pulled in the two packs of '15 really didn't give me much to work with though.  Maybe I should have waited for my LCS to open so I get some hobby packs instead?  So it goes.