Dan Vogelbach is a first baseman for the Double A Tennessee Smokies in the Southern League.  He was drafted in the second round in the 2011 June Amateur Draft out of high school by the Chicago Cubs and he immediately was touted as having one of the best "hit tools" in the Cubs' minor league system.


Vogelbach was drafted five months before Theo Epstein started preaching plate discipline.  He entered the Cubs' system with a mature approach at the plate, but from what I've read he spent the 2013 and 2014 seasons working on driving the ball to the opposite field and being more selective at the plate.  The Midwest and Florida State Leagues aren't known as hitters' leagues, but he put up some decent power numbers and about a 13% walk rate during those seasons. Pretty good for a guy

He played in the Arizona Fall League in 2014 and nearly registered an OBP of 0.400.  Yet, he doesn't get the notoriety by major Cubs' pundits for three reasons:
1. Everyone wants to talk elite talent, e.g. - Jorge Soler, Kris Bryant, Addison Russell
2. He's a big man at 250 pounds and 6' tall and he only plays first base
3. First base at Wrigley Field is occupied by Anthony Rizzo through 2021

I don't think those factors are on Vogelbach's radar.  At least his performance at the plate doesn't show any signs of it.

This year he is mashing at a whole different level.  Vogelbach has already been awarded with "Hitter of the Week" honors by the Southern League and he has yet to cool off.  Check out these statistics through the first couple weeks of the season:

Those numbers are gaudy! 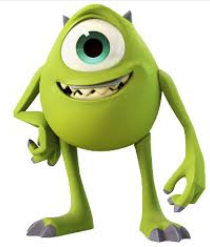 The Quad City River Bandits in 2013 posted a picture of Mike Wazokski, from Monsters Inc, on the score board when Dan Vogelmonster came to bat.  I was in attendance at the game and I have referred to Dan Vogelbach as The Vogelmonster ever since.  At the time it may have been a good-natured jab by the River Bandits at an opposing player, but I think it fits because he's a big man who can terrorize opposing pitchers.  Baseball needs more nicknames and I jumped in on the ground floor with this one.

If you're a frequent reader of my dribble, then you probably recall my affinity for The Vogelmonster.  Heck, this is my second post dedicated to Dan Vogelbach in my blog's humble history.

He may not be a former #1 draft pick and he's not going to win many foot races, but he is fun-loving ballplayer who has his head screwed on straight.  Oh . . . and yeah, he can punish a baseball.  Yep, he's my favorite player in baseball (including MLB) and I wanted to share his early success with you and honor him with my first poetry writing attempt since my high school days.


I've seen The Vogelmonster play in person in Peoria, Kane County, and the Quad Cities.  He was even nice enough to sign a card for me before a Cougars home game in 2013.  Now that he's back in the midwest, after a season in Daytona, I may have to make a special trip to Kodak, Tennessee.