Spring break came and went for this math teacher in a hurry.  Most of it is my own fault because I spent way too many hours in the workshop creating saw dust from 1" by 16" boards.

I received an uber-generous amount of greenbacks from my parents during the holiday season (read: last December), and they were earmarked for a new flat screen television for my man room.

Watching modern day programming and DVDs, which are set up for a rectangular ratio, on an almost square tube-style television was making me cantankerous. Yet, I promised myself I wouldn't purchase the new flat screen until I built a TV stand for it. 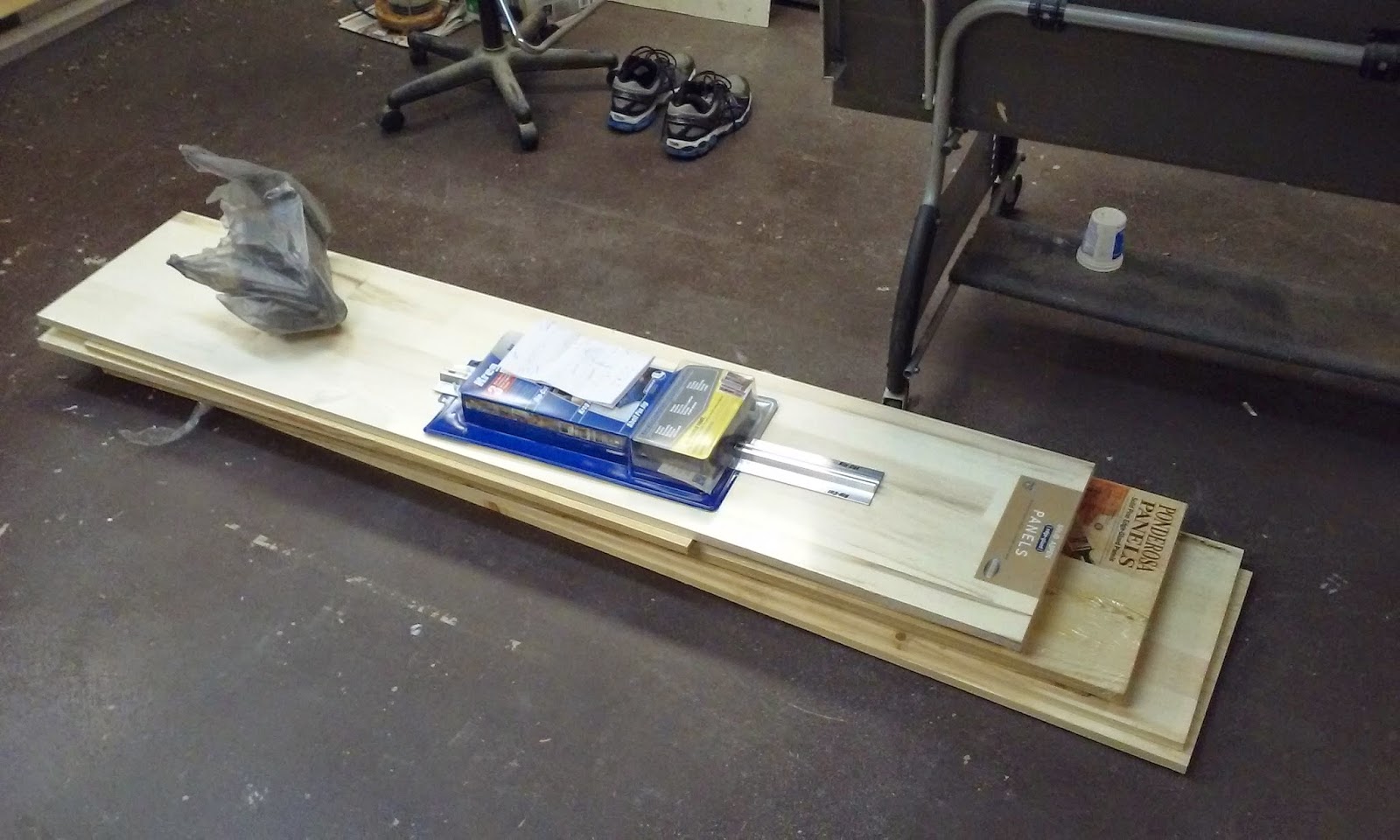 Fire up the power tools!  The pile of boards above would slowly take shape in something even my cat, Gus, would like to hangout on.  Lots of saw dust for sure! 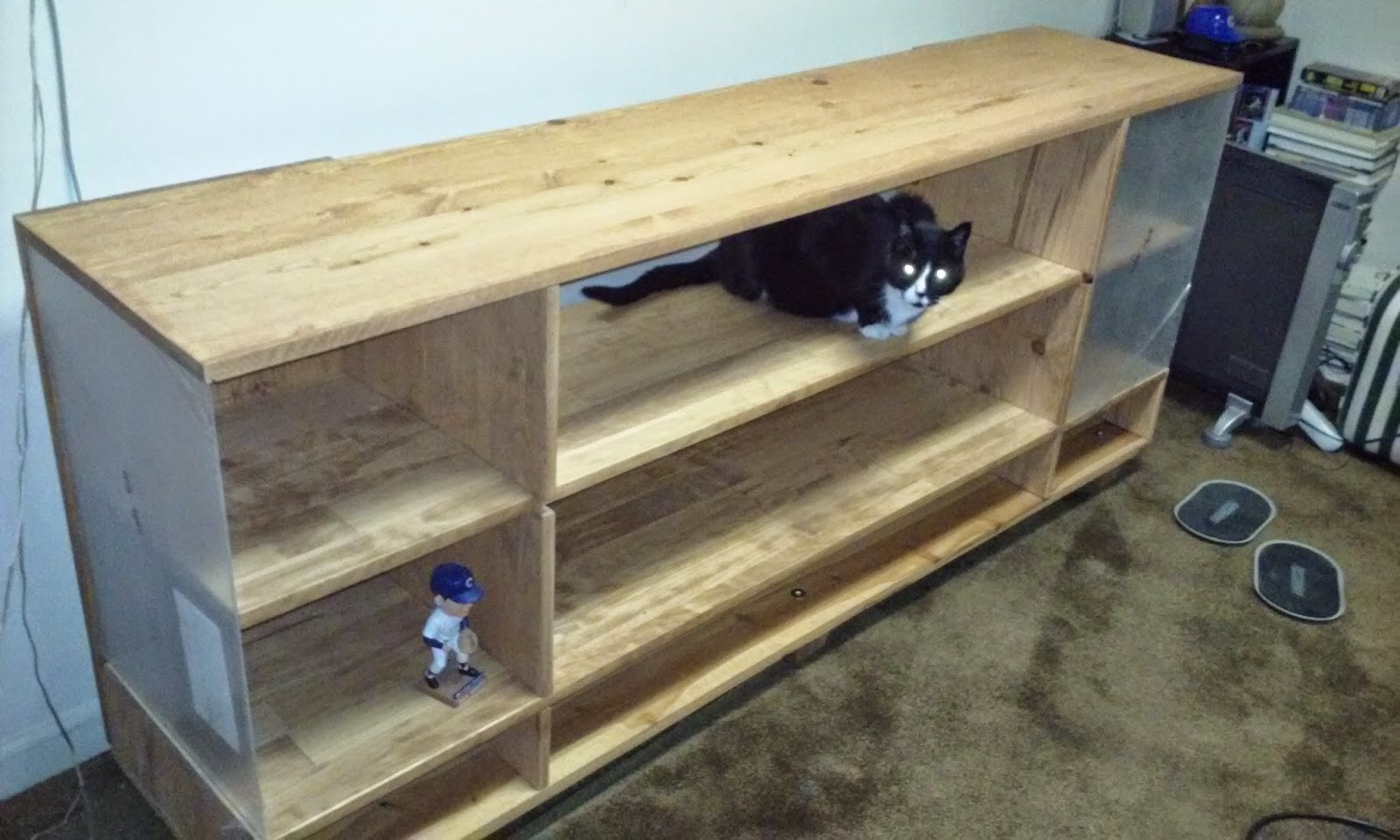 The TV stand I crafted wound up being about six feet long by sixteen inches deep.  It's mostly pine with a couple of aspen boards, and after I added one coat of stain it looks pretty sharp. 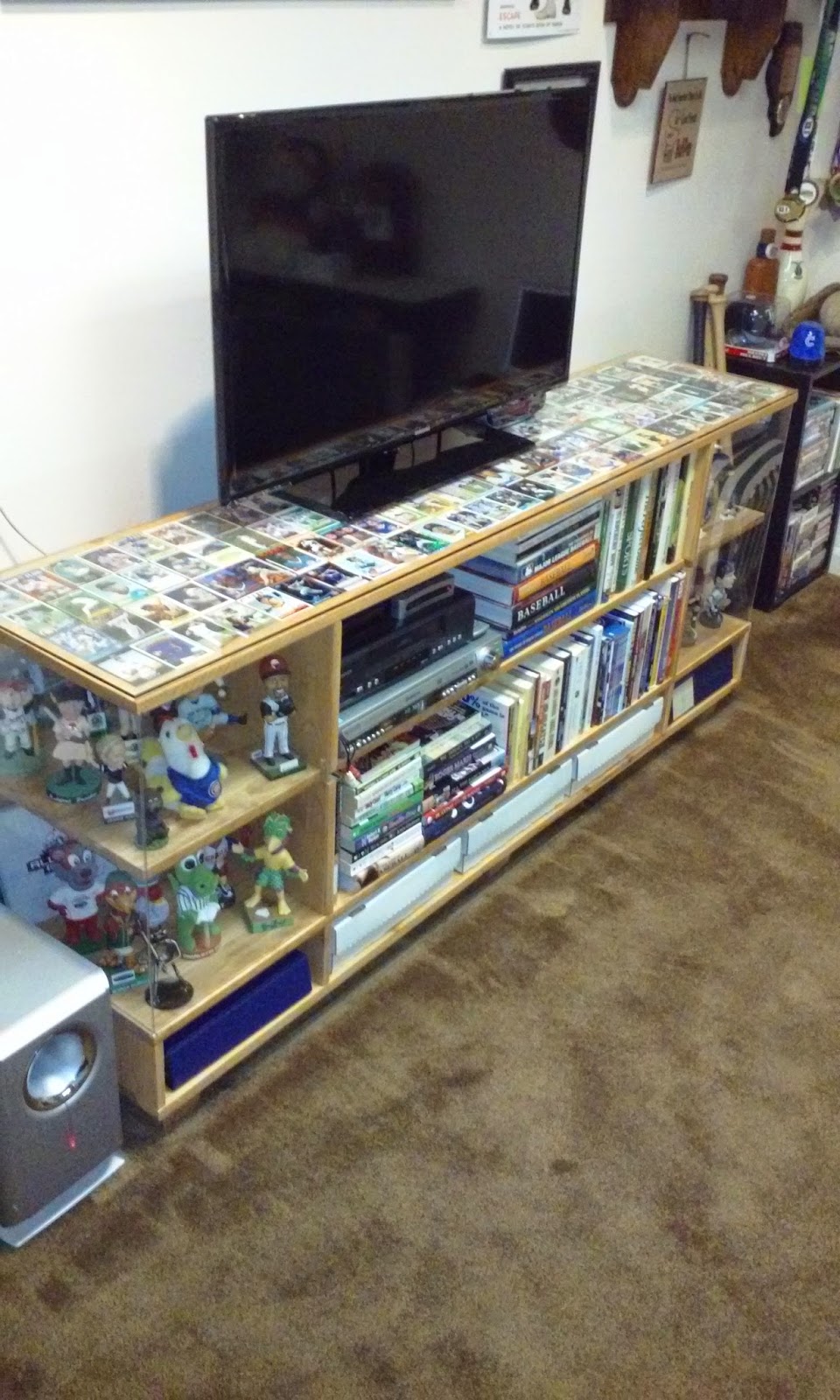 The bottom row fits my player collection binders.  The blue one on the left houses all my cards of Kosuke Fukudome, Brooks Kieschnick, and Kerry Wood.  The one on the bottom right contains over seven hundred different Ryne Sandberg cards.  The help balance all of the Cubs-goodness the three monster boxes contain all of my non-Cub singles.  Above the monster boxes are of my baseball books.  There's a stack of about six in there somewhere which I have not read . . . yet.  All in due time!

On each end I was able to take my skill saw and carve out a track for four separate sheets of plexiglass.  They slide in and out pretty easily, and now my bobbleheads won't need a good dusting so frequently. 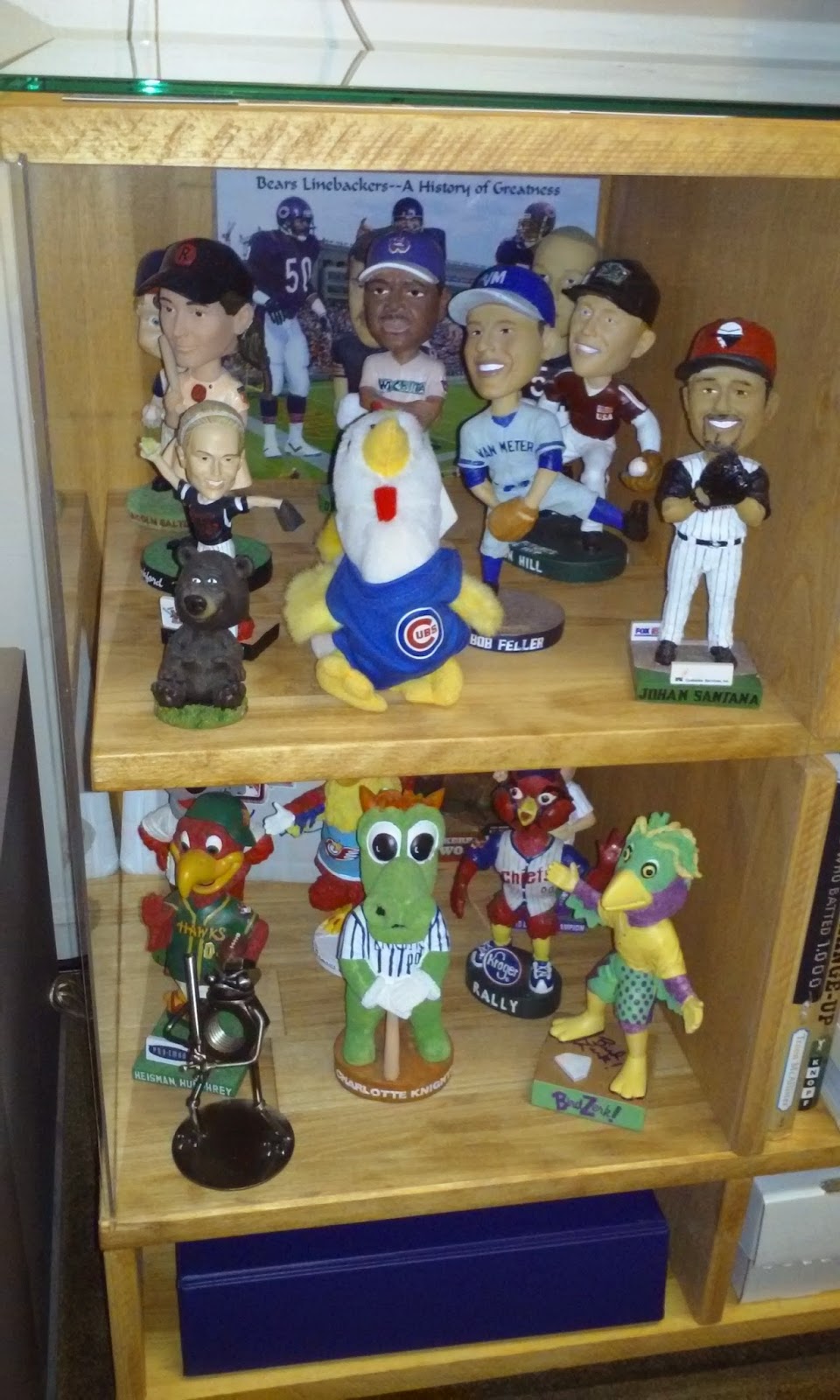 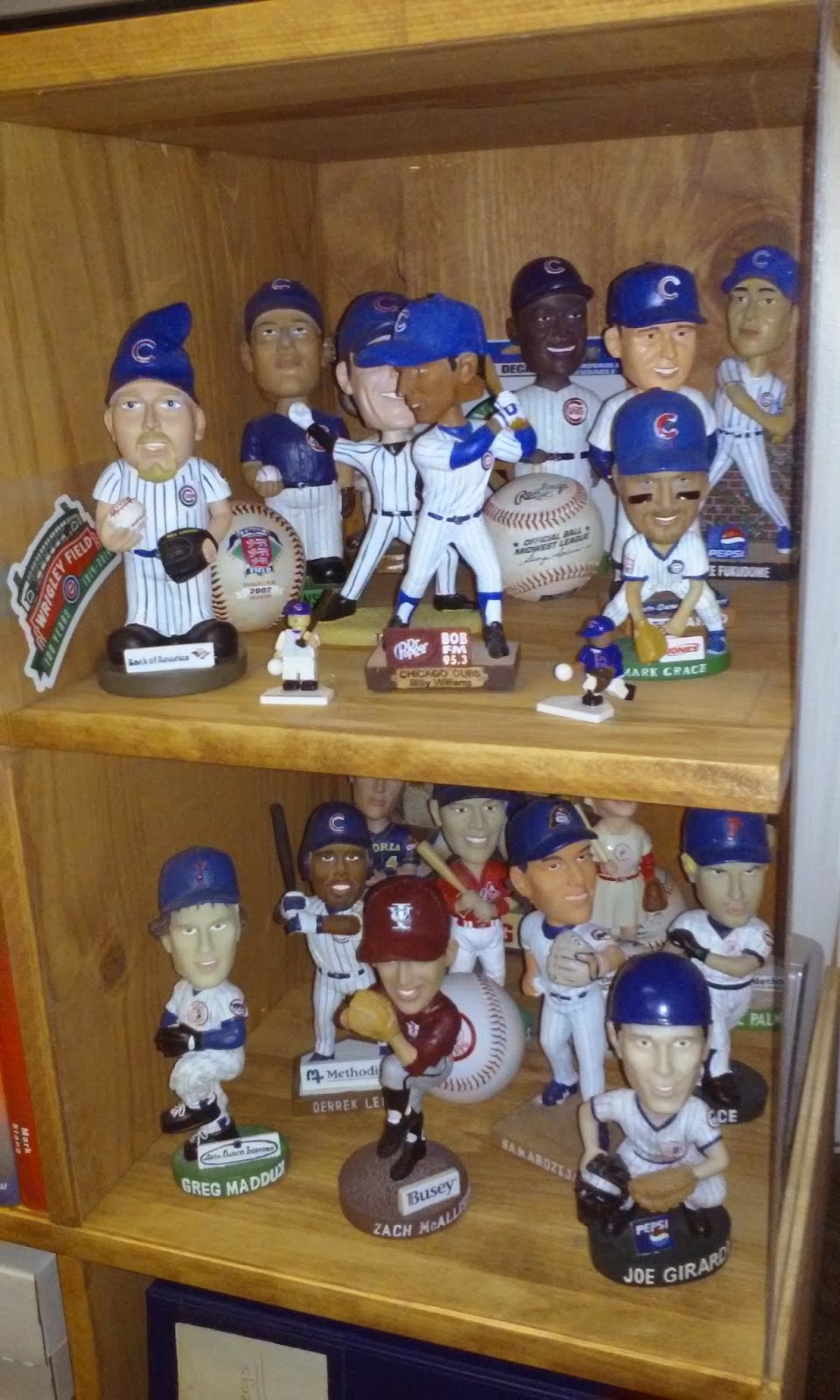 I have another thirty or so bobbleheads resting on shelves elsewhere in the room.  The guys on the left are some randomness I've picked up through friends and minor league ballparks.  The ones on the right either came from the Single-A ballpark in P-town or up the road in Rockford.

The top of the TV stand is my favorite.  The piece of glass I had cut is the most expensive piece of the stand itself, but it was totally worth it.  I needed something to protect my Cubs! 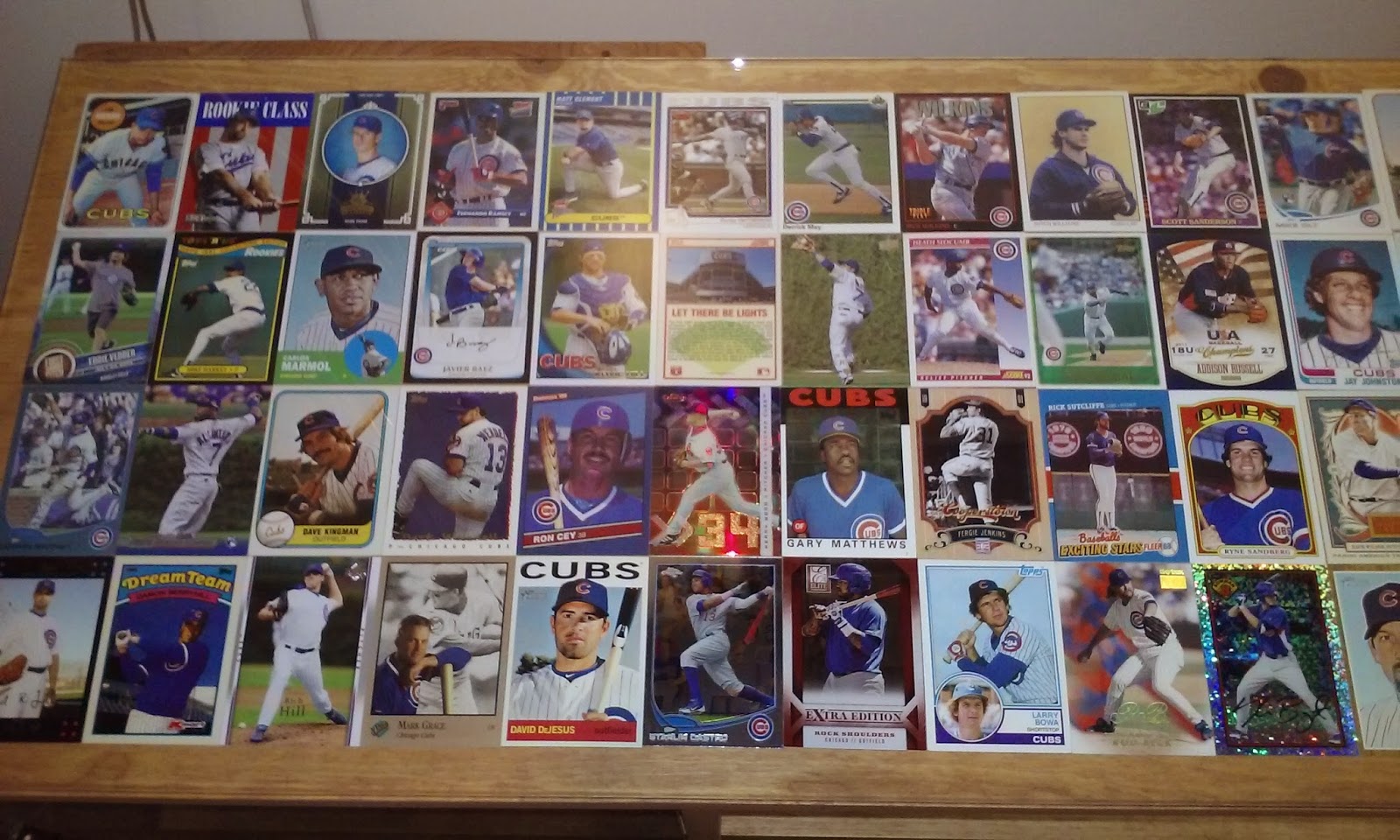 There's 112 cards in all, with 112 different sets being represented. 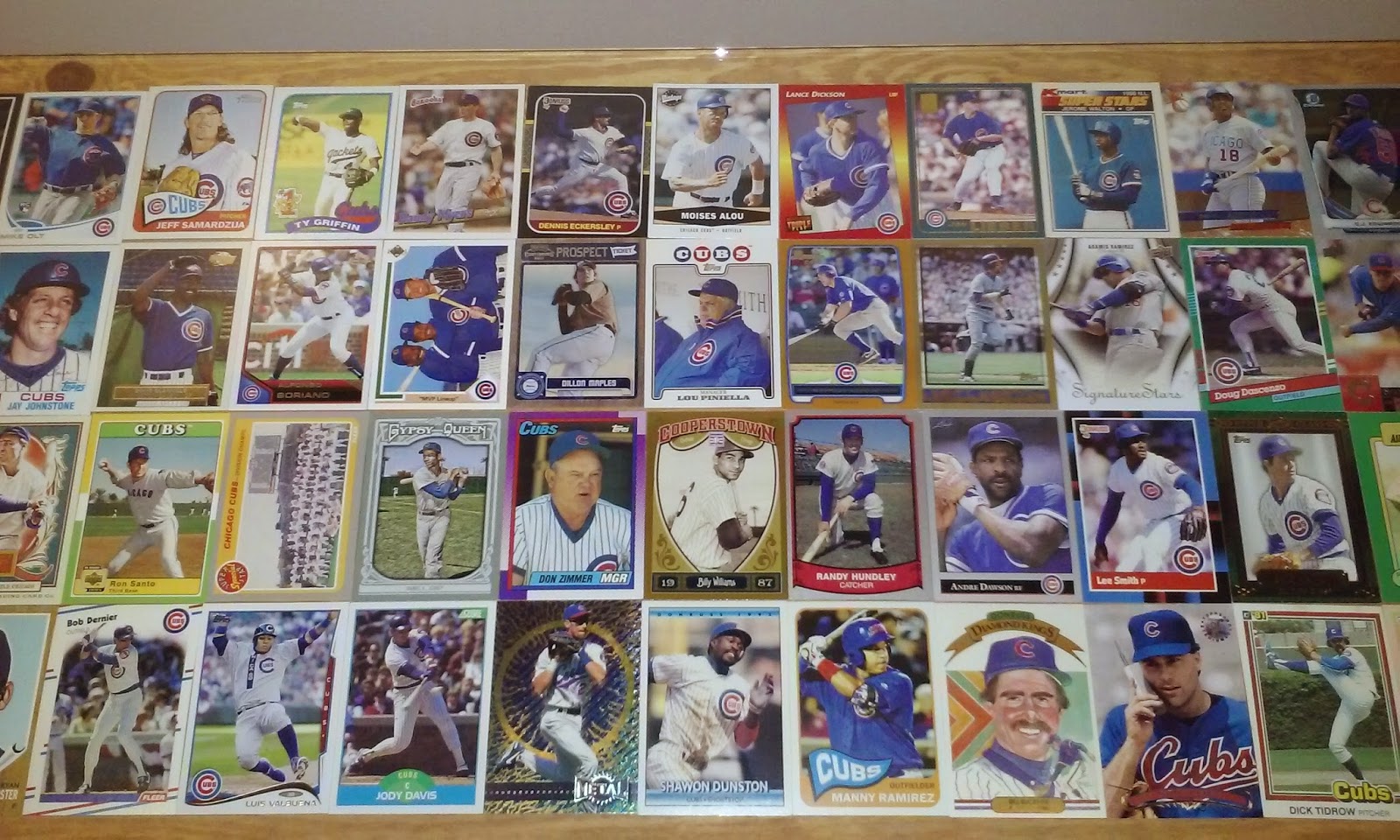 Ryne Sandberg, Andre Dawson, and George Bell can each be found twice, but only because of their 1991 Upper Deck card in which it pictured all three MVPs on one card.  Otherwise there is only one card of each player. 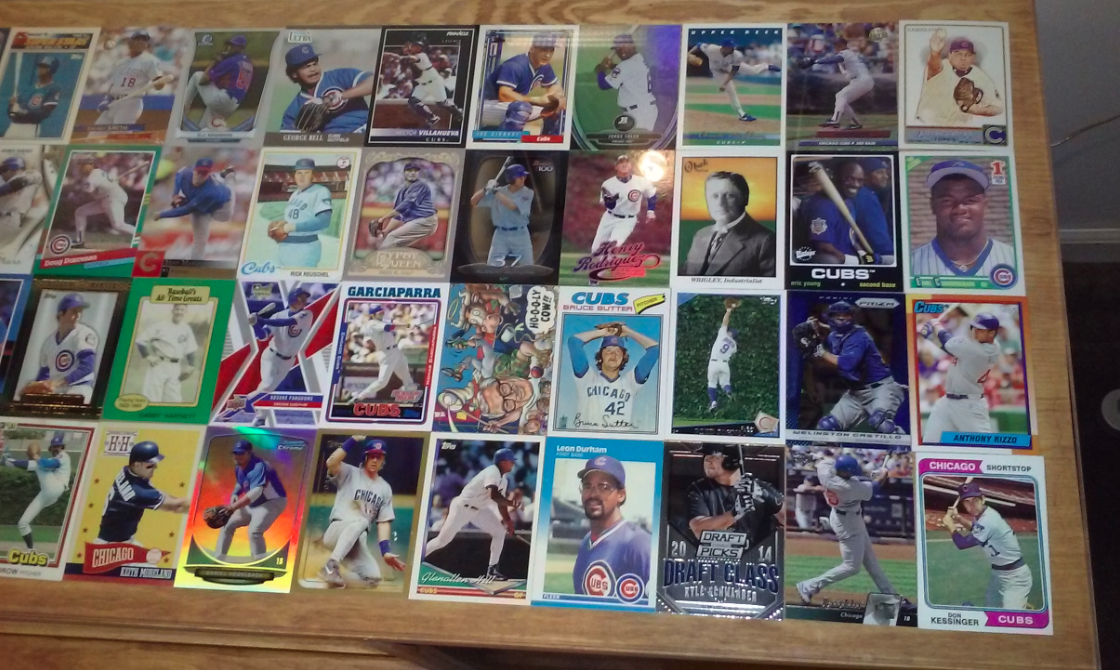 The big names are all there: Banks, Williams, Jenkins, Santo, Grace and Maddux.
Of course I had to include my prospects: Bryant, Baez, Russell, Schwarber, Edwards, Almora and the Vogelmonster.
Other favorites made the cut as well: Nomar, Reed Johnson, Dick Tidrow and his mustache, and Mitch "Wild Thing" Williams.

It took a little time to select and arrange the cards, but I couldn't be happier with how it turned out.

Now I can watch my Cubs, in my man room, on a nice new TV supported by something I constructed myself.  Give me a mini frig to store some adult beverages and it'll be my own little slice of heaven!